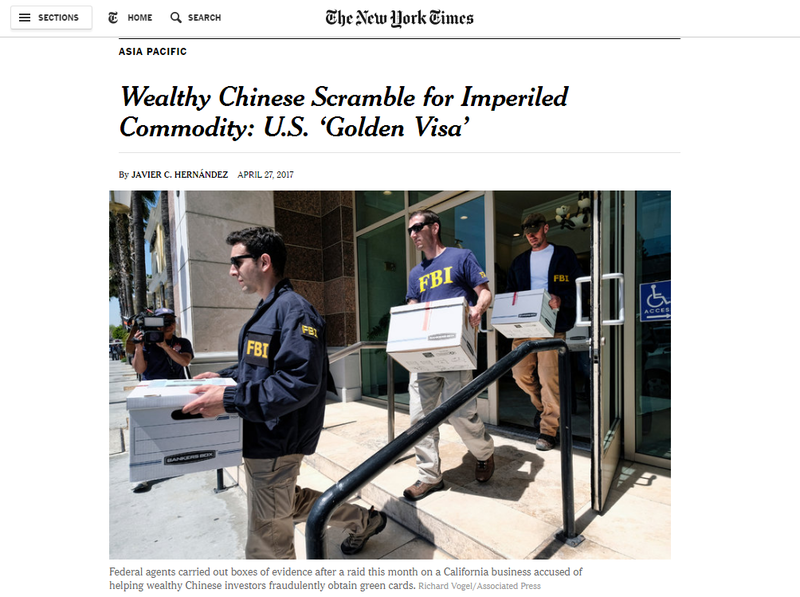 He has a lakeside villa valued at more than $3 million, two Mercedes sedans in the garage and a butler who fluffs his pillows and shines his shoes.

But Liu Xiyu, a real estate executive in Beijing, still lacks the convenience he says he most wants in life: an American green card.

Fed up with China’s rampant air pollution and the rigid school system his children endure, Mr. Liu pledged $500,000 to a California housing development last year in hopes of obtaining a special visa for investors, known as EB-5, which would allow his family to spend more time in the United States.

Now, President Trump’s vow to tighten immigration policies and new scrutiny after a series of fraud and abuse scandals have spurred thousands of Chinese applicants like Mr. Liu to seek a visa before more stringent requirements can be put in place.

Lawmakers are discussing the EB-5 program this week as they try to reach a deal on the budget and avert a government shutdown.

“I’m trying to help America’s economy grow,” Mr. Liu, 47, said. “I don’t understand why anyone would be opposed.”

Wealthy Chinese families, eager to move money out of China, have rushed to obtain green cards through the EB-5 program in recent years. In 2016, three-quarters of the roughly 10,000 investor visas issued went to Chinese citizens.

The program, sometimes referred to as a “golden visa,” has helped attract billions of dollars of investment in hotels, highways, casinos and other projects in the United States.

It has also prompted concerns about abuse, including a $50 million fraud investigation in Los Angeles this month involving more than 100 people, including Chinese citizens.

The program poses a dilemma for Mr. Trump, who has vowed to tighten immigration policies, but who is also eager to promote job creation.

Since taking office, he has sought better economic relations with China after assailing the country during the presidential campaign. And as businessmen, Mr. Trump and his son-in-law and adviser, Jared Kushner, embraced the EB-5 program to help finance real estate projects.

In China, many visa applicants hope that Mr. Trump will examine the issue from a business perspective. They say they agree with the president’s call for stricter immigration policies, but they have said he should focus on illegal immigrants, not investors.

Li Jing, an entrepreneur from Beijing who applied for an investor visa two years ago, said it was unfair that the United States let immigrants without authorization live in the country but turned away Chinese investors seeking visas through legal means.

Ms. Li invested $500,000 in a highway project in Georgia, hoping to get a green card so she could join her son, who is studying at a military academy in the state. She said a booming real estate market in Chinese cities was making it easier for families to sell homes and use the money to invest. 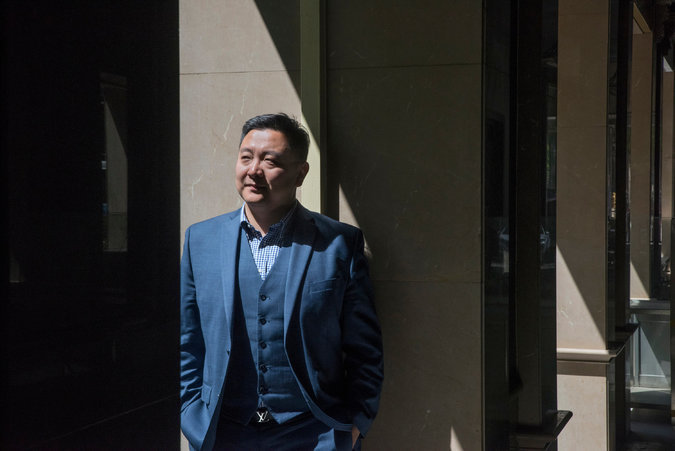 Gu Ouwen, a Beijing lawyer specializing in the EB-5 visa process. “Many are motivated by the fear that this will be their last chance to get a better deal,” he said of recent applicants.

“The most important thing is education for the kids,” she said. “Chinese parents are willing to spend anything. They’re trying to give the next generation the best they can provide.”

The EB-5 program, created in 1990, allows foreigners and their immediate relatives to apply for permanent residency in the United States if they invest $500,000 in projects that create at least 10 jobs in rural regions or areas with high unemployment. They can also become eligible by investing $1 million in projects in other areas.

The program has been so popular that there is a backlog of more than 20,000 applications, resulting in delays of up to five years for green cards. Still, many Chinese say they are willing to wait.

Wei Chi, 23, applied for an EB-5 visa two years ago after he was unable to secure a work visa through his employer. His parents in Guangzhou, a southern Chinese city, provided the $500,000 he needed to qualify for the program, which he invested in an apartment building in Washington.

“All I can do now is wait,” said Mr. Wei, a management consultant who lives in New York on a student visa.

Ms. Feinstein said the program suggested American citizenship was for sale. “It is wrong to have a special pathway to citizenship for the wealthy while millions wait in line for visas,” she said in a statement.

Some lawmakers are concerned that the EB-5 program favors big cities at the expense of rural regions — an argument that Mr. Trump may be sensitive to, analysts say, given his political support in those areas.

Rather than scrap the program, some have suggested raising the minimum amount required to invest, to $1.35 million from the current threshold of $500,000. Others support encouraging investment in rural areas by setting aside a block of visas for those who invest there.

The Trump administration has remained largely silent on the future of the program, though some analysts argue that Mr. Trump may be supportive of it, given his background in real estate. One of Mr. Kushner’s projects, a Trump-branded luxury apartment tower in Jersey City, received nearly a quarter of its financing, about $50 million, from Chinese investors.

“It could be the one immigration program that they are willing to accept,” said Stephen W. Yale-Loehr, an immigration law professor at Cornell Law School. “If done correctly, it creates jobs for U.S. workers.”

In anticipation of changes to the program under Mr. Trump, applications for investor visas in China have surged over the past several months, lawyers said.

The Chinese government, hoping to prevent a potentially destabilizing rush of money out of the country as the economy slows, has recently imposed strict currency controls. Still, investors in the EB-5 program have found ways around those rules, by using offshore accounts, for example.

“Many are motivated by the fear that this will be their last chance to get a better deal,” said Gu Ouwen, an immigration lawyer in Beijing. Wealthy families also see the program as a way of shielding their assets from political winds in China, he added.

Mr. Liu, the real estate executive, said he would continue to wait for a visa, though he said he worried about his 11-year-old son’s health and education in Beijing.

“If President Trump really wants to put America first,” he said, “he has to let Chinese investors through the door.”