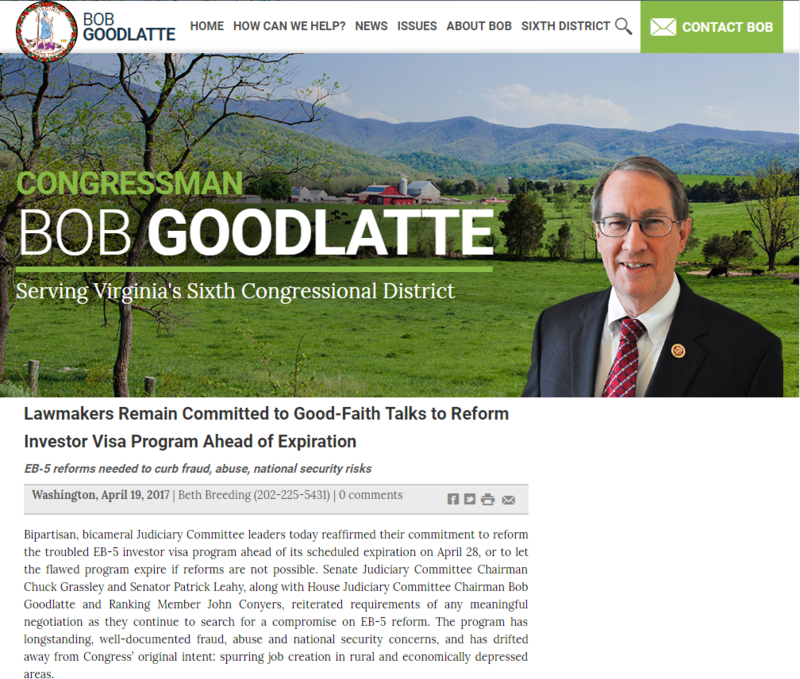 Bipartisan, bicameral Judiciary Committee leaders today reaffirmed their commitment to reform the troubled EB-5 investor visa program ahead of its scheduled expiration on April 28, or to let the flawed program expire if reforms are not possible. Senate Judiciary Committee Chairman Chuck Grassley and Senator Patrick Leahy, along with House Judiciary Committee Chairman Bob Goodlatte and Ranking Member John Conyers, reiterated requirements of any meaningful negotiation as they continue to search for a compromise on EB-5 reform. The program has longstanding, well-documented fraud, abuse and national security concerns, and has drifted away from Congress’ original intent: spurring job creation in rural and economically depressed areas.

“Despite the well-documented and rampant abuse of the EB-5 Regional Center Program that we have exposed in recent years, we remain committed to working in good faith with our colleagues and industry stakeholders to bring about much needed reforms to this troubled program. However, as we have made clear time and time again, any reforms must contain genuine and sincere changes to allow rural and distressed urban areas, the very communities this program is supposed to benefit, to compete for investment dollars. In addition, any reforms must address the many national security and fraud concerns by containing – without loopholes – compliance measures, background checks, and transparency provisions,” the lawmakers said.

“Just a few weeks ago, we were encouraged by a reasonable proposal offered by IIUSA, the nation’s largest EB-5 industry trade association, containing significant reforms to the program. The proposal was a good faith effort to address our concerns and provide long-term stability to the program, and could have served as a basis for reform negotiations.

“As we have in the past, we remain willing to work with our colleagues and industry groups to produce meaningful reform. This must include strong transparency and anti-fraud measures, meaningful investment differentials, adjustments of the investment amounts to appropriately account for inflation, adequate set asides for both rural and urban distressed areas, and an end to the program’s abusive gerrymandering practices.”

In a recent letter to congressional leadership, the lawmakers, along with Senate Judiciary Committee Ranking Member Dianne Feinstein, stated that the program should expire absent these reforms.