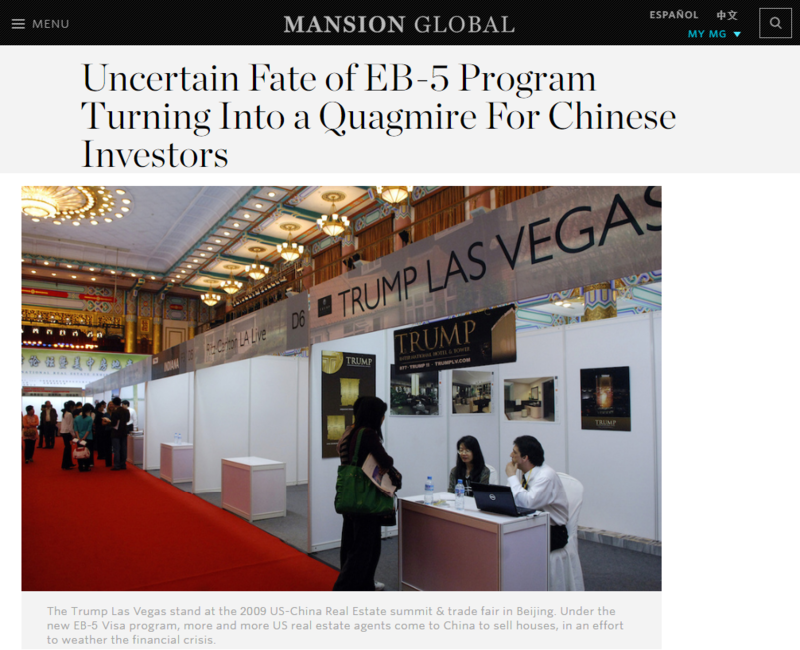 For many well-off Chinese families who’ve wanted to emigrate to the U.S. over the last decade, the EB-5 visa program has proven to be an easy solution. However, as the program is set to expire later this month, uncertainties around its fate, tangled with Donald Trump’s presidency and standing visa backlogs, are making Chinese investors hesitant to fork out their money on properties in the U.S.

Chinese “investors have been holding out for clarity in pending regulatory changes for the past few months. The uncertainties have been exacerbated by the new administration in the White House,” said Shan Chen, Head of Americas for CubeTech Global Asset, a cross-border investment advisory firm based in Beijing.

There’s no denying that the program has been popular with Chinese investors in the past. Up to 85% of foreign investors participating in the EB-5 visa program are Chinese nationals, according to the U.S. Citizenship and Immigration Services.

The EB-5, short for employment-based fifth preference visa program, was implemented by Congress in 1990 to stimulate economic development through job creation and capital investment by foreign investors in exchange for green cards. The program has since been regularly reauthorized, and starting in 1992 visa applicants could invest through designated regional centers, in addition to their own commercial enterprises. The regional center program was extended to April 28 by former President Barack Obama on Dec. 10, 2016.

Minimum investment could be raised to at least $1.35M

There are several possibilities being considered for the program’s future. Congress could extend it for another six months, raise the minimum investment requirement from the current level of $500,000-to-$1 million to $1.35 million-to-$1.8 million, or even terminate the program altogether.

Rep. Steve King, an Iowa Republican, has introduced a bill to repeal the EB-5 visa program. “Under the Obama Administration’s unconstitutional and open immigration policy, applications for EB-5 visas suddenly skyrocketed… The result is they are selling access to citizenship and selling it cheap,” he said in a statement on March 10.

Meanwhile, some Congress members and their constituents have complained that the majority of foreign investment has been channeled to luxury developments in New York, Los Angeles, Chicago, Miami and other metropolitan areas instead of areas that should be targeted for job creation.

Thanks to its popularity among Chinese investors, the number of EB-5 applicants grew tenfold from 1,258 in 2008, to over 10,000 in the peak of 2014, passing over the visa quota and therefore, resulting in a backlog.

It takes about two to three years now for Chinese mainlanders to have an I-526, or Petition for Immigrant Investor (EB-5), processed, according to Stephen Yale-Loehr, an immigration law professor at Cornell University who also practices immigration law with Miller Mayer, LLP.

Following the petition, investors will obtain a temporary green card and wait for another two years to apply for a permanent one.

Since the visa quota is for a whole family, the actual waiting time for a permanent U.S residence could stretch to seven to 10 years, according to some Chinese investors, who have taken their complaints to the Department of Homeland Security, which has been seeking public comments for proposed amendments to the EB-5 program from Jan. 19 until April 11.

While the program’s uncertainty and the long visa backlog may be a deterrent for some to apply for the EB-5 program at this time, Mr. Yale-Loehr said he’s actually seeing the opposite. According to him, Chinese investors are rushing to get their applications in before the program sunsets April 28 or before the minimum investment requirements are raised.

“I have seen more Chinese applicants lately, as was the case before the program set to expire the past couple of times,” he said.

Chinese investors have been key in funding large-scale projects

According to Invest In the USA, a Washington, D.C.-based nonprofit which advocates for the continuation of EB-5 visas, the program has generated $16.8 billion foreign, direct investment in the U.S. between 2008 and 2016. Although the programs range from meatpacking factories to small rural hospitals, the majority of the EB-5 money went into real estate developments.

Chinese investors invested approximately $3.5 billion to $4 billion in EB-5 programs in 2015 or a total of $11 billion from the start of the program in 1990 to 2015, according to Rosen Consulting Group, which, together with the Asia Society, published its first comprehensive report on “Chinese Investment in U.S. Real Estate” in 2016. About $9.5 billion of Chinese investment in EB-5 came since 2011, a period in which the vast majority of funds were allocated to real estate through regional centers.

Among the large-scale EB-5 projects that Chinese investors have funded are Resorts World Las Vegas, New York’s Hudson Yards and 2 World Trade Center developments, and Century Plaza in Los Angeles, according to the Center for Real Estate Finance Research at New York University.

If the EB-5 program is not renewed or the scope of it is changed dramatically, developers will need to find new ways to fund their projects, said Jon Ellis, founder and chief executive of Australia-based Investorist, an off-the-plan marketing firm that represented Hudson Yards and a Trump development in Miami, among others.

“It is also worth noting our developer clients don’t believe the Trump administration will dramatically change the program, as doing so would have a negative effect on a sector of the economy the Trump family is heavily exposed to,” he said.

Even if the minimum required for investment more than doubles, Mr. Ellis believes EB-5 will remain popular among Chinese investors. “In the Australian market A$5-million visas are salable albeit in a much smaller quantity,” he said. “On our platform we find U.S. property’s appeal now rivals that of Australia and we see that only growing in the future.”

In addition, strong U.S. economic prospects and well-established education systems are still a safe bet for some Chinese families. “Our outlook for the U.S. economy remains strong and we still encourage our clients take a positive view of investment opportunities in the United States,” said Mr. Chen of CubeTech.