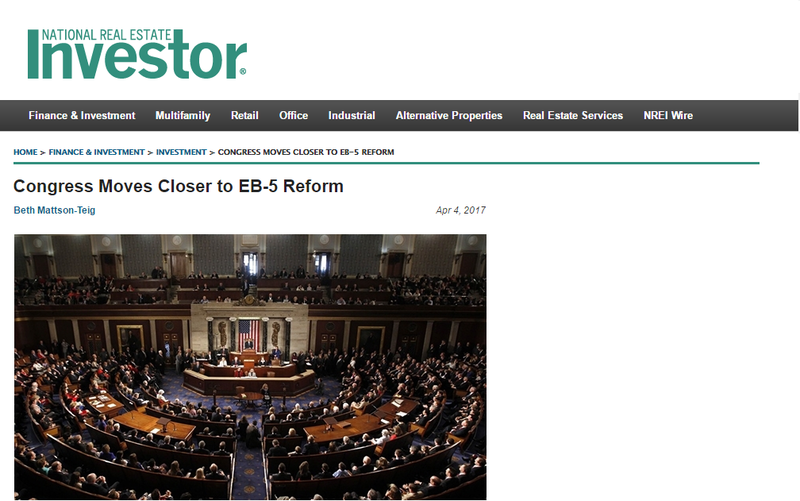 Reforms to the EB-5 Immigrant Investor program is a can that Congress has been kicking down the road for the past two years. Despite growing optimism that comprehensive changes will be introduced this year, those changes likely won’t come in time for the next big deadline—the program’s April 28th expiration.

Both Republicans and Democrats agree that changes to the nearly 30-year-old program are needed. Yet coming to terms on new rules has proved to be a big stumbling block. Instead of passing a new bill, EB-5 has been receiving short-term, three- and six-month extensions since 2015 just to keep the program running.

Given the looming deadline, it looks like at least one more short-term extension is in the cards. Players in the EB-5 industry have not given up hope of seeing a comprehensive EB-5 bill approved prior to April 28th. However, it is more likely that Congress will approve new rules along with a five-year renewal later this summer or fall, notes H. Ronald Klasko, managing partner at Klasko Immigration Law Partners LLP in Philadelphia, Pa.

First introduced as part of the 1990 Immigration Act, the EB-5 program now generates billions of dollars each year in financing for developments ranging from hotels to housing projects. Effectively, EB-5 is an incentive program for foreign investment into the U.S. that trades green cards for capital. Foreign nationals can qualify for a visa by investing a minimum of $1 million in a development, or $500,000 if it is invested in a qualifying Targeted Employment Area (TEA). That investment also must result in the creation of a certain number of new jobs.

The program is used as an economic development tool, especially in rural communities and urban areas with high unemployment. Based on a January report from the U.S. Department of Commerce, the most recent data available for 2013-14 shows that more than 11,000 immigrant investors provided $5.8 billion in capital for 562 active EB-5 projects that produced a combined 174,000 jobs. According to the State Department, 8,500 EB-5 visas were issued in 2016.

There are a number of reasons why EB-5 reform has stalled. “The biggest sticking point that has prevented new legislation is a divergence between urban and rural interests,” says Klasko. Key legislators, such as Senator Grassley (R-Iowa) and Congressman Goodlatte (R-Virginia), have been advocating for reforms that would encourage more EB-5 investment in rural areas. On the opposite side, Senator Schumer (D-New York), Senator Cornyn (R-Texas) and Senator Flake (R-Arizona) are among those who think the distribution of funds should be balanced, he says.

One of the biggest complaints about EB-5 is that some projects qualify for the lower $500,000 investment by “gerrymandering,” or cobbling together a series of census tracts in order to come up with the high unemployment numbers required for an area to be designated as a TEA.

EB-5 investors have a choice between about 500 active EB-5 projects around the country. So it is no surprise that they are gravitating to high-profile developments in major metros.

“The real issue is that EB-5 investors are at risk if the project they invest in is not successful in creating jobs,” says Catherine DeBono Holmes, a partner and chair of the investment capital law group at Jeffer Mangels Butler & Mitchell in Los Angeles. If a development fails or doesn’t deliver on creating the necessary jobs, then the investors risk losing their visas and potentially even their investment capital.

Other significant issues being discussed for reforms include raising the required investment amounts and introducing more oversight to reduce incidents of sponsor fraud or misappropriated funds. The investment amounts have remained the same since the program was introduced. So there is discussion about raising those amounts and ongoing debate on how much they should rise and when increases should go into effect, adds Holmes.

Business as usual for developers

One concern is that the prolonged uncertainty could act as a disincentive to investors. However, the uncertainty has not put much of a damper on developer demand for EB-5 money. It continues to be attractive as a low-cost source of capital. “Many of the top real estate construction projects in the country are using EB-5 money as part of the capital stack,” says Klasko.

Developers typically get a bank or life company construction loan and then use EB-5 money as a lower cost alternative to mezzanine or preferred equity. The cost of EB-5 money is generally at about 5 to 7 percent as compared to the 10 to 12 percent that is more the norm for mezzanine financing. So there is a big advantage in obtaining EB-5 money for the mezzanine portion of the capital stack.

“There is still a lot of interest on the part of developers in this program, but I think there would be more if the program were more certain,” adds Klasko.