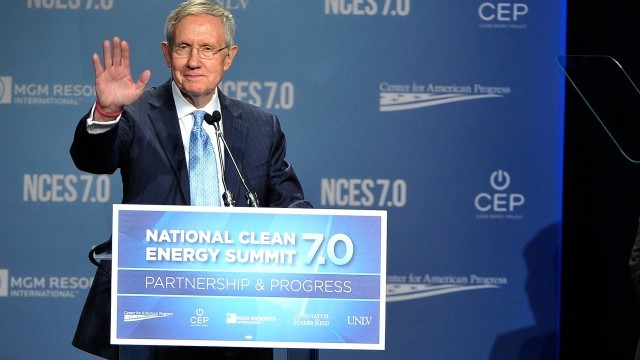 Senator Harry Reid of Nevada is calling it a career. His announcement comes one day after it became known that the formerSenate Majority Leader abused his power while in office to pressure the Department of Homeland Security to expedite foreign investor’s visas to son’s casino client.

In what can only be called an abuse of power, Reid pushed DHS to bend to his will in ways that directly benefited his political allies and family. Reid pushed for DHS to override normal procedure and expedite 230 EB-5 foreign visa applications. That freed up $115 million which the visa applicants invested in SLS Hotel and Casino in Las Vegas which had hired Rory Reid, Harry’s son, to provide legal representation for the project.

Current DHS Deputy Secretary Alejandro Mayorkas intervened to allow expedited review of applications belonging to investors to SLS Hotel and Casino which fell outside of EB-5 guidelines. Mayorkas even required DHS staff to brief Senator Reid’s people on a weekly basis for months in 2012 and 2013.The $115 million was required by SLS Hotel and Casino by February 2013 otherwise the $300 million they had raised in a “first lien” loan could be recalled by other investors.

Now, Reid is saying he won’t seek reelection. Of course the current minority leader says “I want to be able to go out at the top of my game. I don’t want to be a 42-year-old trying to become a designated hitter.”

Reid’s tenure as Senate Majority Leader will be highlighted by his combative nature where he would receive bills passed by the House of Representatives and table them on his desk, never bringing them to a vote on the Senate floor. Just this week, House Democrats were angered because they thought Reid was stifling a compromise onMedicare. He was known as President Obama’s veto during the 2014 mid-term elections.

Reid also suffered serious eye and facial injuries on New Year’s Day in an exercising accident, an injury which still affects him today. The injury could also be a major reason for his decision not to seek reelection since it has affected his vision though he didn’t list that as a primary reason for his leaving. He states that he says it is time to put Nevada and the country ahead of individuals. That is an interesting statement. Does he himself think he isn’t part of the solution?

The 75-year-old senator from Nevada surely did choose an interesting time to make his announcement. His decision to not seek another term will mean his misuse of power will be swept under the rug. That’s the way things work in Washington. His abuse of power won’t make major news circuits, won’t tarnish whatever reputation he is holding onto. He will be able to retire on what appear to be his own terms.