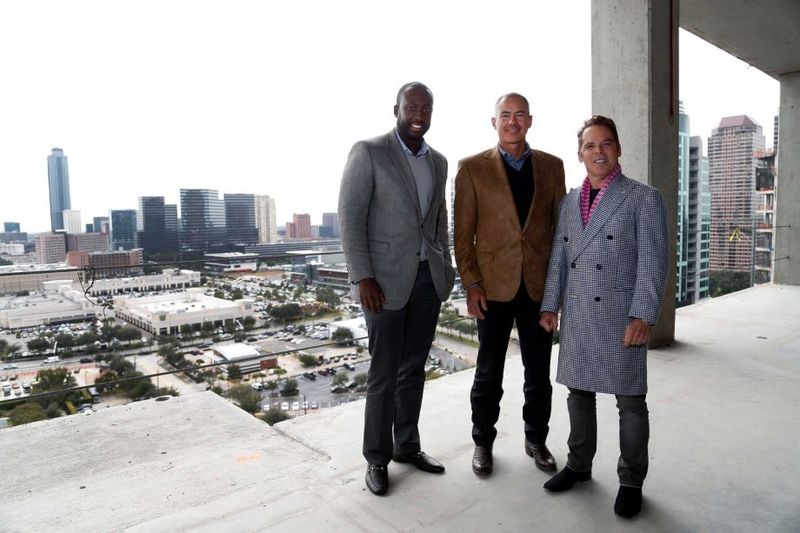 When Houston entrepreneur Roberto Contreras went shopping for capital to finance a $70 million luxury residential tower he was planning near the Galleria, he didn't look for equity in the usual places.

Instead he cast his net a lot wider, finding 20 well-heeled international investors, mostly from Mexico and Nigeria, who were willing to put up $1 million each for a stake in Houston's booming real estate market.

Those foreigners, however, weren't necessarily motivated by the hope of a tidy return on their investments. Their $1 million bought them and their immediate families the chance to immigrate to the United States. Created by Congress during a recession in 1990, a relatively obscure visa, known as EB-5, offers foreigners a much-coveted green card if they invest at least $500,000 in a U.S. business that creates 10 local jobs. Billed as American citizenship "via the red carpet," it fast-tracks the wealthy to the front of an immigration line that can drag out for decades.

At a time when coming to the U.S. legally has been its most difficult in half a century, interest in the program has skyrocketed from about 600 visas issued in 2008 to more than 5,100 this year, the most ever.

Chinese investors, buoyed by that country's new wealth, account for the vast majority, but Mexican, Iranian and Indian elites have also cashed in. For foreigners without direct family links to U.S. residents or sponsorship from a corporation, EB-5 is often the only option.

"Could Queen Elizabeth immigrate to America? No she could not, legally," said Charles Foster, chair of the Houston immigration firm Foster LLP. "But under the EB-5 program she could."

The EB-5 program has become a boon for developers who are using it to finance large-scale projects more cheaply than they could through bank loans. In Houston, with its flourishing real estate market and energy industry, the program is particularly appealing, funding projects such as Contreras' luxury tower Astoria, which is under construction and slated to open next year.

Around the country, EB-5 investors have financed spectacular developments, from revitalizing Seattle's SoDo district, repurposing military bases in California and Philadelphia, and funding New York City's high-profile Hudson Yards development, billed as the largest real estate project in U.S. history. But the program's successes have been marred by a lack of transparency and high-profile allegations of fraud and abuse.

Contreras, an immigrant from Mexico, had been on the front end of the EB-5 trend more than 20 years ago himself. Graduating from the University of Houston in 1988, he realized few avenues allowed him to remain in the U.S. legally. Foster, his immigration attorney, suggested he try EB-5, and he invested in a manufacturing company and eventually obtained his green card. 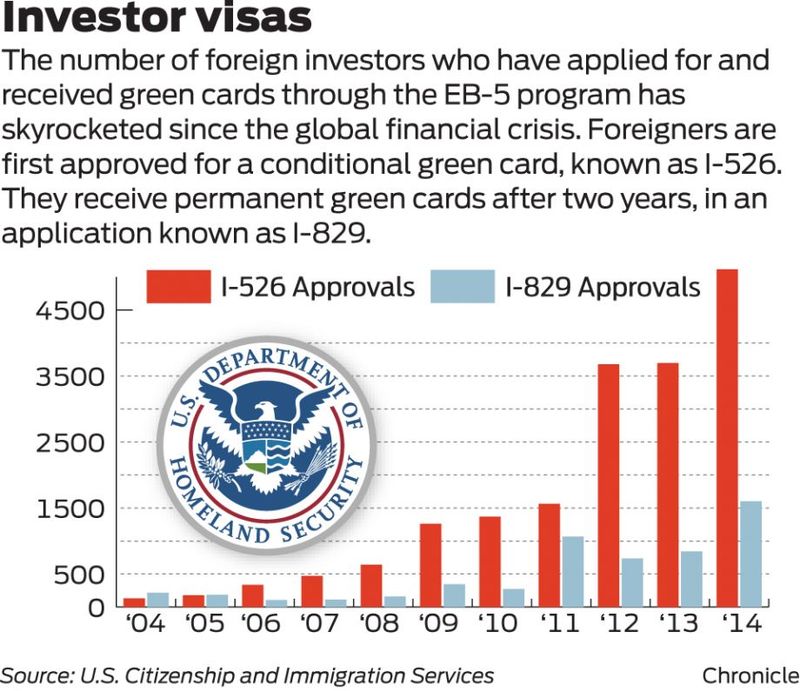 By 2008, Contreras was a U.S. citizen and successful entrepeneur looking to diversify into real estate. But the global financial crisis had left many banks unwilling to fund projects they might have previously. At the same time, the economies of nations like China and Mexico were expanding dramatically, creating a new class of elites. Wait times to obtain green cards for foreigners from certain countries like India had also grown to more than a decade because Congress limits how many people from each country can gain residency every year.

When Foster told Contreras about changes to the EB-5 program making it easier to navigate, "my brain just started working," he said.

A way for all to benefit?

He applied to open a so-called EB-5 regional center, a private company approved by U.S. Citizenship and Immigration Services to sponsor capital investment projects for foreigners. Using wealthy immigrants to fund real estate more cheaply than banks seemed like a worthy solution for all.

"I like business with good karma, helping people fulfill their dreams of obtaining a green card and at the same time finance projects and make money for everybody," Contreras said.

When he applied for the EB-5 center, there were 11 of them nationwide; today there are about 600, according to USCIS.

Partnering with Houston real estate veteran Randall Davis, Contreras found the 20 foreigners, who financed about half of the Galleria high-rise project. About a third of them have received provisional green cards, and the rest are awaiting approval from USCIS.

"We wouldn't have been able to even start construction by now because of the significant amount of equity we would have had to raise for the project if it hadn't been for EB-5," said Acho Azuike, managing director for Contreras' Houston EB-5 company. "It's a way to have cheaper capital and bring more equity to the table."

Astoria, which is forecast to create more than 800 jobs, is nearly sold out. Contreras is also developing Block 384, a residential building on an entire downtown city block, funded mostly by Chinese investors. Two of his other EB-5 projects are in the works. And like a growing wave of U.S. immigration lawyers and entrepeneurs, Contreras has opened offices in China, whose citizens made up more than 80 percent of all EB-5 visa applicants this year.

"There's a lot of interest from China but also a lot of competition for investors," Azuike said. "The phenomenon is huge."

Emboldened by their new wealth yet nervous the economy will slow, Chinese elites are particularly eager to send their children to American universities and enable them to stay if they'd like to pursue careers here, lawyers say. EB-5 investors receive green cards for their spouses and children. Immigrants from Mexico and Venezuela seeking this visa route tend to have security concerns. In general, it's a way for the world's wealthy to secure a future here, reaping in particular the benefits of American education without international fees and travel minus the frustrating U.S. visa process.

"This attracts foreign capital to invest in the United States, and it creates American jobs," said Jim Hayes, head of the Houston-based Star of Texas Regional Center. "This thing should be shouted from the rooftops. If there's any type of immigration program, it should be this."

But for seemingly every success story there is also a bust. Loosely overseen by USCIS, critics say a lack of transparency and regulation makes the EB-5 program ripe for scams.

A network of foreign agencies connects investors with developers at outrageous commissions, meaning projects and green card prospects are often misrepresented and foreigners can rack up thousands in additional fees. Many immigrants have lost not only their money but their green cards years after settling in the U.S.

"About one in two of these are very bad deals," said Michael Gibson, managing director of USAdvisors.org, which investigates EB-5 businesses for investors.

In August, in the most notorious EB-5 hoax yet, a Chicago man was indicted for defrauding about 290 Chinese investors of $160 million through a bogus hotel development purporting to be an EB-5 project. In Texas, the Securities and Exchange Commission filed a civil fraud case last year against a McAllen husband and wife, accusing them of defrauding Mexican investors in an elaborate Ponzi scheme set up as an EB-5-financed hotel.

In Houston, developer Dan Nip was one of the state's first entrepreneurs to establish an EB-5 regional center reviving a blighted part of Old Chinatown in 2007. He put together plans to build a 1,000-room hotel across U.S. 59 from the George R. Brown Convention Center and received city approval for tax incentives to encourage the development.

But eight years later, construction hasn't started, and Nip said the project is still "in the development end," blaming "market conditions" for the delay. The investor money was returned after disagreement on "some major terms," he said, declining to offer details. Nip said he has another EB-5 development planned, a hospital in Pearland, and that demand from foreign investors is outpacing supply.

"I have people walking into our office daily without appointments," he said.

"I'm concerned about this program. At some point it's just going to implode," said Paul Moody, a Houston attorney who's represented EB-5 investors. "There are just so many centers out there and not enough regulation. It's just inevitable you're going to have bad situations."

"Every day there are people out there pushing their real estate projects, their penny stocks," he said. "In the market, bad investment opportunities come with the good ones."

A December 2013 study of the EB-5 program by the Department of Homeland Security's inspector general found USCIS is "limited in its ability to prevent fraud or national security threats" and "cannot demonstrate that the program is improving the U.S. economy."

In a statement, USCIS said the program had created more than 57,300 jobs by 2013 and invested nearly $9 billion in the economy. The agency said it is implementing recommendations from the DHS report and has closed eight regional centers in 2014.

For Rifath Razzak, a 28-year-old special education teacher in Tyler, the EB-5 program was much easier and faster than other options she and her husband explored. The Sri Lankan couple came here in 2007 so he could manage some of his father-in-law's companies. Originally they were here on a temporary visa that allows businesses to transfer foreign employees for a certain period. But they wanted to stay.

A lawyer advised the EB-5 route. Razzak borrowed $500,000 from her father, a textile magnate in Singapore, and invested in CityMarket at O, a high-end redevelopment in Washington, D.C. A year later, they were U.S. residents.

"EB-5 is definitely the way to go if you have half a million dollars and want a green card," she said.