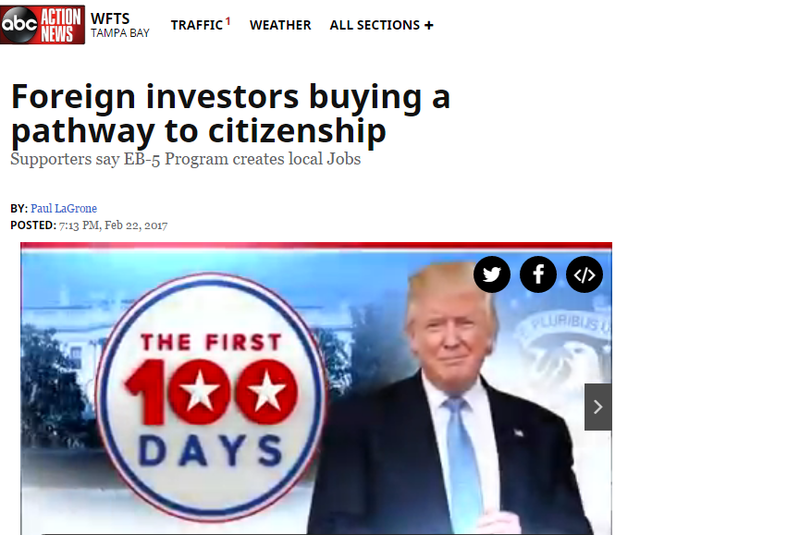 "It's a little terrifying, " she says reluctant to talk to us and not comfortable giving us her name.

She was born here, but her parents came from Honduras 30 years ago, with nothing.

"I do admire my parents for that strength."

But today their strength replaced by doubt , wondering if they are vulnerable in the new era of stricter enforcement  of existing immigration policies.

Today the young woman we met at the Tampa Immigration office spent the morning helping her mother navigate the confusing road to citizenship.

"For people who came from backgrounds that are rough and didn't have what we have it is a big accomplishment," she tells us.

But there is another path to the American Dream. A path paved with money.

"Our projects are all income producing projects," says an online video designed to recruit foreign investors.

The Federal program is called EB-5. The Department of Homeland Security oversees it and It gives rich immigrants the chance to get a green card if they invest at least $500,000 dollars into a local project that they can prove creates at least 10 local jobs.

"It's very good for the Tampa area in terms of bringing in new money to the Tampa area, " says Grace Gardiner, a Tampa Immigration Attorney who specializes in EB-5 visas.

We found projects all over the bay area bank-rolled by immigrant investors, including a new hotel in Hyde Park and a swanky new resort on Anna Maria island.

How big is it in Tampa? Gardner, "It's quite but big, the people who are doing the investing are not sharing it with the universe."

Gardiner works both sides of the immigration world: the one with money, and the one without. She says right now the latter is full of people who are concerned and confused about the rules.

"The other world of immigration a is in a state of flux and fear and people don't know what to do."

The EB-5 program is up for renewal this year in Congress and two U.S. Senators --- one Democrat, and one Republican --- have introduced legislation to end the program, saying it's flawed.

And there are questions about conflicts of interest with President Trump. At least one of his projects is reported to have benefited from immigrant investors.