China’s creating, not stealing, US jobs; See the EB-5 visa 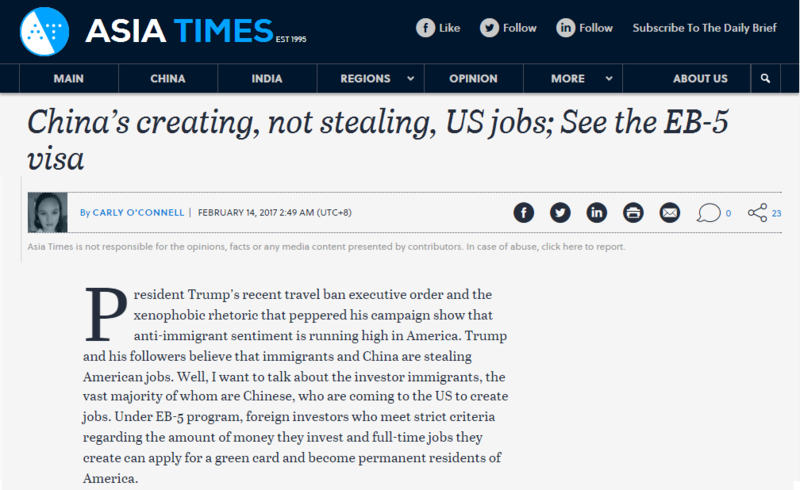 President Trump’s recent travel ban executive order and the xenophobic rhetoric that peppered his campaign show that anti-immigrant sentiment is running high in America. Trump and his followers believe that immigrants and China are stealing American jobs. Well, I want to talk about the investor immigrants, the vast majority of whom are Chinese, who are coming to the US to create jobs. Under EB-5 program, foreign investors who meet strict criteria regarding the amount of money they invest and full-time jobs they create can apply for a green card and become permanent residents of America.

The EB-5 program was created by congress in 1990 for the purpose of stimulating the US economy. In order to qualify, applicants must invest in a new commercial enterprise, as well as create jobs for US workers. The specific requirements are as follows:

According to reports published by IIUSA, EB-5 investors invested over US$3.8 billion in US enterprises in 2016. Although they do not have the number of Chinese investors for that year up yet, the number was 4,153 in 2014, making up 85% of the total. The next three highest countries of origin were Vietnam, Taiwan, and India. Only ten thousand EB-5 visas are granted each year, and for the past two years, this supply has been snatched up quickly as Chinese investors flood the market. Even Trump Tower was largely funded through investments from Chinese EB-5 immigrants!

Critics have disparaged the EB-5 program as a method for rich foreigners to basically buy expedited US citizenship and have accused it as being rife with fraud. Others laud the program for bringing in outside capital to stimulate the American economy without burdening taxpayers.

In any case, it seems hypocritical of President Trump to accuse China of damaging the US economy while simultaneously allowing his name to grace the edifice of a tower built through their funds. Furthermore, the impact of immigrants on the economy must be viewed as a multi-dimensional issue, considering benefits as well as detriments.

Many of the people accusing immigrants of “stealing” American jobs have no idea how many jobs are created directly through the EB-5 program. I know I had never heard of EB-5 visas until I began to work in a law office that dealt with them. Here’s the math: 10,000 visas per year times at least 10 jobs each, equals at least 100,000 jobs per year, probably more, let alone how many are created indirectly through the stimulation of the economy. Perhaps it is China who should be mad at us for stealing some of their richest and most economically savvy citizens.