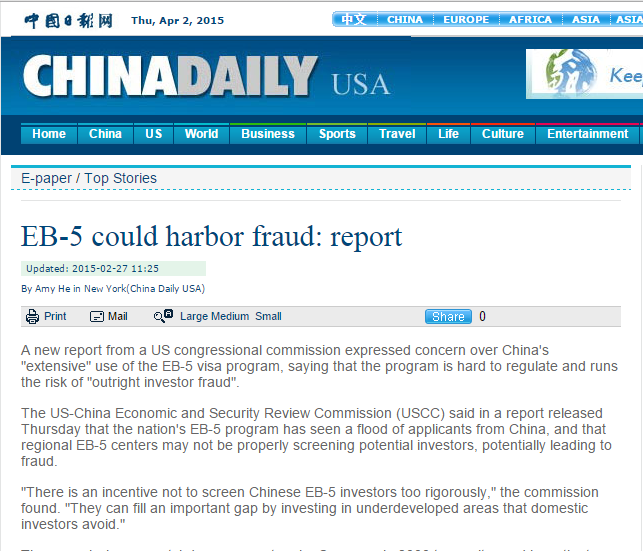 A new report from a US congressional commission expressed concern over China's "extensive" use of the EB-5 visa program, saying that the program is hard to regulate and runs the risk of "outright investor fraud".

The US-China Economic and Security Review Commission (USCC) said in a report released Thursday that the nation's EB-5 program has seen a flood of applicants from China, and that regional EB-5 centers may not be properly screening potential investors, potentially leading to fraud.

"There is an incentive not to screen Chinese EB-5 investors too rigorously," the commission found. "They can fill an important gap by investing in underdeveloped areas that domestic investors avoid."

The commission - a watchdog group set up by Congress in 2000 to monitor and investigate trade and security issues between US and China - said that Chinese EB-5 investors also benefit private property developers because the cost of EB-5 capital runs at less than half of what they would have to pay to equity investors.

The 25-year-old EB-5 program - which grants a foreign investor a visa after making a $1 million investment in an ongoing project or new business in the US that creates at least 10 new and permanent jobs for Americans - is due to expire in September. Its renewal faces obstacles under the new Republican-led Congress.

Chuck Grassley, Republican Senator of Iowa and the new chairman of the Senate Judiciary Committee, is against the program and has requested an audit of it by the Government Accountability Office (GAO).

Last September, Democrat Senator Tim Johnson of South Dakota also asked the GAO to review the program to see that it was "operating at the highest of standards" so that potential fraud was detected. Johnson said the review was necessary in order to ensure that regional centers were in compliance with the program.

Regional EB-5 centers, also known as Immigrant Investor Regional Centers, help administer the program at the local level, and Chinese investors often turn to these centers to identify projects that qualify for the EB-5 program.

The USCC report cited an investment promotion official who said that there were people in China who pretend to be affiliated with regional centers and take up-front money from Chinese investors.

As of this month, US Citizenship and Immigration Services (USCIS), a component of the US Department of Homeland Security, has approved 630 regional centers across the country, but the agency's approvals do not constitute endorsement of the regional centers' activities.

"The report is absolutely right in its concerns," said Michael Gibson, managing director at Miami-based investment advisory firm US Advisors, but the commission's suggestions on how to regulate EB-5 programs are not necessarily ideal, he added.

"The big point is that in China, the investors don't know that the agents are being paid these big commissions, they think that these agents are their friends," he said.

Gibson, whose firm works primarily with EB-5 investments, said that what's needed is more disclosure and transparency from USCIS.

"Part of that needs to be more transparency and disclosure from USCIS," he added. "We have zero transparency right now. If a regional center says to me - or a Chinese investor - 'We've done 15 projects and we've raised $300 million', we have no way of verifying that."

It's not the government's responsibility to say whether projects are good or not - that's up to investors to decide, Gibson said - but more information on projects would be helpful for all interested parties.

"Ultimately, Chinese investors need to take responsibility on who they should trust," he said.

Robert Divine, an attorney at Baker Donelson and former chief counsel for the USCIS, said that the USCC's paper confuses risk to investors with risk from investors.

"The US government does not guarantee anything about EB-5 offerings. EB-5 offerings are required to be risky. USCIS says so. EB-5 offerings are made by people, and some small percentage of people are going to defraud or take unfair advantage. The law already provides law enforcement and private right of action as for all investments. Investors should be careful and perform due diligence, as USCIS and SEC jointly tell investors," he said.

Regional centers don't do "deep" screenings but ultimately USCIS goes through every investor, "in way more detail than any investor deal I've ever heard of", Divine said.

"I mean, how much screening do we need?" he asked. "They didn't mention any of that in the paper. They just threw up this general notion that there isn't enough screening, and they don't go through what kind of screening is done." 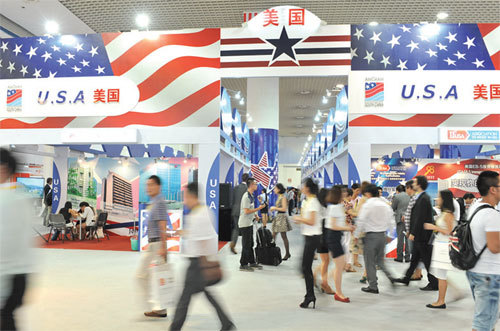