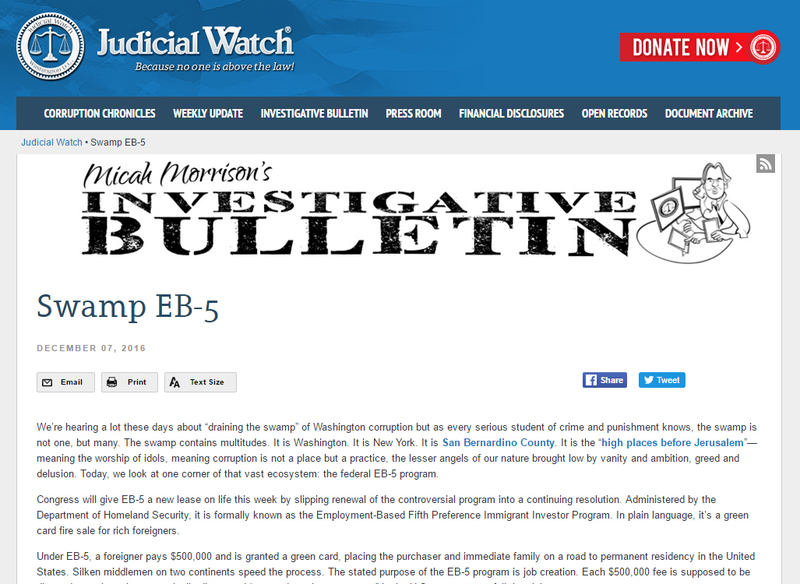 We’re hearing a lot these days about “draining the swamp” of Washington corruption but as every serious student of crime and punishment knows, the swamp is not one, but many. The swamp contains multitudes. It is Washington. It is New York. It is San Bernardino County. It is the “high places before Jerusalem”—meaning the worship of idols, meaning corruption is not a place but a practice, the lesser angels of our nature brought low by vanity and ambition, greed and delusion. Today, we look at one corner of that vast ecosystem: the federal EB-5 program.

Congress will give EB-5 a new lease on life this week by slipping renewal of the controversial program into a continuing resolution. Administered by the Department of Homeland Security, it is formally known as the Employment-Based Fifth Preference Immigrant Investor Program. In plain language, it’s a green card fire sale for rich foreigners.

Under EB-5, a foreigner pays $500,000 and is granted a green card, placing the purchaser and immediate family on a road to permanent residency in the United States. Silken middlemen on two continents speed the process. The stated purpose of the EB-5 program is job creation. Each $500,000 fee is supposed to be directed to projects in economically distressed “targeted employment areas” in the U.S. to create ten full-time jobs.

Estimates of the funds generated by EB-5 in the last decade range from $15 billion to $21 billion. The cheap financing has attracted big time commercial developers and an industry to support them. But rather than flowing to hard-hit economic zones (Detroit, anyone?) EB-5 dollars have mostly gone to support glitzy projects in places such as Beverly Hills, Las Vegas, Miami, Manhattan, Atlantic Yards in Brooklyn and Nassau Coliseum on Long Island.

As the New York Times recently noted, EB-5 “is increasingly supporting large luxury real estate projects, not the development in the rural and downtrodden districts that some say were the original targets of the program.”

According to a report by the Government Accountability Office, the program has created “unique fraud and national security risks.” Hustlers around the world are hawking the precious U.S. visas. Sales have tripled in recent years. The GAO says funding for the visas could come through the “drug trade, human trafficking, or other criminal activities.” Those claims of ten-jobs-per-green-card seem sketchy as well. The reporting on the economic benefits of the program, the GAO warned, “is not valid or reliable.” Money flowing in from China is one of the main drivers of the program.

EB-5 is a hit because the easy money benefits so many movers and shakers here in the U.S. That includes some prominent members of the incoming presidential team. Mr. Trump’s son-in-law, Jared Kushner, raised $50 million in EB-5 funds for a 50-storey luxury tower in New Jersey, Trump Bay Street. The tower adjoins another hi-rise condo, Trump Plaza Residence. Mr. Trump licensed his name to both towers but was not involved in the construction funding. Another Trump-branded project, a 33-storey luxury hotel and condo, is seeking $40 million in EB-5 funds, the Wall Street Journal reported.

Democrats are closely tied to EB-5 as well. Senator Chuck Schumer is a fierce defender of EB-5 funds for major real-estate developers. At a recent Judiciary Committee hearing on improving EB-5, Mr. Schumer mocked the testimony of a witness who spoke about putting “the projects in only poor people areas.” Mr. Schumer added, “It won’t happen—it’s not how cities are structured.”

Mr. Schumer is a longtime ally of the powerful developer and Democratic Party heavyweight Bruce Ratner, who built the Barclays Center sports arena and Atlantic Yards development in Brooklyn with more than $500 million in EB-5 funds. Mr. Ratner is also in the EB-5 business on Long Island, where he has teamed up with a Russian mogul, Mikhail Prokhorov, to seek $90 million in EB-5 funds for the renovation of Nassau Coliseum.

According to a Judicial Watch investigation, after leveraging more than $1 billion in taxpayer assistance and EB-5 funds to develop Barclays Center and Atlantic Yards, Mr. Ratner walked away from the project. He sold his stake in Barclays to Mr. Prokhorov for more than $500 million and transferred ownership of Atlantic Yards to a business controlled by the Chinese government for $208 million.

In a little noticed twist, most EB-5 money appears to end up in New York City. No wonder Chuck Schumer loves it!  Recent data, cited by David North of the Center for Immigration Studies here and here, suggests that about 56% of EB-5 funds—more than $10 billion—went to the city, mainly Manhattan. Mr. North drilled down into a study by two New York University scholars, Jeanne Calderon and Gary Friedland, who painstakingly compiled data from 52 large EB-5 projects nationwide.

Mr. North’s conclusion? The Obama administration is hiding a “huge tilt” of EB-5 funds to New York. The “Obama administration,” writes Mr. North, “…has refused to produce statistics on the distribution of EB-5 moneys geographically…. Whether the administration did this deliberately or not, the result has been to mask the enormous tilt of these funds—originally designed to serve depressed areas—to prosperous areas such as Park Avenue and Wall Street.”

All this is perfectly legal, bringing us back to the question of our lesser angels, to the dilemma of corruption as ethical misconduct, not law-breaking. Some swamps are harder to drain—or even to map—than others. But over at ecosystem EB-5, the solutions seem pretty easy for a new president pledged to combat corruption. The system should be tightened to get rid of the grift. Investments should be directed toward towards truly needy areas in the United States. Mr. Trump should order his agencies to ensure full transparency on EB-5 statistics. And both the president-elect and his son-in-law should set an example of high ethics by getting out of the EB-5 business.