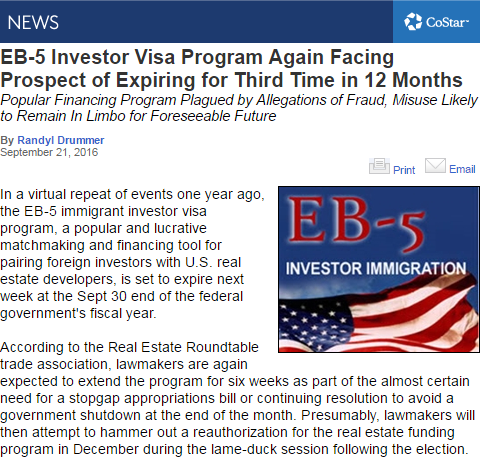 In a virtual repeat of events one year ago, the EB-5 immigrant investor visa program, a popular and lucrative matchmaking and financing tool for pairing foreign investors with U.S. real estate developers, is set to expire next week at the Sept 30 end of the federal government's fiscal year.

According to the Real Estate Roundtable trade association, lawmakers are again expected to extend the program for six weeks as part of the almost certain need for a stopgap appropriations bill or continuing resolution to avoid a government shutdown at the end of the month. Presumably, lawmakers will then attempt to hammer out a reauthorization for the real estate funding program in December during the lame-duck session following the election.

Efforts to reform the EB-5 program and full reauthorization last year failed, resulting in a nine-month extension through Sept. 30, 2016.

With Congress debating the issue at least three times this year alone, EB-5 supporters, critics and legislators can be forgiven if they feel like they're trapped in a kind of "Groundhog Day"-style time loop, with the program again stuck in the overall budget impasse.

In a Sept. 7 letter addressed to the House Judiciary Committee and other congressional leaders, a coalition of EB-5 advocacy groups and Real Estate Roundtable, urged lawmakers to “take all necessary steps” to ensure that the EB-5 program does not expire on Sept. 30.

"Any lapse in the program, at a time when thousands of foreign investors have invested in American projects and remain in the midst of the immigration process, would be immensely disruptive to the investors, the progress of U.S. projects into which their funds are invested, and the jobs they are creating," the coalition said. "We recognize the need for and fully support reforms to the program to better safeguard national security and deter fraud. There has long been broad bipartisan and industry support for these measures."

However, reform efforts have apparently bogged down again. Legislation sponsored by House Judiciary Committee Chairman Bob Goodlatte, R-VA, stalled in the House of Representatives last week, with lawmakers unable to agree on provisions intended to curb alleged fraud and redirect some of EB-5's benefits to rural areas or to locations with high unemployment.

"Every day, it becomes less likely that EB-5 will be on the agenda of lawmakers," said Douglas Hauer, member of Mintz Levin's corporate and securities and immigration practices in Boston. "With the presidential election looming in the background, EB-5 won’t be near center stage. For now, the status quo may continue for many months and into 2017."

The EB-5 program was created to stimulate the US economy through job creation and capital investment by foreign investors, primarily in rural and economically distressed areas. The program offers permanent US residency to foreigners who invest at least $500,000 in certain businesses or projects that create a certain number of jobs.

However, the ability of lightly regulated 'regional centers' that administer the program to determine the Targeted Employment Area (TEA) in which the program is available has led to charges of favoring high profile real estate developments in urban areas over rural ones.

Congressman Goodlatte’s believes the program is dominated by high-end projects by large developers who "gerrymander" project borders for their own benefit. Under his bill, the program would reserve 40% of the 10,000 EB-5 visas awarded annually for projects in "targeted employment areas" (TEAs) with jobless rates of at least 150% of the national unemployment rate.

Once again this year, Sens. Charles Grassley, R-Iowa, and Patrick Leahy, D-Vt. have led bipartisan efforts to reform and reauthorize the bill. However, another bipartisan group of senators representing the interests of urban developers, including Charles Schumer, D-NY; and Senate Majority Whip John Cornyn, R-TX, have successfully resisted the restrictions.

Calls for reform of the program escalated again last spring as one of the largest EB-5 fraud investigations to date unfolded in Sen. Leahy's home state.

On April 14, the U.S. Securities and Exchange Commission froze the assets of Jay Peak Resort, a Vermont-based ski resort, alleging that resort business entities and their principals allegedly made false statements, omitted key information and misused $200 million raised from hundreds of investors through the immigrant visa program to develop resort projects.

William Stenger of Newport, VT, CEO of Jay Peak Inc., announced in a statement earlier this month that he has entered into an agreement with the SEC to resolve the case without admitting or denying the allegations. Miami businessman Ariel Quiros, owner of a holding company that included Jay Peak called Q Resorts Inc., has filed a motion to dismiss the lawsuit.

Concerns about investor and securities fraud and abuse have dogged the program since at least 2011, when lack of conventional financing from banks and other traditional lenders prompted developers to explore other options to fund new development. EB-5’s popularity skyrocketed, drawing the attention of the nation’s largest commercial developers, including Related Cos, which used the program to finance part of its $20 billion Hudson Yards project west of Midtown Manhattan.

The annual contribution of EB-5 funding to overall direct foreign investment in the U.S. increased from about $320 million in 2009 to $2.56 billion in 2014, before spiking 78% to $4.38 billion in 2015, according to IIUSA Marketplace, an EB-5 market exchange and advocacy group.

Despite a slowing Chinese economy and government restrictions on making capital out China this year, foreign entrepreneurs filed 8,638 EB-5 immigrant applications In the first three quarters of the 2016 fiscal year ending June 30, up from 7,798 applications filed during the same nine-month period in fiscal-year 2015, according to data released this week by the USCIS.

Applications peaked at 6,575 in the final quarter of fiscal-year 2015 ending Sept. 30, 2015, for a total of 14,373 immigrant petitions, setting single-quarter and annual records, as foreign nationals rushed to file before the first potential expiration of the program a year ago. Another 6,277 applications were received the first quarter of fiscal-year 2016 ending Dec. 31, 2015 before plummeting to 848, their lowest level in several years, during the first three months of 2016.