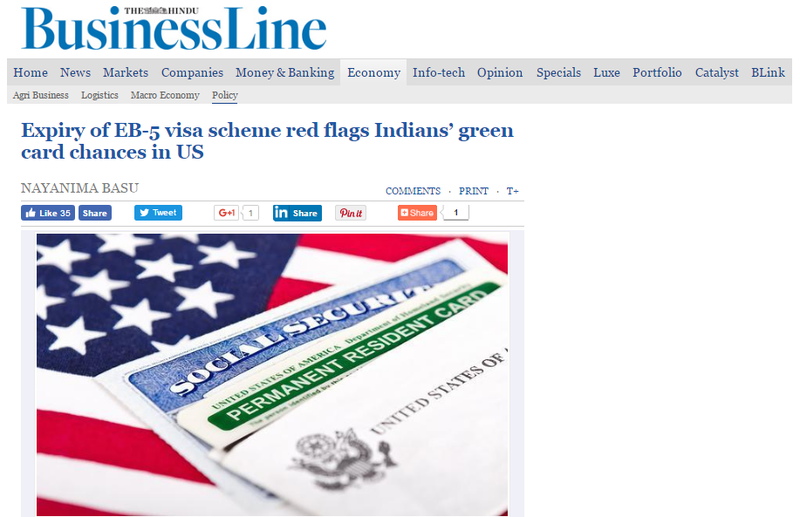 The popular US investor visa scheme EB-5 is scheduled to expire on September 30. And its expiry is expected to impact the chances of Indians to obtain green cards.

Although it is still unclear whether the US government will renew the programme, there is a good chance that the new EB-5 investor visa programme will have an increased investment amount of $800,000. Such a hike is expected to deter many Indians from opting for the scheme.

The EB-5 visa programme was launched in 1990 for foreign nationals with the aim of creating both direct and indirect jobs across various sectors in the US. The programme has grown at a blistering pace since then as this turned out to be the shortest way to ‘buy’ green cards with an investment of $500,000 in a new commercial enterprise, which can be repatriated.

Keeping in mind the soaring growth of the scheme, US government is now planning to revamp the scheme. In a letter dated September 8, which was addressed to the Leaders of the US House of Representatives, Senators Charles E. Grassley and Patrick Leahy stated that they oppose a straight reauthorisation of the EB-5 Regional Center Program.

“Indian parents often obtain green cards for their children who are students in the US by gifting them the funds for an EB-5 application. By doing this an Indian student studying in the US is able to find a job after graduation without the need for a sponsoring employer, this gives those students an enormous advantage in a competitive jobs market,” said Mark Davies, Global Chairman, Davies & Associates, LLC.

Compared to the EB-5 visa programme beneficiaries, H1-B visa holders from India have to generally wait for a period of 8-10 years to obtain a green card. Additionally, once issued, a US green card does not expire for any EB-5 investors and their children.

“The amount of $500,000 is already a hard sell because the rate of return in the regional center program is so low. The return on investments is low. Another factor that plays a deterrent is the currency fluctuation. Rupee has failed to recover against the dollar and every drop causes a big increase in the investment for Indians,” said Abhinav Lohia, Partner & Practice Chair, Business and Investor Visa Practice (India & South East Asia), Davies & Associates, LLC.

Prior to 2009, foreign investors used only a small fraction of the 10,000 visas allocated annually to the EB-5 program. In recent years, however, EB-5 demand has increased dramatically, according to a report by US-based private investment firm LCR, which has high networth clients from Latin America, China, India and the Middle East.

But the new format EB-5 investor programme, which might be introduced at a later stage, might not have many takers.

“We believe that the Department of Homeland Security should have more tools at their disposal to vet both projects and investors. We do not, however, support having the EB-5 Regional Center Program expire on September 30,” said Rogelio Caceres, co-founder and CMO, LCR.

Caceres also believes while any increase in the minimum EB-5 investment amount might not be immediately welcomed by HNIs, the benefits of the program far outweigh this increase.