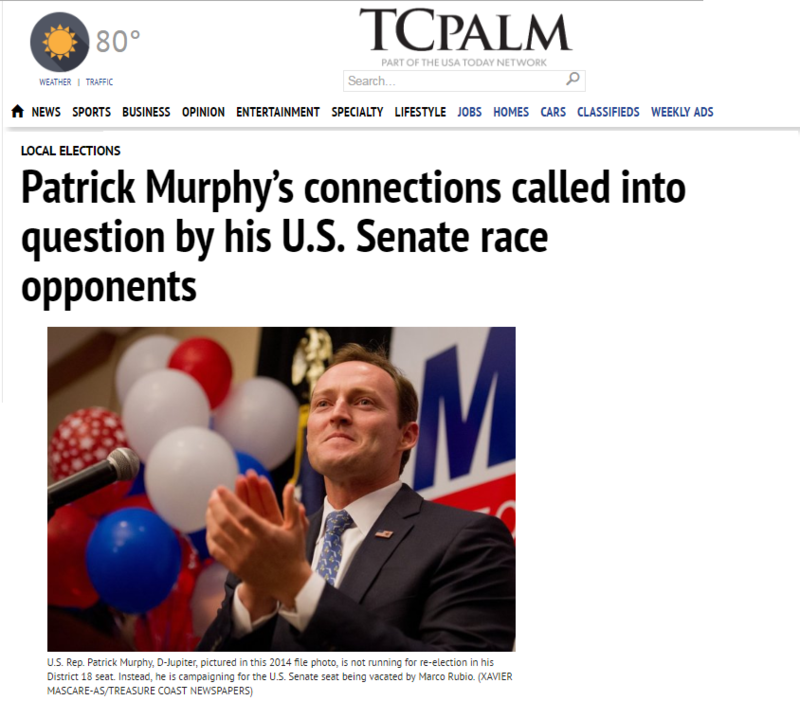 On Sept. 18, 2014, U.S. Rep. Patrick Murphy co-sponsored a bill to expand a controversial foreign investor program. That same day, a developer who's using the program to help fund a project in Miami gave $15,000 to a political committee affiliated with Murphy.

That same project, the highly-anticipated Miami Worldcenter, is being built by Murphy's family construction company.

Murphy's connections to developers who rely on the foreign investor program known as EB-5 have been called into question by his U.S. Senate race opponents, and the Democrat has had to do a lot of explaining lately. Seven developers who used EB-5, their family members and employees have given $309,000 since 2012 to Murphy and political committees that support him, a Treasure Coast Newspapers analysis found. That's more than previously reported by other media outlets.

Murphy's family company, in which he owns stock, was involved at some point in at least two of those donors' projects. Coastal Construction Group no longer is a partner in the SkyRise entertainment tower project in Miami, according to Murphy's campaign, but still is involved in the $1.7 billion construction of Miami Worldcenter - a retail, residential and hospitality project spreading over nearly 30 acres. 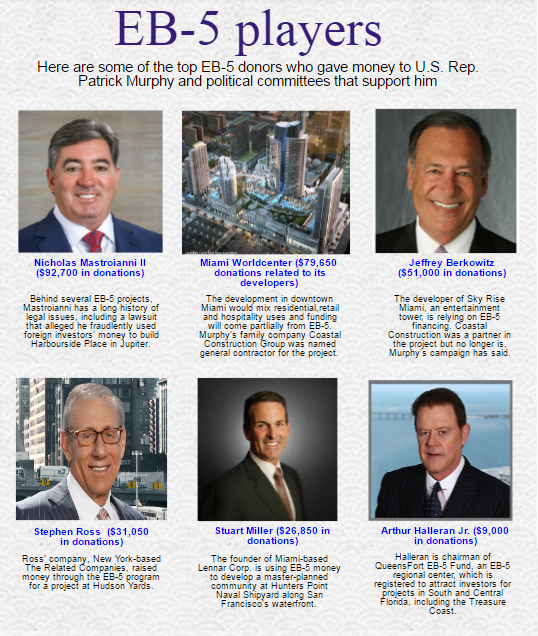 Murphy's opponents accuse him of trying to benefit his family and donors when he signed onto two unsuccessful bills in September 2014 to make the EB-5 program permanent. The program allows foreigners to apply for a green card if they invest at least $500,000 and create at least 10 U.S. jobs, but there have been allegations of fraud and questions over whether it has been the economic driver its creators intended it to be.

GOP incumbent U.S. Sen. Marco Rubio and the other U.S. House member running for his seat, Democrat Alan Grayson, did not receive money from the EB-5 developers who gave to Murphy, federal campaign finance records show.

"Voters deserve to know that Patrick's own company stands to make millions off this program that he's pushed while in office," said Grayson's campaign manager Michael Ceraso.

Murphy's campaign points out the EB-5 program has received broad bipartisan support in Congress and Grayson also was a co-sponsor of one of those extension bills. The immigration reform package Rubio spearheaded, which cleared the Senate but failed to become law in 2013, also would have made EB-5 permanent and the program has received praise from Republican leaders such as Gov. Rick Scott.

"This is an absurd smear from Alan Grayson and Republicans who also support this program," Murphy's campaign spokesman Joshua Karp wrote in an email.

Developers who benefit from EB-5 have given hundreds of thousands to Congress members. Some of the donors who gave to Murphy also gave to other co-sponsors of those two bills. Former U.S. Rep. Joe Garcia, a Miami Democrat who introduced one of the bills, received the most. After leaving office in 2015, he was hired to work for an EB-5 regional center, which connects foreign investors with projects in need of capital in Florida.

Murphy told the Tampa Bay Times in April he didn't know whether his family company had done any EB-5 projects. Yet Coastal Construction's ties to the program and Murphy's ties to developers who benefit from it are inextricable.

Coastal Construction, in partnership with New York-based Tishman Construction, was picked as the Worldcenter's general contractor in February and held a groundbreaking ceremony for the retail, entertainment and housing complex in March.

Two weeks later, a company owned by the brother of Worldcenter developer Nitin Motwani gave $25,000 to a pro-Murphy super PAC. Dev Motwani also hosted a Murphy fundraiser in March 2013, according to the website Political Party Time, which tracks political fundraisers.

One of the directors of that pro-Murphy super PAC, Floridians for a Strong Middle Class, also is a registered lobbyist for SkyRise, whose developer Jeffrey Berkowitz is a Murphy family friend. Also a family friend: Murphy's top EB-5 donor, Nicholas Mastroianni II, a major player in the program and developer of Jupiter's Harbourside Place.

Coastal also served as a lead contractor for the Margaritaville Hollywood Beach Resort, which initially sought EB-5 funding but ultimately relied on other financing.

Murphy's campaign said he has "no management role in Coastal Construction, and hasn't since taking office" and said donations from EB-5 developers had no input on his decision to support the program.

"This program is a bipartisan effort to create jobs in America and it is widely supported by both Democratic and Republican leaders, including President Obama," Karp wrote.