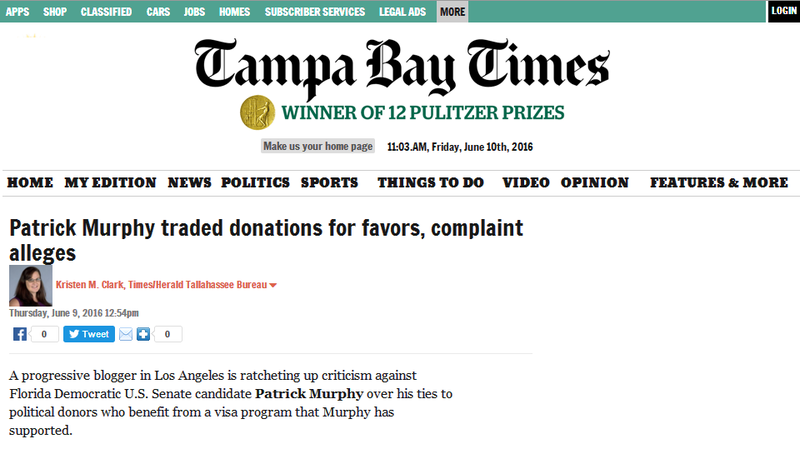 A progressive blogger in Los Angeles is ratcheting up criticism against Florida Democratic U.S. Senate candidate Patrick Murphy over his ties to political donors who benefit from a visa program that Murphy has supported.

Howie Klein, of the partisan "Down With Tyranny" blog, wrote Wednesday that he'd filed identical complaints with the U.S. Department of Justice, the Office of Congressional Ethics and the Federal Elections Commission alleging that Murphy "violated federal law and House (ethics) rules by accepting campaign contributions in exchange for co-sponsoring legislation sought by a contributor."

Klein and contributors to his blog have been routinely critical of Murphy's bid for U.S. Senate and highly supportive of his main primary opponent, fellow U.S. Rep. Alan Grayson, D-Orlando -- whose campaign Klein has encouraged his readers to donate to. (Pam Keith is also running in the Aug. 30 primary against Murphy and Grayson.)

In a statement to the Herald/Times, Murphy campaign spokeswoman Galia Slayen didn't specifically address Klein's accusations but said the complaints were politically motivated.

"This complaint, written by one of Alan Grayson's most prominent fundraisers and supporters, isn't worth the paper it's written on. Congressman Grayson and his allies are just throwing mud at the wall and hoping it will stick," Slayen said, noting Grayson himself remains the subject of a congressional ethics investigation over hedge funds he managed.

At issue in Klein's complaints against Murphy is Murphy's support for the EB-5 visa program -- which fast-tracks foreign investors and their immediate family for green cards when they fund projects that create jobs for U.S. workers.

Murphy two years ago co-sponsored legislation in the U.S. House to permanently extend the program, which has been used in recent years to help finance high-profile South Florida projects that his family's construction company and some of his campaign donors have been involved with.

The 2014 legislation specifically dealt with the "EB-5 Regional Center Program," which one of Murphy's constituents in Florida's 18th Congressional District -- developer Nicholas Mastroianni II -- has worked with.

Klein wrote in his complaint that since 2012, Mastroianni "has funneled more than $100,000 into Patrick Murphy's campaign committee, leadership PAC and super PAC" by way of family members and business entities.

But there is no evidence to support that, even in Klein's complaint.

While a company in Mastroianni's name did donate last September to the super PAC "Floridians for a Strong Middle Class," Klein offers no proof to back up his claim that the donation was connected with foreign nationals. (A North Palm Beach address is associated with the donation from Mastroianni's "230 East 63rd-6 Trust LLC," but the company has been inactive in Florida since 2014. The company is, however, actively registered in Delaware.)

Mastroianni -- who was profiled in Fortune magazine because of his involvement in the EB-5 program -- developed the $150 million Harbourside project in Murphy's home city of Jupiter in Palm Beach County with help from EB-5 financing.

A request for comment sent by email this morning to Nicholas Mastroianni III, Mastroianni's son and vice president of the family's company, Allied Capital & Development -- which built Harbourside, was not immediately returned.

Like Murphy's campaign, Ashley Walker, spokeswoman for "Floridians for A Strong Middle Class," didn't acknowledge the specifics of Klein's accusations. In a statement, she called them "nothing more than a baseless attack from desperate and unethical Alan Grayson and his allies to distract from his own ethics investigation into his potentially illegal, off-shore hedge fund activities.”

Super PACs are prohibited from coordinating with candidate's campaigns.

The legislation to permanently extend the EB-5 program, which Murphy backed in 2014, died in committee, and he has not co-sponsored a similar measure introduced during this session of Congress.

Grayson, as well as conservative political groups, have previously been critical of Murphy's support for the EB-5 program and Mastroianni's donations to the congressman.

The EB-5 visa program has been reauthorized for two decades, with bipartisan support. The permanent extension of it was also included in 2013 immigration reform legislation, which both Murphy and Grayson supported.

This post was updated to clarify the status and location of "230 East 63rd-6 Trust LLC."