HB ON THE SCENE: Optimism More Cautious at Meet the Money Conference 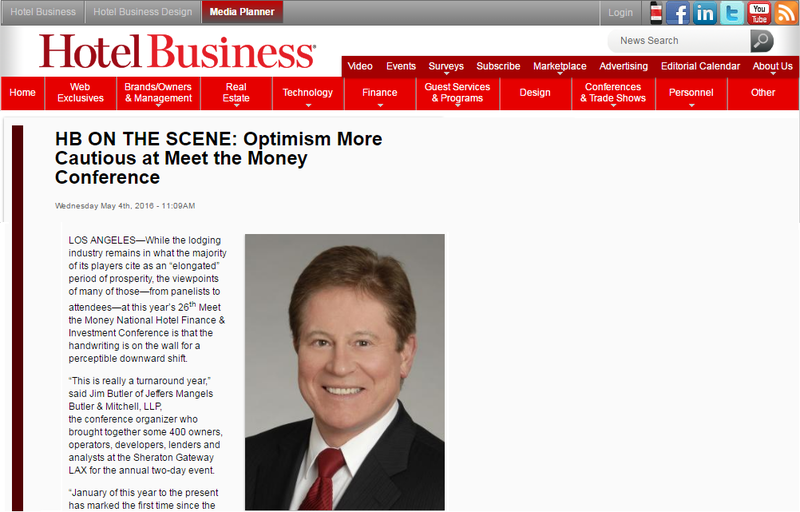 While the lodging industry remains in what the majority of its players cite as an “elongated” period of prosperity, the viewpoints of many of those—from panelists to attendees—at this year’s 26th Meet the Money National Hotel Finance & Investment Conference is that the handwriting is on the wall for a perceptible downward shift.

“This is really a turnaround year,” said Jim Butler of Jeffers Mangels Butler & Mitchell, LLP, the conference organizer who brought together some 400 owners, operators, developers, lenders and analysts at the Sheraton Gateway LAX for the annual two-day event.

“January of this year to the present has marked the first time since the [financial] recovery that people are starting to worry seriously again about a downturn, about financing, about interest rates. It’s gone from ‘All is going very well’ to ‘Boy, there are some things we better focus on,’” Butler said.

All of those concerns and more were part of the conference’s hot topics, which ran the gamut from the state of Chinese investment in the U.S. to the variety of ways to finance a project or transaction to what sort of dance buyers and sellers are beginning to do.

“It is not the same kind of concern we’ve seen in prior downturns and I think that’s optimistic,” Butler told Hotel Business. “I don’t pretend to know where this is going. It is a unique time [where] we need to be patient and watch carefully.”

Whether it will be a bumpy ride or soft landing for the industry when the downturn takes off in earnest remains to be seen; however, Butler noted the industry has been able to enjoy and, perhaps more important, learn from one of the longer recoveries its experienced in the past 20 to 30 years.

“There’s something that relates to this that I actually like hearing. Quite a few of our industry leaders have commented that they think the current situation may be a blessing. Perhaps, things were getting a little frothy last July, August, September and this [anticipating the downturn] has cooled things down. Developers develop when they have money; the only regulator is the availability of capital. So, people stepping back and looking a little harder at everything, whether that’s lending, investing or whatever, may well be a very healthy sign that prevents us from a bubble and a collapse,” Butler said.

For example, on a panel noting “There’s Plenty of Room at the Top,” Virgin Hotels’ CEO Raul Leal said the brand was aiming for 20 to 25 hotels globally, considering within its comp set SLS and W.

“We’re not a Millennial brand; it’s a brand that cuts across all generations,” he said, adding the brand currently was looking to expand into Europe with an undisclosed capital partner as well as into Latin America.

Patrick Hogan, CEO of CMB (California Military Base) Regional Centers, an EB-5 program, detailed some of the advantages of the investment avenue, noting such financing bolstered the recent opening of a Great Wolf Lodge in Garden Grove, CA.

Hogan also cited the now-closed Century Plaza Hotel that’s slated to undergo a reinvention in Los Angeles. “That project’s [approximate] cost is going to be about $1.7 billion. Last year, we raised $450 million for that project and we did it in about seven months, which is an unbelievable record; it about killed my whole staff, but we got it done,” he said.

“I’m pleased that so many people continue saying the window is still open. It may be closing, it may be narrower or more difficult to get through, but it isn’t closed; the ball game isn’t over,” Butler said.