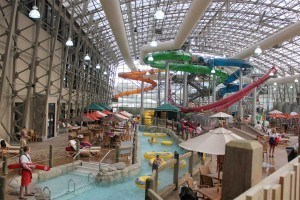 Much of the money for the expansion at Jay Peak has come from the EB-5 program, in which foreign investors are given green cards in exchange for investment capital. Photo courtesy of Jay Peak Resort.

Is the recently expanded and much-ballyhooed Jay Peak Resort in the Northeast Kingdom facing financial difficulties?

Or did a former associate of the resort just get miffed and write a snarky letter that set off inaccurate speculation?

Probably the latter, and not just because Bill Stenger, Jay Peak’s owner, insists that the resort is doing just fine, and is “about 35 percent ahead (of last year) in revenues.”

It’s also because James Candido, the state official who keeps tabs on the resort’s affairs, said he found “no issues” regarding its finances.

And perhaps because Douglas Hulme, who started the discussion of the resort’s situation by announcing that his firm “no longer has confidence in the … financial status of … Jay Peak,” declined several requests over a three-day period to discuss his allegation.

The reason a state official – in this case an economic development specialist in the Department of Economic Development (part of the Agency of Commerce and Community Development) – is keeping tabs on a private business is that most of the money for Jay Peak’s recent expansion has come from foreigners, via what is known as EB-5, a federal investment program run by the United States citizenship and Immigration Services.

Part of Candido’s job is to make sure the various requirements of the law are being followed.

In return for investing at least $500,000, the foreigners get “green cards” for themselves and their immediate families, allowing them to live in the United States. To critics, the program amounts to selling U.S. resident status to the wealthy while the not-so-wealthy are stuck on waiting lists. To advocates, led by Sen. Patrick Leahy, the program provides investments and jobs to capital-short areas such as the Northeast Kingdom.

Both descriptions might be accurate. Either way, what the little flappette about Jay Peak reveals is that, like many financial schemes, the EB-5 program has created its own subculture – a collection of agents, lawyers, financers, consultants, kibitzers (for a fee), and hangers-on, most of whom seem to know one another, at least by reputation, and almost all of them eager to cash in on what appears to be an endless flow of cash from well-heeled folks from all over the world willing to put up big bucks to get themselves and their families into the United States.

One reason Hulme’s angry (and vague) blast at Jay Peak gained some traction after he emailed it to perhaps 100 immigration lawyers was that one of the better-known figures of this subculture, a Florida blogger and financial analyst named Michael Gibson, gave it wider circulation and tried to figure out what had caused the break between Jay Peak and Hulme’s firm, Rapid USA Visa, Inc.

The firm helped make the connections between the resort and potential foreign investors.

“Several analysts,” Gibson wrote, “have speculated that it may be due to … the financial condition of the resort due to the large amounts of capital expenditures and low revenue from the warm winter and low bookings.”

But both Stenger and Candido noted that while the “low bookings” may have seemed reasonable conjecture from Gibson’s New York perspective, Vermont ski resorts are actually having a good year. Unlike some neighboring states, Vermont has stayed cold enough (until now) for snow-making.

Gibson, who did not identify the “analysts,” was reported to be out of the country and unreachable. According to some observers who follow the EB-5 world (but who did not want to speak on the record), Gibson is reliable because his success depends on selling his information, creating an incentive for accuracy. But others, who also did not want to be quoted, pointed out that neither Jay Peak nor Rapid USA Visa had bought his information, perhaps rendering him less likely to be favorably disposed toward them.

The EB-5 program is complex, fast-growing, and therefore open to abuse. In December, the New York Times reported evidence that “suggests that in New York, developers and state officials are stretching the rules … often relying on gerrymandering techniques to create development zones that are supposedly in areas of high unemployment — and thus eligible for special concessions — but actually are in prosperous ones.”

One of those areas, the Times reported, was the site of the Atlantic Yards project in Brooklyn, which includes a proposed new arena for the National Basketball Association’s New Jersey (for now) Nets. In a 2010 story called, “Overselling the American Dream Overseas,” Reuters reported on several misstatements to investors by the developers, including the assertion that New York state’s government was involved in the project.

But even EB-5’s critics acknowledge that the Vermont’s EB-5 projects – there are three others in addition to Jay Peak, and Candido said three more were in the works – follow the regulations and seem to be meeting their goals.

Jay Peak has more than 400 EB-5 investors, Stenger said, and their investments have helped transform the property from a ski lodge into an all-weather, four-season resort with an indoor skating arena, a water slide, and golf courses. Stenger said it was those indoor winter activities – the skating arena and the water slide – that helped the resort prosper despite the snow-sparse winter.

Considering the lack of specifics in the suggestion that Jay Peak is in some financial trouble, the discussion of Hulme’s email is not likely to do the resort any harm. Nor is it likely to weaken support for the EB-5 program from Leahy or its other champions.

But the program, or at least the part of it that applies to Jay Peak, has to be reauthorized before the end of the year, and some of the other revelations of abuses might convince Congress to make some changes in the way it is monitored and regulated.