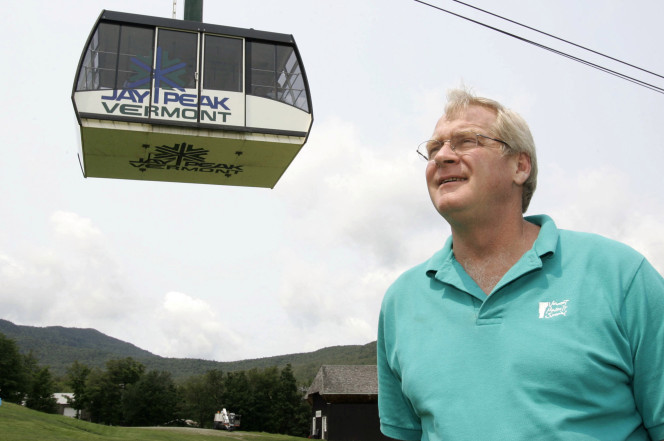 These alleged scammers were out over their skis.

The feds on Thursday charged the developers of a rural Vermont ski resort with a $350 million “Ponzi-like” scheme that fleeced foreign investors through a government immigration program.

The Securities and Exchange Commission said the developers of the Jay Peak ski resort in northern Vermont misappropriated $200 million in funds and siphoned off more than $50 million for personal use.

The resort’s owner, Ariel Quiros, 58, of Miami, and chief executive, William Stenger, 66, of Newport, Vt., bilked hundreds of investors through the government’s EB-5 program, which allows foreigners who invest in US companies to obtain green cards, the SEC alleges.

The money was supposed to fund seven projects, including the resort’s expansion, an indoor water park, an ice rink, hotels, golf courses and a $200 million biotechnology plant, in an economically depressed area just south of the Canadian border.

The SEC said that, “in Ponzi-like fashion,” Quiros and Stenger didn’t tell the investors that the projects were already behind and underfunded, and that more than half of the money raised went to other uses, including paying taxes and investing in an unrelated resort.

Quiros is accused of taking $50 million to pay his income taxes and buy a luxury condominium at Trump Place in Manhattan.

“As alleged in our complaint, the defendants diverted millions of EB-5 investor dollars to their own pockets, leaving little money for construction of the research facility investors were told would be built and thereby putting the investors’ funds and their immigration petitions in jeopardy,” Andrew Ceresney, the SEC’s head of enforcement, said in a statement.

Under a government visa program, foreigners who invest $500,000 or more into economic development projects in depressed areas get green cards and a path to citizenship.

Now, those investors “are in grave danger of losing their investments and having their immigration petitions denied,” according to the complaint.

The SEC said the developers have done little work on the biotech plant — “just site preparation and minimal groundbreaking” — and that it is unlikely to be built.

The SEC appointed Leisure Hotels and Resorts, based in a Kansas City, Kan., to oversee management of the Jay Peak and Q Burke ski resorts.

Operations at Jay Peak are “business as usual,” said JJ Toland, a spokesman for the resort.

Jay Peak, which is in the town of Jay, boasts 78 trails, slopes and glades, as well as “the most snow in eastern North America,” according to its Web site.

Despite Jay Peak’s location in the sleepy far north of the state, its season passes aren’t cheap, costing as much as $1,699 during the winter season for corporate members.