EB-5 is a US governmental program to grant permanent residency to aliens who invest at least $500,000 into job creation in rural areas on American soil or $1 million in larger cities. This controversial yet successful program veritably allows any foreigner to "buy" a green card and thus has been hugely popular with wealthy Chinese.

Thus far, $3.7 billion has streamed into major US cities under EB-5, including $600 million for Manhattan's massive Hudson Yards project, $250 million for the Hunters Point Shipyard in San Francisco and $150 million for the Sahara Hotel and Casino in Las Vegas. American presidential candidate and billionaire Donald Trump has also reportedly used the EB-5 program to successfully raise $50 million from mostly China for a new residential project.

One of the most recent large-scale commercial enterprises under EB-5 is the construction of a new stadium for the Orlando City soccer club in the city of Orlando, Florida. With a 25,500-seat capacity, the new stadium is expected to be completed and put into use by March of 2017 following a $45 million round of EB-5 investment

"The growth of soccer in China and in the United States means more opportunities for these two markets," said Gonzalo Lopez-Jordan, CEO of American Regional Center Group, which focuses on the investment and development of significant real estate projects throughout the state of Florida. "Investors will be able to participate in the ownership of this stadium by partnering with one of the best professional league teams in the United States."

Orlando City SC became a member of the Eastern Conference of Major League Soccer (MLS) in 2013 and signed Brazilian football star Kaká as their first Designated Player following his release from AC Milan.

"Given the ability to participate in one of the most popular and growing professional sports in the United States, we believe that Chinese families looking at sending their kids to the US can utilize this investment opportunity as the best way to bridge the gap," said Lopez-Jordan.

"The Chinese are so interested in EB-5 that the China quota hit its limit in 2014 and 2015," Florida-based immigration attorney Carlos M. Colombo told the Global Times.

Colombo noted that the EB-5 program will most likely increase its $500,000 minimum investment to at least $800,000 in the near future in order to make the program more exclusive. "The law is going to change probably in September. In Canada, a similar foreign investor program was canceled due to the huge number of Chinese applicants," said Colombo. 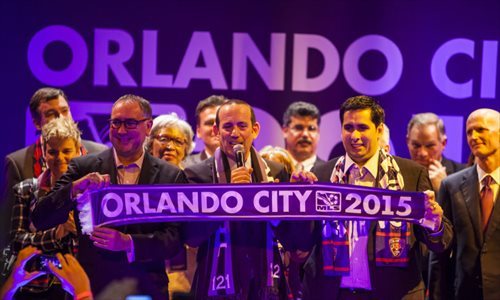 Administered by the US Citizenship and Immigration Services (USCIS), the EB-5 program was created as part of the US Immigration Act of 1990 in order to attract more foreign capital and create more jobs at no US taxpayer cost, but in 2005 a Government Accountability Office report found that foreign investors were not utilizing the program as much as originally anticipated due to a laborious application process, among other factors.

The US Department of Homeland Security recently raised concerns about how quickly EB-5's applicants are approved (often in less than 16 days), which it says could compromise national security and encourage money laundering.

The US Securities and Exchange Commission (SEC) has also had to investigate and prosecute numerous fraudulent investment schemes specifically targeting wealthy Chinese.

One of the most notable recoveries by the SEC involved $158 million that had been bilked from Chinese EB-5 applicants who were led to believe that they were investing in a hotel development center in downtown Chicago. This scheme was conducted by an American in Chicago where Chinese brokers were involved.

"China is the only market that uses EB-5 agents," Colombo told the Global Times. "There is a lot of misinformation and there is a lot of incorrect information being given to EB-5 investors. It's very sad to see, because the largest market should get the best information on EB-5. Like everything, it's a lack of understanding of the system," said Colombo.

I´m interested in EB-5 program, and as I see there are many options to invest in USA.
Could you let me know how to start the process ou I may contact some professional in Brazil?
Thank you
Adriana