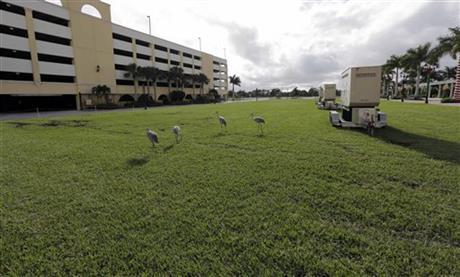 In this photo taken Wednesday, Dec. 9, 2015, shown is a partial view of vacant land set aside to build a new City Center, in Port St. Lucie, Fla. A visa program that gives overseas investors permanent U.S. residency in exchange for a job-creating investment of $500,000 to $1 million apiece has become a target for fraudsters, who bilk wealthy foreigners and leave needy U.S. communities in the lurch. (AP Photo/Alan Diaz)

Port St. Lucie, a disparate series of residential developments and strip malls, had little to boast beyond its proximity to a nuclear plant and its fame as the spring training home of the New York Mets. Then Lily Zhong came to town, plunked down $500,000 for vacant land and promised to finally build a real downtown.

She produced renderings, showing modern, multistory buildings rising along wide, pedestrian-friendly streets, where people would shop, do business, dine out and attend special events, said Gregory Oravec, mayor of the city of 174,000. Home to thousands of retirees, Port St. Lucie sorely needed a gathering spot to bind the community, he said.

"The big idea was to create a sense of place, to put a 'there' there," he said.

But instead of building that downtown, federal authorities say Zhong hoodwinked officials as part of an elaborate scheme to defraud investors using a special visa program that allows wealthy foreigners to become permanent U.S. residents by financing job-creating projects.

Zhong raised at least $8.5 million from Chinese investors through the U.S. EB-5 visa program and improperly used some of it on personal expenses such as luxury cars, a home and a boat, the Securities and Exchange Commission said in a civil complaint against her.

The SEC obtained a federal court order in November freezing Zhong's assets. Through her lawyer, Zhong, who is of Chinese descent and holds New Zealand citizenship, has denied the allegations. She is not charged with any crime.

The case is one of several around the country in which the EB-5 program, which has been around since the early 1990s, was allegedly used to defraud hundreds of investors out of tens of millions of dollars from San Francisco to Chicago by dangling a chance at U.S. residency, according to the SEC.

"It's a legitimate program that, for the most part, has been used legitimately," said Eric Bustillo, director of the SEC's Miami office. "The fraudsters see it as another way for them to find money and exploit it."

Under EB-5, which Congress recently extended through September, foreigners who invest $1 million in a project that will create at least 10 jobs can qualify their family for a two-year "green card" to live in the U.S. Afterward, they can apply for permanent residency. In some areas, such as Port St. Lucie which was hit hard by the housing crisis, foreigners only need to invest $500,000 in qualifying projects.

About 10,000 EB-5 visas are available annually, according to the Homeland Security Department. But the SEC says there is no government agency that guarantees the investment or "green card," and none vets the business proposal.

In one case, the SEC and the Justice Department accused Anshoo Sethi of using false and misleading information to solicit 250 mainly Chinese investors to invest at least $500,000 each for a $145 million project called A Chicago Convention Center. The investors were told, falsely, that major hotel chains backed it and all building permits were obtained, according to court documents.

The investors paid some $11 million in "administrative fees" that were to be refunded. Court documents show, however, that 90 percent of these "fees" were spent by Sethi and his companies, including $2.5 million deposited in his Hong Kong bank account. Sethi pleaded guilty this week to a federal wire fraud charge that carries a maximum 20-year prison sentence.

In another case, the SEC accused Marco and Bebe Ramirez of McAllen, Texas, of fraudulently raising some $5 million from Mexican, Egyptian and Nigerian investors for proposals they were assured would be approved for EB-5. The money was supposed to be held in escrow until the EB-5 approvals came through, but the SEC said it was diverted before that by the Ramirezes into starting a Cajun-themed restaurant and to settle an unrelated lawsuit.

A federal judge ordered the Ramirez assets frozen and appointed a receiver to sort out financial claims. None of their investors got a "green card," court documents show.

Oravec, the Port St. Lucie mayor, said Zhong raised concerns by rarely meeting with town officials and taking no concrete steps to implement her plan. "I've always felt she was fishing," he said.

City Council member Shannon Martin called the incident yet another blow to a project that has struggled to get started for a decade.

"Unfortunately, we are sidelined again," she said at a recent meeting on the issue.

The investors in Zhong's project recently wrote a federal judge begging for help in retrieving their money.

"We had no knowledge of the alleged fraud and embezzlement" the 17 investors wrote.

Zhong attorney David Chase said she supports the appointment of a receiver to handle the finances. In her formal response to the SEC, Zhong said any money she spent on cars, a boat, even education expenses for her daughter, was appropriate. She said she never promised investors they would qualify for the visa.

While the City Center project is in limbo, Oravec said he's hopeful the debacle might eventually lead to the creation of a real downtown.

He gazed out over the grassy, empty lots that sit along busy highway U.S. 1. "We have a lot of work to do for a successful project here."