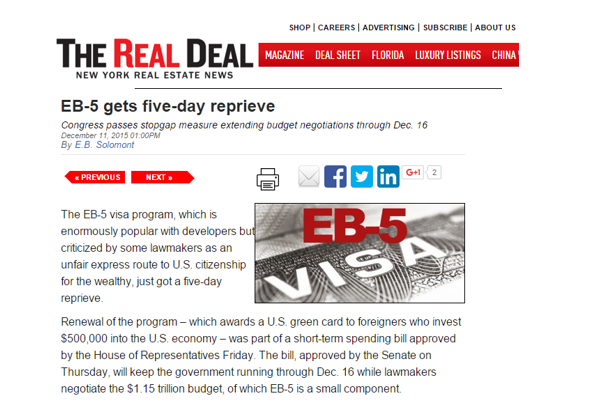 The EB-5 visa program, which is enormously popular with developers but criticized by some lawmakers as an unfair express route to U.S. citizenship for the wealthy, just got a five-day reprieve.

Renewal of the program – which awards a U.S. green card to foreigners who invest $500,000 into the U.S. economy – was part of a short-term spending bill approved by the House of Representatives Friday. The bill, approved by the Senate on Thursday, will keep the government running through Dec. 16 while lawmakers negotiate the $1.15 trillion budget, of which EB-5 is a small component.

The EB-5 program, which offers 10,000 U.S. visas annually and has been dominated by Chinese investors in recent years, was initially up for renewal in September, when lawmakers passed a stopgap measure to keep the government operating through Dec. 11.

In recent months, lawmakers have been considering various changes to the program, such as raising the minimum investment amount. Currently, investors are required to invest $1 million or a discounted amount of $500,000 in “targeted employment areas,” or zones designated as having high unemployment. Other changes could place restrictions on TEA designation.

The EB-5 legislation currently contains 40 pages of changes, according to Ron Klasko, a managing partner at Klasko Immigration Law Partners. For New York developers, proposed changes to TEAs are particularly worrisome since many of them have taken advantage of the discounted investment amount by creating special districts linking their projects to low-income neighborhoods.

“From the point of view of New York developers, almost all of them have, in the past, qualified for the $500,000 reduced investment amount of the TEAs,” Klasko said. “Many of them will not qualify for that under this new law, meaning investors would have to invest $1 million. That’s an issue.” The legislation would also allot a certain number of visas to different investment categories, such as 2,000 visas for projects in rural areas and 2,000 visas for people who invest $1 million.

“There have been long waiting lists for investors in China when they were competing for 10,000 visas,” Klasko said. “Now many of them for the New York projects will be competing for 4,000 visas.” There’s little chance the bill will not pass, he said, since it’s part of the government’s omnibus bill. Meanwhile, developers and investors are sitting tight. “Until we have the final law,” said Klasko, “There won’t be a lot of activity.”