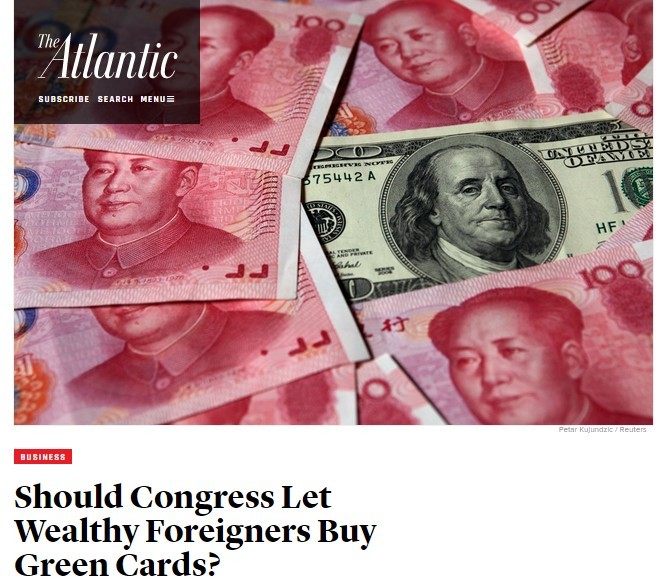 The massive $20 billion Hudson Yards project is one of the nation’s biggest development efforts. When it’s completed on New York’s west side, it will have have 5,000 apartments, six skyscrapers, and pneumatic tubes for trash disposal. And one more feature of the project: It has paved the way for the green cards of about 1,200 Chinese millionaires.

How’s that? Via what’s known as the EB-5 “Immigrant Investor” program, which allows foreigners to get a green card if they invest a certain amount of money to create jobs in the United States. In effect,  rich people can buy American citizenship, and that’s made it controversial in an era of wariness about immigration.

Now, Congress is looking at ways to reform the program, even as parts of it are set to expire September 30.

“There have been some rare but highly publicized failures in the EB-5 program,” said Steve Yale-Loehr, an immigration lawyer at Miller Mayer and a professor of immigration law at Cornell Law School.

Foreign interest in the EB-5 program has grown dramatically in the last few years. Applications were sluggish until the recession, Yale-Loehr said. But then, when domestic financing for construction projects was tough to find, some developers started to look overseas for financing.

There were just 700 visas issued in 2007; in 2014, for the first time ever, the program reached its quota of 10,000 visas through the EB-5 program and had to stop accepting applications. The quota was reached again this year.

For wealthy foreigners, the EB-5 program is the best bet for getting U.S. citizenship. Other options—finding an employer or a family member to sponsor them—have long backlogs and a lot of paperwork. The EB-5, by contrast, is a relative breeze.

“Most of them are doing it because they want the green card and it’s the fastest or best way to get a green card,” Yale-Loehr said.

Chinese investors are the vast majority of the people using the program: Last year, 9,128 of the EB-5 visas were allocated to Chinese nationals, according to State Department statistics. The next biggest number: 225, the number of South Korean nationals who received EB-5 visas. (These figures include investors and their family members, on average, for every investor, two family members have been granted conditional visas, according to the Brookings Institution.)

But with the sudden influx of money from China and elsewhere, the government could not keep up, and regulation lagged behind. Some of the most salacious scandals have concerned swindlers defrauding potential investors, and visas going to people with criminal histories, all beneath regulators’ noses.

One of the biggest problems, experts say, is that investors can put money into projects like Hudson Yards and earn a green card without actually creating very many jobs, at least not directly. That’s largely because of the way the EB-5 program has been changed since its inception.

Congress established the EB-5 program as part of a general immigration overhaul in 1990. At first, the visa was only for direct investors who spent $1 million and created 10 jobs (a separate provision allowed people investing in rural or high-unemployment areas to spend just $500,000). But applications were sluggish, Yale-Loehr said, so in 1992, Congress decided to also allow private entities (such as Related Companies, the developer of the Hudson Yards company) or regions to apply to be “regional centers” which essentially pool foreign investors’ money.

It is these regional centers that have created so much controversy for the EB-5 program. When it changed the law, Congress allowed regional centers to count the number of indirect jobs their project might create, rather than just direct jobs. So rather than a foreign investor saying he was going to open a factory and employ 15 people directly, a foreign investor could say he was investing in a construction project that would create jobs in a restaurant down the street that might serve construction workers. Now, about 95 percent of EB-5 visas are awarded through regional-center programs, rather than through direct jobs.

Most investors pay not $1 million, but instead just $500,000, since they are investing in what is called a “Targeted Employment Area." Congress allowed for TEAs to encourage investors to put money in areas that needed jobs. Just what constitutes a “Targeted Employment Area” is loose and defined by individual states. The designation was meant to spur investors to put money in rural areas and those with high unemployment. But instead, places such as Hudson Yards, which is on the edge of one of the richest neighborhoods in the country, is considered a Targeted Employment Area because the project also counts poorer census tracts, including some in Harlem, in its TEA, Yale-Loehr said. There is a little sense in that—workers might be coming from Harlem, after all—but there is also room for gerrymandering. Changing the definition of TEAs was one of the recommendations of Jeh Johnson, the Secretary of the Department of Homeland Security, in an April letter to Congress. Doing so would “prevent gerrymandering,” he suggested.

Some advocates want the regional-center aspect of the program gone entirely. They’re in luck: That’s one of the provisions that is set to expire September 30, and a group called the More American Jobs Alliance (MAJA) argues that Congress should let it do so.

“There are more than enough direct-job projects in the country to take up the annual quota of EB-5 visas,” MAJA argued in a paid advertisement in The Wall Street Journal.

“The indirect jobs are just not tangible,” Ron Rohde, the group’s secretary-general, told me. By contrast, in direct-job programs, he explained “You have 10 names, 10 Social Security numbers, and that is who is getting the benefit.”

Getting an EB-5 visa might get a little bit harder, though, depending on what Congress decides to do next. Yale-Loehr thinks there’s not enough time for Congress to make major changes to the program before September 30, so he anticipates the regional-center provision will be renewed for a short period of time, say six months or so, while Congress decides how to overhaul the program.

And just how it will be overhauled is a mystery.

An in-depth Brookings Institution report suggests creating a partnership with the Department of Commerce to administer the program, calling the U.S. Citizen and Immigration Services department “ill-suited” to the task. Commerce could more effectively monitor and collect data on the EB-5 program, ensuring that investors are creating the jobs they say they will, the report argues.

Report author Audrey Singer also calls for Congress to tighten rules defining what constitutes a Targeted Employment Area. She also suggests that the EB-5 program could be modified to include a stipulation that some jobs through regional centers go to local residents of a TEA.

“Plenty of money is exchanging hands in the EB-5 program” she wrote, earlier this month. “Let’s ensure some of it is going to the people and places it is intended to aid.”

On the Senate side, this is something that those in charge want to see as well. Senator Chuck Grassley (R-Iowa) and Patrick Leahy (D-Vermont) introduced a bill in June that seeks to get more EB-5 money into rural areas (like their states) by redefining Targeted Employment Areas. The bill would also raise the investment threshold for applicants, requiring people to invest $800,000 for targeted employment areas and $1.2 million for non-targeted employment areas. It also would make it easier for the government to monitor fraud and track regional centers’ progress.

A House bill proposes making the program permanent, increasing fraud abuse, and changing the way applications are counted so that family members don’t count towards the annual cap. It would require less reform than the Senate bill would.

A third bill, introduced more recently, includes some of both proposals, but is still relatively light on reforms.

And then of course there is another option: Doing nothing, which wouldn’t be too surprising during this Congressional term. Doing nothing, of course, is just what some advocates want. Doing nothing would eliminate the regional centers program and likely slow the visa-application process. What no one knows, yet, is whether that would slow the economy, too.