Reform on the horizon for the popular EB-5 Program 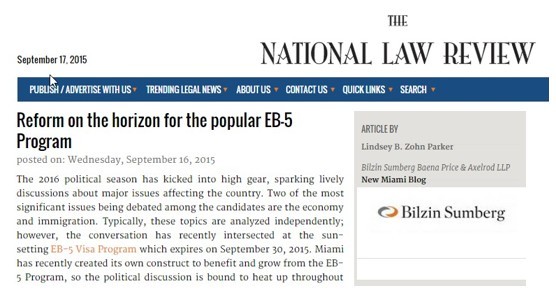 The 2016 political season has kicked into high gear, sparking lively discussions about major issues affecting the country. Two of the most significant issues being debated among the candidates are the economy and immigration. Typically, these topics are analyzed independently; however, the conversation has recently intersected at the sun-setting EB-5 Visa Program which expires on September 30, 2015. Miami has recently created its own construct to benefit and grow from the EB-5 Program, so the political discussion is bound to heat up throughout this already hot month as Congress considers reforming this market for capital investment.

The EB-5 Visa Program, also known as the Immigrant Investor Program, is administered by U.S. Citizenship and Immigration Services – part of the Department of Homeland Security – and was established in 1990 to grant permanent residency to a foreign investor and their immediate family members who funds at least $500,000 to $1 million of the construction cost for a project that creates at least 10 domestic jobs. The smaller level of investment at the $500,000 threshold is permitted when the investment is specific for a “Targeted Employment Area,” meaning a rural area or an area that has experienced high unemployment of at least 150% of the national average.

The demand for the 10,000 visas allocated annually for this benefit has skyrocketed in recent years after the Department of Homeland Security clarified a rule to allow temporary construction jobs to count toward the job-creation tally. This allowed real-estate developers to take advantage of the program and created an avenue for more significant foreign investment. So far, Chinese citizens are the largest recipient of EB-5 Visas, accounting for 85 percent of the EB-5 Visas issued in fiscal year 2014 .

The City of Miami has started to utilize the EB-5 Visa Program in significant ways within the past year; being one of a group of cities to launch its own “EB-5 Regional Center,” to help finance projects that would benefit the local community. Some have criticized the EB-5 Program “as a way for foreigners to buy a spot in line ahead of those who wait years for green cards,” however, Miami Mayor Tomas Regalado is looking at it differently – advocating for this type of investment as a means to provide affordable housing for teachers, police officers, young professionals, senior citizens and others left on the outside of the City’s luxury housing boom. Speaking before a group of developers and attorneys gathered last week to discuss the EB-5 Miami Regional Center, the Mayor emphasized that “affordable housing is the No. 1 issue residents contact his office about. More than 52,000 people in Miami-Dade County are on the waiting list for publicly-funded affordable housing,” and he believes this type of investment provides a unique opportunity to address the problem.

Notably, the first project granted funding by the Miami Regional Program is not affordable housing, but Tibor Hollo’s Panorama Tower, which helped set up Miami’s Regional Center.  Jeff Berkowitz’s Skyrise Miami Tower has also been granted EB-5 status along with the Hotel Astor which gained EB-5 status just this month after a long two year application process, giving permanent US residency to 18 investors from Brazil, China and Venezuela who together funded $9 million of the Art Deco hotel’s renovations .

Despite its popularity with cities and developers, EB-5 reform is imminent in Congress due to its pending expiration. Proposed legislative options being presented include “rais[ing] the minimum foreign investment in a project located in a targeted area that has high unemployment from $500,000 to $800,000 and from $800,000 to $1.2 million for projects located in areas that are not designated as having a high unemployment rate. In addition, the proposed legislation would also reduce the percentage of indirect jobs created that can be counted toward the job creation total.” Many feel the proposed legislation outlining these reforms are complicated and confusing, creating unnecessary roadblocks.  It’s unclear if the intent is to make it more difficult to “buy” residency in the age of relevant discussions occurring around the country on immigration reform.

As we see, the EB-5 Visa Program and its implementation are not without their controversies, but when such investments can be used at the community level to serve a critical need, it’s a discussion worth having.