EB-5 investor dollars are fueling development in SoCal, but the program is vulnerable to fraud

Patriotic images and posters of Hillary Clinton in the storefront of an EB-5 investment firm in San Gabriel.

Foreign investment dollars are transforming parts of the San Gabriel Valley. Drive down parts of Valley Boulevard and one sees new hotels, grocery stores, mini-malls, restaurants, many of them catering to a Chinese immigrant clientele.

There's something else peppering stretches of Valley: Banners on construction projects and plastic signs on storefront offices that read "EB-5."

The EB-5 is an immigrant visa for foreign investors. Those who invest a minimum of $500,000 in a U.S. business and create 10 jobs may apply for conditional legal status; if the business project they invest in succeeds, they and their families can get on a path to U.S. citizenship.

In the last few years, immigrant investors have poured money into Southern California. Much of it has come from China. At the same time, the program has drawn its share of controversy.

A recent government audit concluded that federal officials lack the bandwidth to prevent fraud within the program, which has become more common.

The investor visa program began in 1990, but its popularity really began to rise as the U.S. economy sank in the late 2000s.

"Traditional financing was hard to come by, and a lot of investors and business people were looking for other ways to fund their projects," said Audrey Singer, a senior fellow with the Brookings Institute. "So the EB-5 became a lot more popular during and after the recession."

Around the same time, China’s economy took off. So did the number of EB-5s  issued, from a few hundred a year in the mid-2000s to 10,000 visas last year, the maximum allowed. 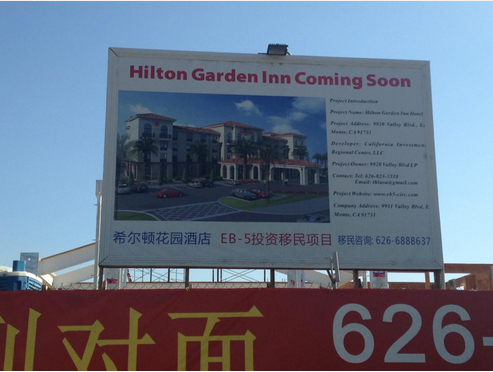 Here’s how it works: Immigrant investors work with what's called an EB-5 “regional center.” Most of these are private businesses - like developers, for example. Their projects are vetted by the federal government. These firms collect investments, and help move along visa applications.

Investors may commit either $1 million or $500,000, provided they are investing in what's called a "Targeted Employment Area," or TEA.

That might explain why EB-5 money often goes into working-class neighborhoods like El Monte. The city has experienced both the upside and the downside of the program.

Dave Gondek, an attorney for El Monte, pointed out a construction site in town one recent afternoon, the site of a soon-to-be hotel. Its fence was festooned with a giant banner in Mandarin reading "EB-5." .

“Man, 20 years ago, this was a pretty bleak looking place," he said, driving past the site on Valley Boulevard.

There are more businesses on the street now. Gondek says foreign investment has helped boost the city's fortunes. But El Monte also paid a steep price a few years ago, when plans for a sprawling retail and housing development went south.

The city was working with a EB-5 regional center to build the project. But in 2009, the developers were arrested on suspicion of fraud. They weren't prosecuted. But the city pulled out of the deal - and the developers sued.

Gondek says it’s cost the city millions in legal fees. The site is finally being developed into housing, by a different company. But he wonders if the fiasco might have scared off other potential investors.

"Apart from the financial loss that the city itself sustained, I think the loss to the community was that the confidence of investors, immigrant investors, may have been shaken," Gondek said. "Reputational damage, that hurts. That hurts when you’re trying to attract capital investment.”

In a working-class city like El Monte, it’s not easy to get banks to fund projects, Gondek said. That makes EB-5 money hard to resist, in spite of the risk that a project will go bad.

"Everyone is interested in capital, and capital is scarce," he said. "Certainly in an underserved community like ours, where traditional financial institutions aren't making loans." 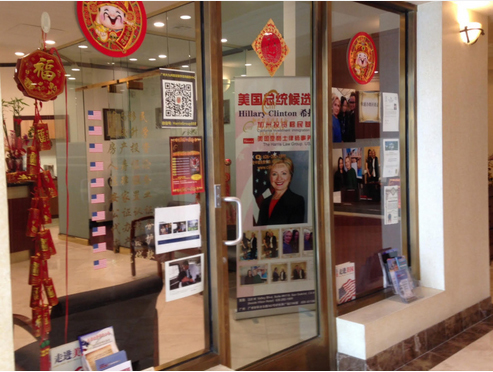 Still, he described the EB-5 environment as "kind of like the Wild West, a little bit."

Critics of the EB-5 program say there’s not enough oversight. In 2007, there were fewer than 20 "regional centers" in the U.S. Now there are almost 700.

Thirty-four regional centers have been terminated by the federal government. A audit released last week by the U.S. Government Accountability Office noted 59 open investigations tied to the EB-5 program; the audit concluded that the government lacks the tools to prevent fraud within the program, or to properly monitor job creation and other economic benefits.

But this hasn't stopped the EB-5 boom. It's tangible in the city of San Gabriel, where Valley Boulevard is packed with new construction and businesses catering to Chinese immigrants. A sign on a vacant lot advertises yet another hotel on the way.

"Since the EB-5 became effective, there was a big influx of money or investments into this area, especially from mainland China," said Long Liu, an attorney whose office sits in the midst of the development. “I would say at least half the businesses or big real estate projects were funded by foreign funds.”

On one block, near his office, it’s hard not to spot an EB-5-related business. Liu points to a storefront on the ground floor of a hotel. A poster in the window reads “EB-5.”

“That is actually an investment company that caters to foreign investors," he said.

Not far away sits a law firm that advertises EB-5 services. Then Liu pointed to a vacant space next door. It used to house the local office of a company called Luca International, LLC.

Federal investigators allege that Luca's principals defrauded investors, including EB-5 investors and local Chinese Americans; a complaint filed by the Securities and Exchange Commission alleges that money collected for oil exploration instead went toward company executives' personal expenses. Liu is representing investors, who are suing.

The Luca scandal has rattled the EB-5 industry. Howard Ting is vice-president of YK America, a long-established regional center in El Monte that builds retail projects. Ting worries about bad actors as the field has become crowded.

“They are ruining…our reputation, doing this," Ting said. "People are thinking, you guys just want to take our money, take the money and run and don’t do (any) jobs.”

EB-5 investors have much more to lose than money, Ting said. If a project fails, they lose their path to U.S. citizenship.

"You not only collect the $500,000 that go into your project," he said. "You are liable for the investors. For their future, their family, their kids.”

The problems have caught the attention of lawmakers; a Senate bill proposes tightening numerous loopholes, including the gerrymandering of "Targeted Employment Areas" so that investors can pay the minimum.

The EB-5 program comes up for reauthorization in Congress next month.