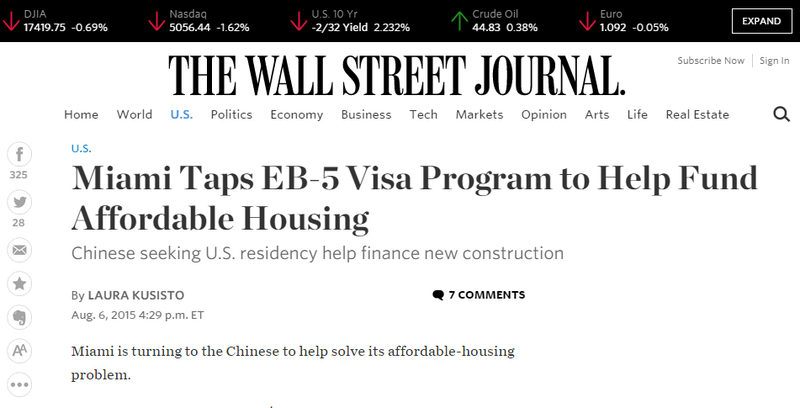 Miami is turning to the Chinese to help solve its affordable-housing problem.

Last week, Miami Mayor Tomás Regalado called on housing developers to build more apartments targeted to teachers, police officers, young professionals and senior citizens—groups that have been on the sidelines during the city’s luxury-housing boom.

The twist: The city will arrange for selected developments to be partially funded by a federal visa program known as EB-5, which grants green cards to foreigners who invest at least $500,000 in businesses or construction projects that create American jobs. The overwhelming majority of EB-5 investors are individuals from China eager to obtain U.S. residency.

Congress created the EB-5 program in 1990, but it was barely used until six years ago, when the agency overseeing the program, the Department of Homeland Security, clarified a rule to allow temporary construction jobs to count toward the job-creation tally. That made it easier for real-estate developers to get in on the program.

Nearly 11,000 foreigners applied to participate in the program in the fiscal year ended Sept. 30, up from 6,346 a year earlier and 486 in 2006, according to U.S. Citizenship and Immigration Services, a division of Homeland Security that administers the program.

Businesses seeking EB-5 funds typically contact middlemen—often lawyers—who run what are known as regional centers, which work with brokers in China and other countries to recruit investors, pool their investing dollars and funnel the money, often in the form of low-cost financing, to the businesses. The regional centers are paid a fee based on the amount of money they raise.

In the past year, Miami and a few other governments decided to create their own EB-5 regional centers, which allows them to select projects to help finance what would benefit the local community, charge a lower fee to the businesses and, in some cases, use the fees to supplement services such as police and firefighters.

“More cities are looking into these opportunities, particularly as other incentives or other benefits start becoming more difficult” to offer given tightening government budgets, said Rogelio Carrasquillo, an attorney at Akerman LLP, who helped Puerto Rico set up its center.

The EB-5 program has been criticized by some as a way for foreigners to buy a spot in line ahead of those who wait years for green cards. Some experts also say it is difficult to evaluate whether projects meet their job-creation targets.

Nor are the programs a slam-dunk for potential immigrants. Investing in the sorts of economic-development projects and affordable-housing developments that government centers are pushing may be risky because investors don’t get permanent green cards unless the project creates jobs within two years, said Michael Gibson, managing director at USAdvisors.org, an investment-advisory firm that specializes in EB-5. 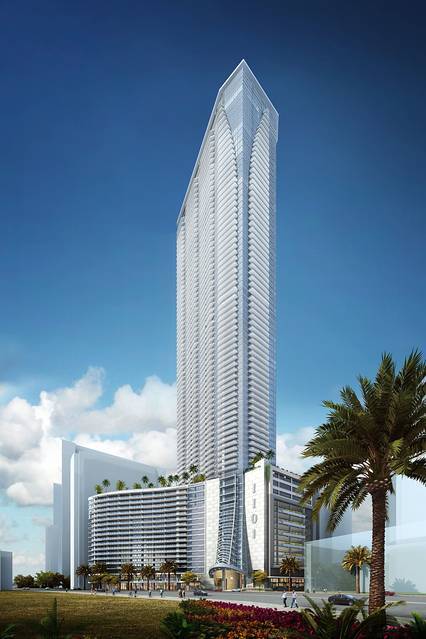 A rendering of Miami’s Panorama Tower, the first project being funded with help from the city’s new EB-5 regional center.

“Bigger is not better in EB-5. Bigger and more complicated is worse,” he said.

Miami officials said they decided to start a regional center mainly to tackle its lack of affordable housing. According to an analysis prepared for The Wall Street Journal by the University of Florida’s Shimberg Center for Housing Studies, Miami-Dade County lost nearly 21,000 affordable apartments—or those that low- or medium-income people can rent without spending more than 40% of their income each month—from 2000 to 2012. In most cases, the buildings were torn down or converted to attract residents with higher incomes.

Over the same period, developers built 88,000 condominiums, many of which were in the luxury category. “You have major developers doing gorgeous condo towers, but they really are above and beyond what somebody can afford in certain segments of our community,” said Mikki Canton, managing director of the City of Miami Regional Center.

Ms. Canton said it has been difficult for developers of moderate-income housing to compete with luxury developers for land and for financing. At the same time, federal funding for affordable housing has been reduced. In addition to conventional sources of funding a project, using EB-5 funds, which carry considerably lower interest rates than conventional bank loans, might help level the playing field, she said.

The first project being funded via the Miami regional center won’t be in the affordable category, however. That development, the Panorama Tower, is an 83-story luxury tower with apartments, hotels, retail, medical facilities, educational space and international consulates. Ms. Canton says the Panorama Tower helped pay the costs of setting up the regional center, but she expects many of the future projects to be in the affordable category.

Following the mayor’s call last week, a veterans group and wealthy businesspeople have emerged with a plan to build a complex for U.S. veterans that will include a hotel, housing and medical facilities near the University of Miami Hospital. They have approached the Miami regional center about using some EB-5 financing.