A publicly traded company has acquired a company that manufactures power tools in Vergennes and Winooski.

Generac Holdings Inc., based in Wisconsin, is traded on the New York Stock Exchange as $GNRC, has a market capitalization around $2.43 billion, and owns the brand Generac Power Systems.

The local management team will continue running Country Home Products, which has updated its logo to say “a subsidiary of Generac Power Systems.” The companies didn’t detail what might change for company workers.

Country Home Products employs about 250 people at three locations throughout Vermont. The company was once considered a “troubled company” under a federal immigrant investment program, but has also been named one of the 27 best places to work in Vermont.

“This is a very exciting transaction for Country Home Products,” Joe Perrotto, president of Country Home Products, said in a news release. “(The deal) will open up even larger markets for sales of DR, Neuton, and Generac products both in the U.S. and globally, and will also create meaningful opportunities to improve our product costs and ultimately the value we bring to our customers.”

Aaron Jagdfeld, president and chief executive officer of Generac Holdings, said in the release that the deal “should create meaningful cross-selling opportunities” and “generate certain cost synergies as we leverage our existing global sourcing and manufacturing capabilities.”

In 2012, Gov. Peter Shumlin and U.S. Sen. Patrick Leahy announced that Country Home Products would receive EB-5 investment funding. Leahy said at the time, “One day this investment could even add more jobs. All at a cost of zero to the taxpayer.” 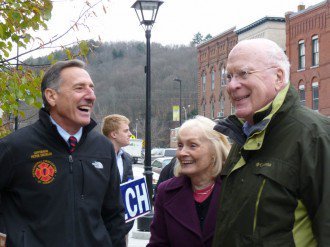 Country Home Products was then considered a “troubled company.” Foreign nationals were able to invest $500,000 each in exchange for a provisional green card. If the investment helped keep a portion of the company’s 200 jobs in the state after a two-year period, investors were eligible to have the restrictions removed from their residency permit.

Vermont’s Agency of Commerce and Community Development manages a regional center for the federal EB-5 program, but the agency does not say how much companies receive from investors. Seven Days pegged the amount at $11 million in 2012.

Patricia Moulton, secretary of the Agency of Commerce and Community Development, called Country Home Products “a success story.” Moulton said she has no reason to believe that jobs at the company have been reduced or that investors did not receive their green cards.

The companies did not say how much money EB-5 investors received or will receive as part of the acquisition. Spokespeople for Generac Holdings did not return inquiries for comment placed Tuesday.

“They are a success story in a lot of respects, not just EB-5,” Moulton said of Country Home Products. “Local folks started these inventions. They’ve grown pretty steadily. They’ve achieved a lot of their growth right here in Vermont.

“I know we always get a little nervous when Vermont companies are acquired, but it also means the company is doing something right,” she said. “They’re certainly not a troubled company anymore.”