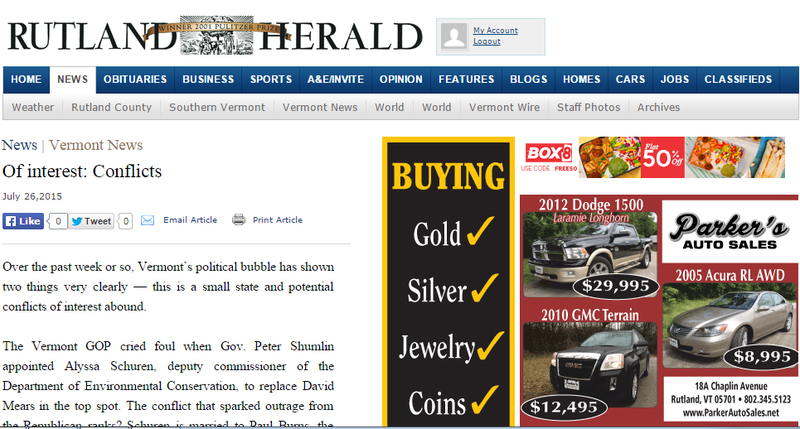 Over the past week or so, Vermont’s political bubble has shown two things very clearly — this is a small state and potential conflicts of interest abound.

The Vermont GOP cried foul when Gov. Peter Shumlin appointed Alyssa Schuren, deputy commissioner of the Department of Environmental Conservation, to replace David Mears in the top spot. The conflict that sparked outrage from the Republican ranks? Schuren is married to Paul Burns, the executive director of the Vermont Public Interest Research Group. Burns’ organization frequently advocates and lobbies the DEC on environmental issues.

Democrats were quick to respond. They called the GOP charges “sexist,” leveled simply because Schuren is a woman. And they pointed to stories by the Vermont Press Bureau and VTDigger that highlighted Republican Lt. Gov. Phil Scott’s construction company netting about $3.8 million in state contracts since he was first elected to the Senate in 2001.

Soon after it was revealed in a Burlington Free Press article that Brent Raymond, director of the Vermont EB-5 Regional Center, left his job for one at Mount Snow. His new position involves working on an EB-5 project Mount Snow has undertaken. The regulator becomes the regulated.

It was Shumlin’s turn to cry foul, saying he had asked state officials to review the circumstances around Raymond’s departure. He was then seemingly moved by the ordeal to support an independent ethics panel in Vermont. His spokesman revealed that support to Dave Gram of The Associated Press.

At first glance it would appear that Vermont is devolving into some immoral abyss.

Each of the situations above represent potential conflicts of interest. But none of them, on their own without mitigating factors, can really be considered so. Potential conflicts can be managed. And in a small state like Vermont, personal and business relationships between individuals in the public and private sectors are bound to creep up.

Still, it seems entirely appropriate to have an independent panel in place to help with oversight, and perhaps discourage any ethical lapses that could occur. Perhaps some of those heel-dragging lawmakers who have stood in the way will finally take a cue from Secretary of State Jim Condos, the advocacy group Campaign for Vermont, and now Shumlin, and act. The public deserves it.