By promoting her, GOP chairman David Sunderland wrote, Shumlin "knowingly created an unacceptable potential for the abuse of the regulatory authority of the department" — among other travesties.

Why's that? Because Schuren, who has served as deputy commissioner since April 2013, happens to be married to Paul Burns, executive director of the Vermont Public Interest Research Group — and VPIRG lobbies heavily on environmental issues.

"For a party that consistently shows disrespect towards women, it's disappointing but not all that surprising that they are defining Alyssa by the job her husband has," spokesman Scott Coriell said in a written statement.

Even the boss jumped into the mud.

"I think it's more than coincidence that every time the Republican Party raises conflict-of-interest issues in my administration, it always seems to be the women they're asking the questions about," Shumlin told WDEV's Mark Johnson on Monday.

Yes, it would be utterly sexist for the GOP — or anyone, for that matter — to suggest that Schuren's appointment had anything to do with her husband's job. It would also be wrong. Given that she's currently the deputy commissioner, it's hard to imagine anyone more qualified than Schuren.

But it's perfectly reasonable to ask how, exactly, Schuren and Burns will manage what is quite clearly a conflict. After all, Burns is one of the most influential lobbyists in the Statehouse, and his organization does, in fact, interact with the DEC on such issues as the Vermont Gas pipeline, the bottle bill, toxic chemical regulation and renewable energy. (Schuren declined an interview request, saying she was on vacation, while Burns did not respond.)

Shuren's is not exactly a new conflict, points out her boss, Agency of Natural Resources Secretary Deb Markowitz. Since she's worked at the department, Markowitz says, the deputy commish has recused herself from all matters in which VPIRG is directly involved.

"It won't interrupt her ability to get her job done," Markowitz says.

Outgoing Commissioner David Mears agrees. He praises his replacement as "absolutely terrific" and notes that, in a small state, everyone has conflicts. Mears has recused himself in several matters he previously litigated, he noted, and once had to do so unexpectedly when he learned his sister-in-law's husband represented another party.

"I just think it's the nature of being a public official in the state of Vermont: It's just inevitable that conflicts will arise," he says.

Neither Markowitz nor Mears would address their boss' charge of Republican sexism.

"I'll leave it to higher-paid people than me to reflect on what the broader societal implications of this are," Mears says.

Good on them. Shumlin's cheap political hit diminishes an important debate we should be having in this state, because — guess what — conflicts arise all the time! In the past week alone, at least four situations have merited some discussion.

Late last week, the Vermont Press Bureau's Neal Goswami and VTDigger.org's Morgan True both wrote about the nearly $3.8 million in state contracts Lt. Gov. Phil Scott's company, DuBois Construction, has received since Scott was first elected to the Senate in 2000. It's not exactly breaking news, but it absolutely deserves further scrutiny if Scott runs for governor, as the LG himself conceded.

On Tuesday, the Permanent Fund for Vermont's Children announced it had hired Shumlin's deputy chief of staff, Alyson Richards, as CEO. As the governor's education policy adviser, Richards has worked closely with the nonprofit on early childhood education issues.

Richards apparently addressed the conflict head-on. She penned a memo in April to Shumlin's outgoing and incoming chiefs of staff formally informing them she would take the job. Richards wrote that she would "remove myself from any Governor's Office decisions that might provide any material benefit to the Permanent Fund."

Perhaps most troublingly, the Burlington Free Press' Dan D'Ambrosio reported Tuesday that the Shumlin administration official in charge of the Vermont EB5 Regional Center, Brent Raymond, is leaving to work for a company overseen by his office: Mount Snow. The resort is trying to raise more than $50 million for infrastructure projects through the federal EB5 program, which provides green cards to those who invest more than $500,000 in designated projects.

Just last month, Raymond traveled overseas with the company to help market the projects, according to his soon-to-be-former boss, Secretary of Commerce Pat Moulton. 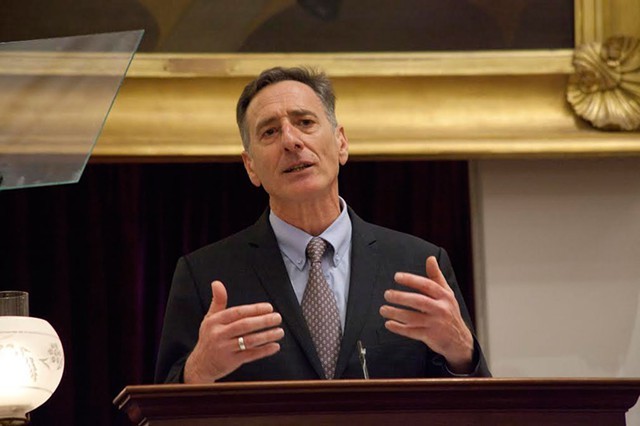 "We do not know when employment discussions started," Moulton says, adding that Raymond was "asked to cease all work for the agency" three days after he informed her of his plans. Raymond did not respond to a request for comment.

Shumlin was none too pleased.

"The governor has concerns about the potential for a conflict of interest in this decision," Coriell says. (Speaking of conflicts, Raymond, Coriell and I all used to work together in Congressman Peter Welch's office. Told you this state was small.)

Coriell adds, "The governor has also asked [the Agency of Commerce & Community Development] to review the communications leading up to this departure to ensure that all actions were in compliance with the Executive Code of Ethics and conflict of interest policies."

Huh. So Raymond's departure is a conflict worth investigating, but Schuren's appointment doesn't merit discussion?

Here's a thought: Perhaps the reason the Vermont GOP raised concerns is not because they're a bunch of sexists, but because the Shumlin administration has a history of cozy relations with its private-sector and nonprofit supporters — VPIRG included.

All four companies have given plenty to Shumlin's campaigns — either directly or through their executives — and have benefited from official action. So has Mount Snow, which has donated $4,000 to the gov over the years.

Isn't that just as much of a conflict as Raymond's trip through the revolving door?

"The governor is pleased to adhere to Vermont's campaign finance laws," Coriell says. "Similarly, we expect all appointees to follow the Executive Code of Ethics."