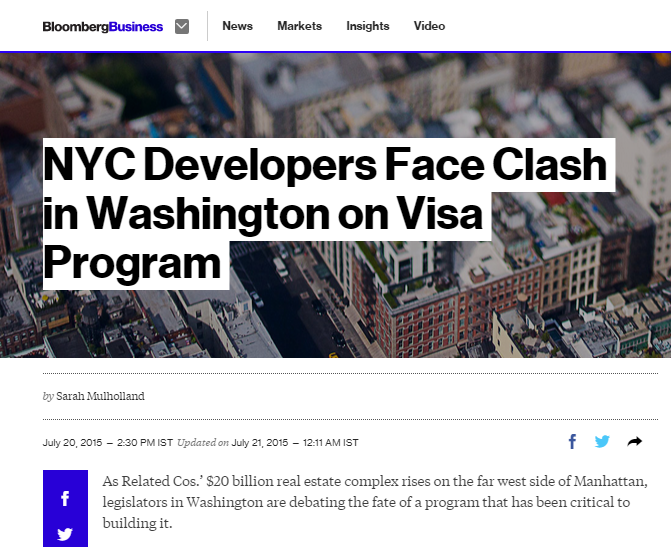 As Related Cos.’ $20 billion real estate complex rises on the far west side of Manhattan, legislators in Washington are debating the fate of a program that has been critical to building it.

The caissons underpinning the 28-acre (11-hectare) Hudson Yards project, and steel beams rising for towers from Seattle to Los Angeles, are resting on the same foundation: a bedrock of cash from Chinese individuals. Developers are taking advantage of a record amount of money that’s flowing through the EB-5 program, which grants green cards to foreigners that invest a minimum of $500,000 in projects that create jobs.

Lawmakers are pressing for changes to EB-5 when it comes up for renewal by Congress in September. Proposed legislation seeks to redirect investments to poor and rural communities and would make it tougher for developers to access funds in big cities such as New York, where at least $3.2 billion of EB-5 cash has gone toward building the skyline since 2010, according to a study by Jeanne Calderon and Gary Friedland, professors at New York University’s Stern School of Business.

“It wouldn’t be the death knell, but it would change everything dramatically,” said Dan Dwyer, a New York-based lawyer with Dai & Associates who specializes in EB-5 financing.

The bill, S. 1501, sponsored by senators Patrick Leahy, a Vermont Democrat, and Chuck Grassley, a Republican from Iowa, aims to ensure that the poorer areas that were the intended beneficiaries when the program began in 1993 are being adequately served. The measure also proposes stricter oversight to guard against fraud, and raising the minimum investment to $800,000.

Real estate companies latched on to EB-5 funds in 2009 when other sources of capital dried up during the financial crisis, and changes in the way jobs were counted made it easier for construction sites to qualify. That set off a boom, with the number of EB-5 centers in the U.S. ballooning to 689 from 16 in 2007, according to U.S. Citizenship and Immigration Services.

Detractors say the program makes it too easy for wealthy foreigners to buy citizenship while not doing enough to aid financially strapped communities. The bill before Congress would restrict the use of EB-5 funds in thriving metropolitan neighborhoods by reining in gerrymandering used to create impoverished zones.

“This creates an opportunity for rural representatives to step out and say, ‘We always intended this for rural development. How do we push this money back to rural areas?’” Dwyer said.

At Hudson Yards, billed by Stephen Ross’s Related as the largest private real estate development in U.S. history, about $600 million has been raised through EB-5. The company is embarking on a second round of fundraising, according to Joanna Rose, Related’s spokeswoman. She declined to comment on proposed changes to the program.

Using EB-5 allows projects to proceed at a pace they otherwise wouldn’t be able to, Related Chief Executive Officer Jeff Blau said in April during a forum on Chinese investment.

Related and Larry Silverstein, the real estate mogul behind the rebirth of the World Trade Center, are among large developers that have formed their own groups to connect directly with potential EB-5 investors, speeding up the process.

The program is also popular with states and municipalities that have benefited from its success. From 2011 to 2014, at least 103,000 jobs were created across 25 states and territories, according to a report this month by the EB-5 Investment Coalition, a business group working to reauthorize EB-5.

Cash from EB-5 investors is funding real estate projects as diverse as a Marriott hotel in Los Angeles and a skyscraper in Seattle. In New York, the program is helping finance construction in some of the city’s most exclusive neighborhoods.

Developer Michael Shvo is raising money from Chinese investors through EB-5 for 125 Greenwich St., what he says will be the tallest residential tower in Manhattan’s financial district. He also plans to seek EB-5 funds for a proposed condominium project at 100 Varick St. in Soho.

“EB-5 has allowed developers to reach an even broader spectrum of investors,” Shvo said in an e-mail. That’s especially helpful when traditional construction-lending contracts, he said. “We look to it only in scenarios where timing, program requirements and cost make sense.”

Virtually every development using EB-5 funds today finds a way to qualify for a lower investment hurdle by being designated a targeted employment area, or TEA, according to NYU’s Friedland. Currently, investors need only invest $500,000 in a project that falls within a TEA, compared with $1 million for other projects.

To be counted as a TEA, a district has to have a jobless rate that’s at least 150 percent of the national average, or be in a rural area. In New York and other large cities, multiple census tracts are stitched together to create zones of high unemployment, enabling areas like Manhattan’s far west side to qualify. States decide what constitutes a TEA.

“It’s a highly politicized process,” Friedland said. “The states obviously aim to retain and attract investors and development to their state and not lose it to another.”

Some lawmakers with large urban constituencies, including Senator Charles Schumer, a New York Democrat, are pushing to keep the definition flexible, according to a Democratic aide, who asked not to be named because talks are ongoing.

It’s critical that TEAs “be defined to maximize the ability of the EB-5 program to continue to spur economic growth and fulfill its fundamental purpose, which is creating jobs,” Jeff Campion, a member of the EB-5 Investment Coalition’s steering committee, said in an e-mailed statement. Related, Silverstein Properties Inc., Hilton Worldwide Holdings Inc. and Marriott International Inc. are among the group’s members.

Allowing dollars to flow to where they will earn the greatest returns is key to attracting investors to the program, according to Steve McMillin, a partner at U.S. Policy Metrics, a Washington-based research firm. Also, workers at a construction site may live in impoverished neighborhoods miles away, even if the project is being built in a wealthy area, he said.

While there is little doubt the program will be renewed, uncertainty over its final form may hinder investment, McMillan said. Legislators may be forced to use a temporary fix if an agreement can’t be reached by the Sept. 30 deadline, further complicating the issue, he said.

“It has been renewed several times with strong bipartisan support in each case,” McMillan said. “But there are a number of things these days that seem like they should be easy to legislate that aren’t.”