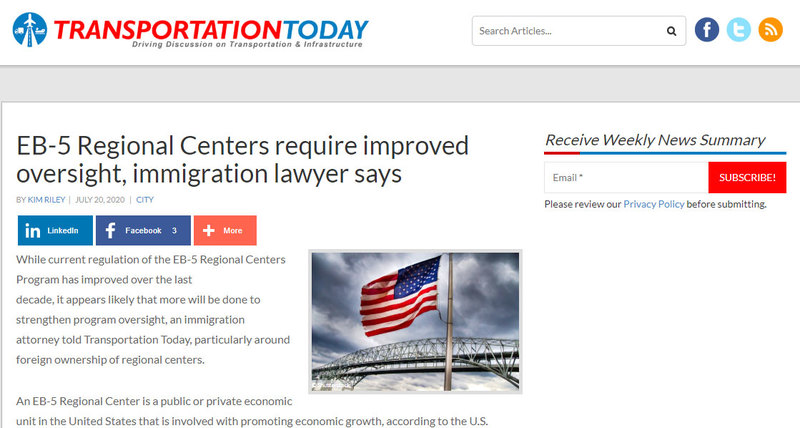 While current regulation of the EB-5 Regional Centers Program has improved over the last decade, it appears likely that more will be done to strengthen program oversight, an immigration attorney told Transportation Today, particularly around foreign ownership of regional centers.

An EB-5 Regional Center is a public or private economic unit in the United States that is involved with promoting economic growth, according to the U.S. Citizenship and Immigration Services (USCIS), which oversees the program. USCIS designates regional centers for participation in the Immigrant Investor Program.

Over the last 10 years or so, the oversight of EB-5 Regional Centers has become much more robust, with the Securities and Exchange Commission (SEC) going after the bad actors on the fringes of the program, while USCIS has provided significant new guidance on expectations, clarified annual reporting requirements, and implemented a program of site visits and random audits, according to Cletus Weber, co-founder, partner and senior attorney at Washington-based Peng & Weber PLLC, a U.S. immigration law firm.

At the same time, Weber said, the industry itself has carefully developed “best practices” and stronger educational programs to help members understand the legal requirements in securities, immigration, banking, and related areas of law applicable to managing investor funds and expectations.

“Absolutely the most important improvements needed going forward are additional clarity of rules and much faster processing times at the USCIS,” suggested Weber. “The agency’s virtual standstill in processing investor petitions and regional center-related applications leaves investors and EB-5 Regional Centers in the dark for literally years on end, creating substantial unnecessary risks for everyone involved with no countervailing improvement in the government’s oversight efforts and no benefit to society in general.”

In fact, he added, USCIS processing delays especially harm the U.S. workers the program was created to help.

If enacted, the legislation specifically would dictate that a person may not be involved with a regional center unless the person is a national of the U.S. or an individual who has been lawfully admitted for permanent residence.

Regarding investments by foreign governments, “no agency, official, or other similar entity or representative of a foreign government entity may provide capital to, or be directly or indirectly involved with the ownership or administration of a regional center, a new commercial enterprise, or a job-creating entity,” according to the text of S. 2540.

The only exception would be for a foreign or domestic investment fund or other investment vehicle that is wholly or partially owned, directly or indirectly, by a bona fide foreign sovereign wealth fund or a foreign state-owned enterprise otherwise permitted to do business in the United States. Such entities may be involved with the ownership, but not the administration of a job-creating entity that is not an affiliated job-creating entity, according to the bill’s text.

“At the other end of the scale is fruitless, onerous bureaucratic red tape,” he said, referring to measures like H.R. 773, introduced in January 2019 by U.S. Rep. Steve King (R-IA) to terminate the EB-5 program.

“Bills and arguments by others to end the EB-5 program reflect a lack of awareness of the enormous power of the EB-5 program to create hundreds of thousands of jobs for U.S. workers every year,” said Weber. “This is especially true now that the COVID-19 pandemic is hammering Americans trying to make ends meet in construction, hospitality and other industries.

Weber also said that the EB-5 program is the only program he’s aware of that creates American jobs at no cost to U.S. taxpayers.

“And in the case of public infrastructure projects, such as transportation, EB-5 not only creates American jobs for zero taxpayer expense, but also saves the taxpayers tens of millions in annual interest payments on public highway, subway and railway projects,” said Weber. “No other government program provides such benefits.”

Regarding oversight of EB-5 Regional Centers, Weber said that clearer rules and better oversight from the start would have helped to prevent some bad-actor problems that previously popped up.

“But it is better late than never for Congress to convert current industry best practices into a set of rules that everyone can understand and follow,” he said. “Such clarified rules will also provide the government additional tools to keep out the occasional bad actor that one may find in any otherwise great program.”

S. 2540 remains under consideration in the U.S. Senate Judiciary Committee, on which both Sen. Grassley and Leahy serve.