Will New Rules Be a Game Changer for the EB-5 Industry? 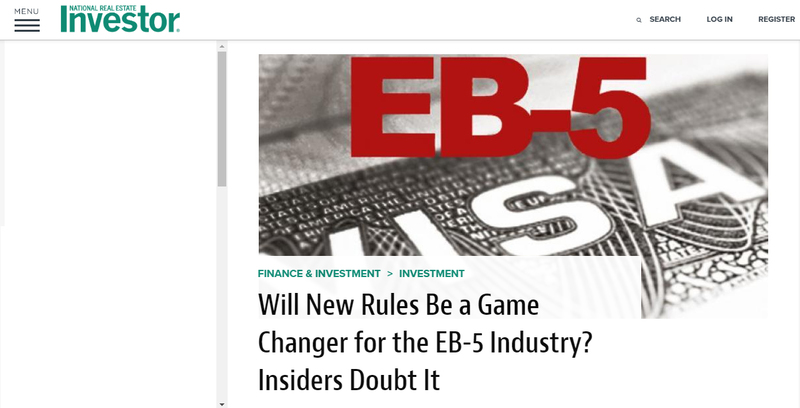 New rules set to go into effect this November don’t offer a fundamental reform of the program.

Proposed EB-5 reforms that have been tied up in a legislative stalemate over the past few years have gotten a major push forward on the regulatory front with new rules that are set to go into effect Nov. 21st.

Yet the rules are drawing mixed reviews from industry players. Some believe they represent a “sea change” for the EB-5 industry, while others fear that it could further drag on a program that has struggled under a cloud of uncertainty and huge backlog of processing applications. Specifically, the two main rule changes that will be administered by the U.S. Department of Citizenship and Immigration Services (CIS) are:

“The new regulations focus on the investment amount, TEAs, and not much more,” notes Brian Ostar, senior vice president, global operations, at EB5 Capital, an active Regional Center in Bethesda, Md. that has facilitated over $800 million in EB-5 investments in six states and the District of Columbia. There are many other considerations, such as the long processing and wait times for immigrant applications and visa availability that did not get incorporated. “Much of the industry is not in favor of these regulations as a stand-in for a full, comprehensive EB-5 bill passed by Congress. Increasing the investment amount without additional reforms doesn't help the industry,” says Ostar.

The EB-5 program is an incentive program for foreign investment into the U.S. that trades green cards for capital. The original intent of the program was to spur economic development and bring jobs to areas with high unemployment. Since it was first introduced in 1992, the EB-5 program has grown to a sizable niche within commercial real estate investment finance, generating billions of dollars in investment capital to commercial real estate and infrastructure projects annually.

According to a 2019 report published by Invest in the USA (IIUSA), a not-for-profit industry trade association for the EB-5 Regional Center Program, the program generated a total of $11 billion in capital investment during fiscal years 2014 and 2015 and created more than 75,000 construction jobs.

It remains to be seen how the new rules will impact the program both in terms of the amount of capital flowing into the program from investors and the number of active EB-5 development projects seeking capital. Historically, developers have used EB-5 as a very low-cost capital source as investors are motivated more by the desire to secure a green card and are willing to accept very low returns on their investment.

The increase in the minimum investment amount is not inconsequential, and at least for some investors, the spike could put EB-5 out of reach. However, the common view is that the higher price alone will not become a big deterrent, especially since the same minimum investment levels have been in place since the program first started nearly 30 years ago.

The drivers fueling demand for the EB-5 program are firmly in place in terms of the need of a family to migrate out of their home countries for reasons such as political instability, socio-economic pressures and security concerns in some Latin American countries still exist, notes Julian Montero, a partner in the Miami office of Saul Ewing Arnstein & Lehr LLP. “That will tend to push people to make these decisions,” he says.

The bigger issue is likely to be the change in how TEAs are qualified. Historically, qualifying TEAs needed to show an unemployment rate by census track that was greater than 150 percent of the national average as reported by the Bureau of Labor Statistics. However, TEAs could be established by combining multiple contiguous census tracts where the unemployment rate of the combined region exceeds the high unemployment threshold. This became a common practice and provided more leeway that allowed even low unemployment areas to qualify.

“What many of us would consider to be not economically distressed parts of big cities had found their way to be qualified as targeted employment areas for EB-5 development projects, that include sports arenas, hotels and other facilities,” says “Glenn Cooper, a partner at Miami-based law firm Nelson Mullins.

Cooper expects the number of applications to decline after the new rules go into effect as people work to absorb and adapt to the new rules. Developers are already asking—how do we adapt to this new paradigm? Are we going to have to shift our projects to other geographical areas? Are the current ones that we have going to work? “There are a lot of issues that the developers in the regional centers and the financial partners are going to have to work through post-Nov. 21,” says Cooper.

Montero is actively working with developers who are going forward with projects that will be located in qualifying TEAs, meaning they will be looking to raise $900,000 from individual investors. “My sense in speaking with developers in many different cities in the U.S. is that those who have experience with the EB-5 industry are going to continue,” says Montero. However, it likely is going to be a more selective group, he adds.

Two of the challenges that are not addressed with the new rules include the temporary status of the program and the backlog of visa applications that is resulting in what has become a multi-year process for investors to actually secure their green cards.

Since 2015, Congress has been kicking the can down the road with short-term renewals of the program. Legislators have been reluctant to put more permanent financing in place for the program while they have debated program reforms. “That has created a huge amount of uncertainty on the industry side and the investor side on whether the program was going to continue or end,” says Cooper.

The program has been renewed to Nov. 21st along with the rest of the federal budget. Prior to that end date, EB-5 will need to be renewed again by Congress. It remains to be seen whether the new rules will pave the way for a more permanent commitment to the program.

The biggest issue from the investors’ side is a huge backlog in the time it takes to receive a green card. Wait times are stretching out two to four years just to get the initial I-526 petition approved, with more years beyond that to secure a conditional status green card. The way the immigration system works in the U.S. is that there are quotas for different countries or regions. China, for example, has extremely long wait times for EB-5 visas that nearly double that of other countries due to what had been a high volume of applications.

“That has created a chilling effect whereby a lot of investors have chosen not to proceed with EB-5 because of the number of years they would have to wait,” says Cooper. The hope for many in the industry is that the new rules might also pave the way for improvements that streamline processing and applications, which would go a long way in reviving investor demand for the program.