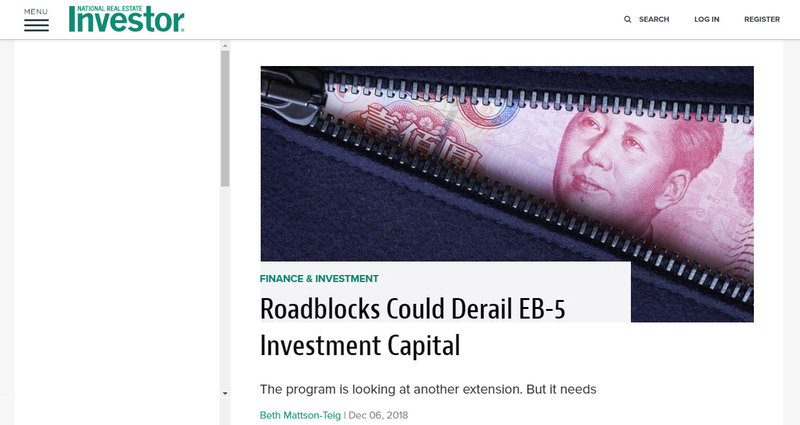 The program is looking at another extension. But it needs a long-term update.

The EB-5 Immigrant Investor program continues to limp along, but challenges that include lack of reforms, short-term extensions and a backlog of investors waiting for visas are causing some to question the future of the program.

EB-5 is an incentive program for foreign investment into the U.S. that basically trades green cards for investor capital that is used to inject low-cost equity financing into economic development projects. The program has been stuck under a cloud of uncertainty for the past few years, with Congress that has failed to come to terms on key reforms. The lack of progress has resulted in a series of short-term extensions since 2015 that have been aimed at keeping the program afloat in the interim. Those extensions have ranged from as little as a couple of weeks to nine months, with the latest extension expected to come on Dec. 7.

“I think it’s fair to state that the industry as a whole is operating with the notion that the EB-5 program will be renewed as part of the Dec. 7th legislative package,” says Julian Montero, a partner at the law firm of Saul Ewing Arnstein & Lehr in Miami. “I don’t believe that any industry folks that are active reasonably believe that the EB-5 will be terminated, or that there will be legislative revisions to the program effective as of Dec. 7th.

Since it was first introduced in 1992, EB-5 has grown to a sizable niche within commercial real estate investment finance, helping to fund projects ranging from infrastructure to office buildings and hotels. Between fiscal years 2012 and 2016, the program generated an estimated $14.4 billion in investment capital, according to Invest in the USA (IIUSA), a not-for-profit industry trade association for the EB-5 Regional Center Program.

Yet opinions on the viability of the EB-5 program going forward are mixed amid formidable headwinds. In addition to lack of reforms, the program has been battling a growing backlog of applications that has resulted in lengthy wait times to secure visas. The backlog is most pronounced among Chinese investors, who in recent years have accounted for about 80 percent of the capital coming into the program.

For example, investors who filed for their visa applications in October were facing estimated wait times of 14 years for Chinese investors as compared to investors from Korea at 2.2 years and Brazil at 1.5 years, notes James G. Aldrich, who leads the firm's immigration team in the labor and employment department at national law firm Dykema. “Obviously there is demand for EB-5 when you look at the backlogs, especially from China,” says Aldrich. However, the long wait times, coupled with tighter policies on international investing by the Chinese government, are restricting capital flows from that country.

Third quarter was one of the slowest for EB-5 investment in close to 10 years, notes Edward Mermelstein, and international real estate attorney based in New York City. A big reason for that drop is the decline in capital coming from the Chinese. “China being very strict on currency controls today has made it very difficult for many people to apply for the EB-5 program,” adds Mermelstein.

One attorney, who did not want to be quoted, described the program as being essentially “dead in the water.” He has stopped working on structuring EB-5 financing on new development projects as the majority of firms he has relationships with are not currently active. Potentially, the backlog could be an easily fixable problem to allocate more resources to improve processes, create efficiencies or increase the number of annual visas allowed through the program. However, there doesn’t seem to be the political will to remedy the problem, notes the attorney.

Moving forward at a smaller scale

Despite barriers for Chinese investors, there continues to be a steady pipeline of investors coming from other countries. For example, South Florida-based Riviera Point Development Group has completed several development projects with EB-5 funding in recent years and currently has three hotel projects underway in Miami and Orlando that are using EB-5 capital.

“There is activity happening throughout the world and EB-5 is very much alive,” says Montero. Saul Ewing has represented families from virtually every country in Latin America from Mexico and Brazil to Uruguay, as well as India, the Middle East, Southeast Asia and Europe. In fact, participation by Latin American investors and Indian investors is at all-time highs, notes Montero. “While it’s true that the volume of capital and investors from Latin America and India don’t nearly equate the volume that was coming from China, it is nonetheless a very important narrative and a positive narrative, because it provides an indication of how healthy this overall program is that it does not need to rely on a single country for existence,” he says.

Discussion has focused on how EB-5 can proceed without inflows from Chinese investors. “I think there is an acceptance that it is viable, and it can proceed in a revised manner as EB-5 3.0 or 2.5,” says Montero. Project sizes have been reduced and the expectation of raising substantial amounts of capital in a short amount of time has also shifted. The target capital raise varies. However, the ideal project size for EB-5 financing these days falls between $20 and $40 million.

The original intent of the EB-5 program was to bring capital to underutilized areas to spur development and job growth in “targeted employment areas.” “My view is that it is a necessary program. So, I think it is going to survive. The question is, in what form?” says Mermelstein. “EB-5 has taken on numerous variations over the past 10-plus years and it is unlikely to go away simply because it does benefit low-income areas that are in need of job creation.”

Foreign nationals can qualify for a visa by investing a minimum of $1 million in a development, or $500,000 if it is invested in a qualifying Targeted Employment Area (TEA). Another stipulation to the program is that each investor must also prove the investment created a minimum of 10 new jobs.

Congress has failed to agree on program reforms with the main sticking point being a disagreement between urban and rural interests on how to define TEA districts. Other proposed reforms would raise the minimum investment amounts, and introduce more oversight to reduce incidents of sponsor fraud or misappropriated funds.

“My impression is that the EB-5 program is more favored by Republicans than Democrats. With the Democrats taking control of the House in January, that could create some difficulties for the program,” says Aldrich. The uncertainty does discourage some developers from getting involved, but the program does seem to keep muddling forward little by little, he adds.