International Students Can Use US Investor Visa to Gain Green Card 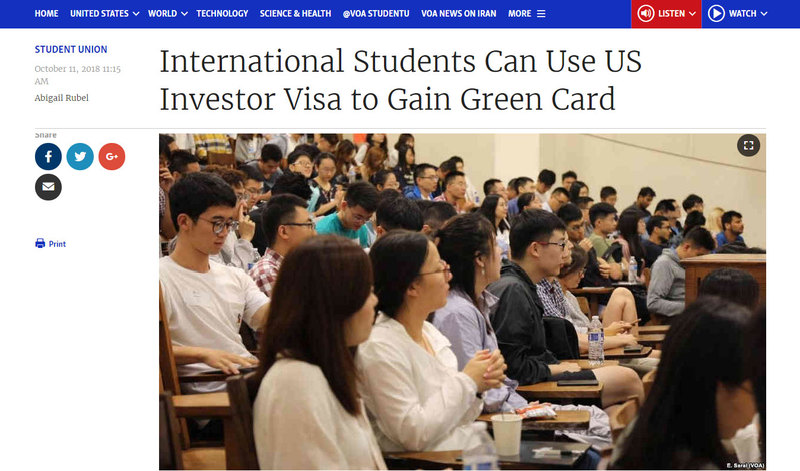 International students attend sessions about life in the U.S., from health insurance policies to how Americans greet each other, during an orientation week.

A lesser-known immigration visa offers international students a path to U.S. colleges and universities — and a green card — but the price is affordable for only a few.

An EB-5, or Immigrant Investor Visa Program, does not restrict where or how much students work off-campus and allows them to stay in the country after graduation, both perks not available to F-1 student visa holders, according to EB-5 Daily, a website that aggregates news about the EB-5 program.

But in exchange for fewer restrictions, EB-5s have a daunting price tag — applicants must invest at least $500,000.

"There are a lot of wealthy international students who come to the U.S., and a lot of them are very motivated [to stay after graduation]," said Ishaan Khanna, a recent college graduate and EB-5 visa holder. "So, for them it makes sense."

A path to immigration

Khanna came to the U.S. from India on an F-1 student visa to study at Loyola Marymount University in Los Angeles. As graduation approached, he started looking for ways to stay and work in the U.S.

"If I wanted to further my career, being in the U.S., especially close to Silicon Valley, was a no brainer," said Khanna, who was looking for jobs in the tech sector. He started researching EB-5 visas during his senior year.

The EB-5 visa program was created in 1990 to encourage foreign investment and create jobs for American workers, according to the Department of Homeland Security.

To receive the visa, a foreigner must invest at least $500,000 either directly in a business or in a regional center, which is a private company that pools such investments.

"An EB-5 regional center is an economic unit, public or private, in the United States that is involved with promoting economic growth," according to the U.S. Citizenship and Immigration Service (USCIS). "Regional centers are designated by USCIS for participation in the Immigrant Investor Program."

Each investment qualifies only if it creates or preserves at least 10 full-time jobs.

The vast majority of EB-5 investors — in 2016, 91.5 percent — have chosen to invest in regional centers. Successful applicants receive a two-year green card that becomes permanent if the investment meets the job-creation standard.

But there is so little oversight of the EB-5 industry that it is open to abuse, critics say.

"I could speak for hours about the corruption in this program," said Republican Senator Charles Grassley, one of the program's most vocal critics.

"They [the investors] put up the money and they don't know what the money is being used for," said Lsu Khanh Pham, an immigration attorney. "Legally, the money is supposed to go into the venture and create jobs."

But sometimes, he said, the money is used to pay back previous loans, or it sits in the bank as collateral.

Sometimes the money is embezzled, according to some court cases. Documentation shows 287 regional centers whose contract with the U.S. government has been terminated for either failing to submit required information to USCIS or for no longer serving the purpose of promoting economic growth. This month, there were 1,382 approved regional centers.

Last year, the family of Jared Kushner, President Donald Trump's son-in-law and a senior White House aide, was investigated for implying that their company's connection with the president could help their investors obtain green cards through the EB-5 program. The investigation is ongoing.

The appeal of a green card is undeniable. With a green card, a foreign student can "work, live, study, as freely as you want," Khanna said.

Students who hold a green card are much more attractive to employers, Khanna said.

"Let's' be honest, if you don't have a green card, it is really hard to get a job in America," he added.

"I interviewed for SpaceX and I remember making it through the first round of interviews," Khanna recalled about the company considered to be a leading innovator in space technology.

"Being able to work in the U.S. without requiring sponsorship is a big deal," he said.

"I would think several hundred students" get an EB-5 visa each year, said Stephen Yale-Loehr, a professor of immigration law at Cornell Law School and attorney for Miller Mayer LLP's immigration practice group. "But nobody knows for sure. It may only be a hundred."

However, Khanna, an EB-5 visa holder from India, said, "I do know a lot of people who do it, especially students."

Because regional centers profit from making investments on behalf of EB-5 applicants, they have a strong incentive to attract every investor they can, no matter how young.

On their websites, for example, the centers tout the virtues of EB-5 visas over traditional F-1 student visas.

The website of the U.S. Immigration Fund, one of the regional centers, included a post with the headline: "4 reasons why EB-5 visa program is the best for studying abroad in the U.S."

Although parents and families typically provide the money, students sometimes decide where to invest.

"That is probably the most daunting part of the EB-5 process for many investors," said Yale-Loehr, the immigration law professor.

But Khanna, who majored in applied-information systems management when he began the EB-5 process, said that determining where to invest was difficult. He spent months doing research and took advantage of resources on campus, "running up to finance professors to ask questions" during his senior year.

"I spoke to several investment issuers and I remember making this long spreadsheet, which listed all the different EB-5 projects and compared their pros and cons side by side," Khanna said.

He eventually invested in a Four Seasons hotel in Puerto Rico through a regional center named EB5 United, based in Santa Monica, California. He now works for EB5 United as the company's director of investor relations for India.

Although the USCIS has tried to protect against fraud, a 2015 Government Accountability Office report found that the agency needed to do even more to protect investors and discern how the program impacts the American economy.

On Sept. 30, the program was extended until after the midterm elections but before the next Congress is seated in January. When the EB-5 program comes up for renewal on Dec. 7, President Trump and a lame-duck Congress will decide its fate. Until then, students looking for alternatives to an F-1 visa will be able to consider an EB-5, if they can afford it.

"If your family has resources, do it," Khanna advised.

And the investment Khanna made for his EB-5?

"It was pretty much my family's life savings which went into this," he said.