As I reported last week, a new lawsuit seeks to stop the government’s illegal practice of counting spouses and minor children of EB-5 investors against the green card limits. I submitted an expert affidavit in the case explaining how the policy has affected the backlog for EB-5 investors, but as Ira Kurzban, the lead attorney on the case, noted in his interview with Stuart Anderson today, the lawsuit could set a precedent that would lead to the exemption of spouses and minor children of other legal immigrants because the same statute governing the policy toward dependents also applies to other legal immigration categories.

For this reason, if EB-5 investors can secure an exemption for their spouses and children, the others will be able to do so as well. The counting policy is relevant for spouses and minor children of employment-based immigrants, diversity lottery winners, and family-sponsored “preferences”—family members who aren’t the spouses, minor children, or parents of U.S. citizens (who have no limits at all). Employment-based categories include EB-5 investors and employer-sponsored immigrants (EB-1, EB-2, and EB-3). The law explicitly requires the counting of the family of EB-4 “special immigrants,” so this change would not affect them.

Table 1 compares current policy using 2016 figures—the most recent year with relevant information available—to the numbers available if the policy changes to correctly reflect the statute (not counting most spouses and children of immigrants). As it shows, current practices permitted almost 1.2 million immigrants in 2016. Of these, the family-sponsored, employment-based, and diversity categories admitted 425,845 immigrants, but of them, 179,772, 42 percent of the total, were the spouses and minor children (dependents) of the primary applicants (the unmarried adult children of citizens, investors, lottery winners, etc.).

Because not counting the dependents would allow 179,772 more primary applicants who then could bring in their spouses and minor children without them being counted, not counting them would increase legal immigration by 322,339, or 27 percent overall in its first year. Total legal immigration would reach 1.5 million annually under this new policy. Total employment-based immigration, including dependents, would increase 140,871, family-sponsored 134,192, and diversity 47,276. 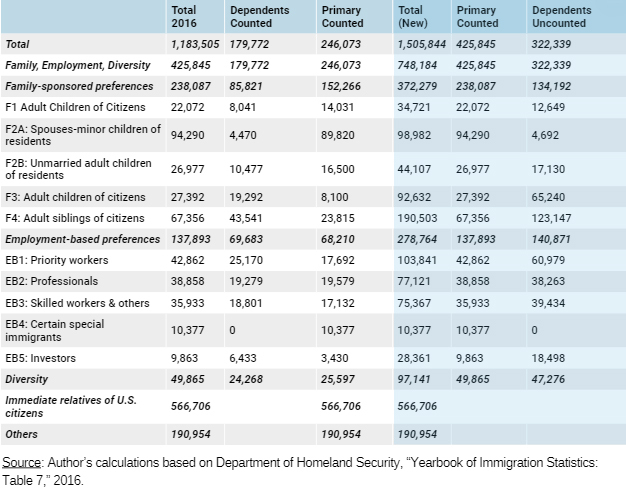 This policy would dramatically decrease wait times for legal immigration and could even eliminate them entirely on the employer-sponsored categories. Total immigration under the policy would further rise in future years because the immediate relatives of U.S. citizens category—for spouses, minor children, and parents of U.S. citizens—is uncapped. After five years, all the new immigrants let in under this policy would be eligible to naturalize and then able to sponsor their parents and, if they hadn’t married already, spouses and their minor children.

Increasing legal immigration would have strongly positive effects on the U.S. economy, especially at a time when U.S. unemployment nears the lowest rate in decades and population growth has dropped to the slowest pace since the Great Depression. With Americans having fewer children than ever, the United States needs new workers, and the evidence indicates that immigrants of all types work at higher rates than the U.S.-born population. While President Trump wants to end the diversity lottery and “chain migration” (i.e. the family-sponsored preferences), these categories provide needed workers at all skill levels. Indeed, they are on average much better educated than the average American today.

Ultimately, the outcome of the lawsuit should be decided on the merits of the law, not its effects on legal immigration or the economy. Nonetheless, should the lawsuit succeed, Americans will be freer to associate, contract, and trade with people born in other countries, and that will be a benefit for both sides.