Investors worry US 'visas to millionaires' program may soon be overhauled 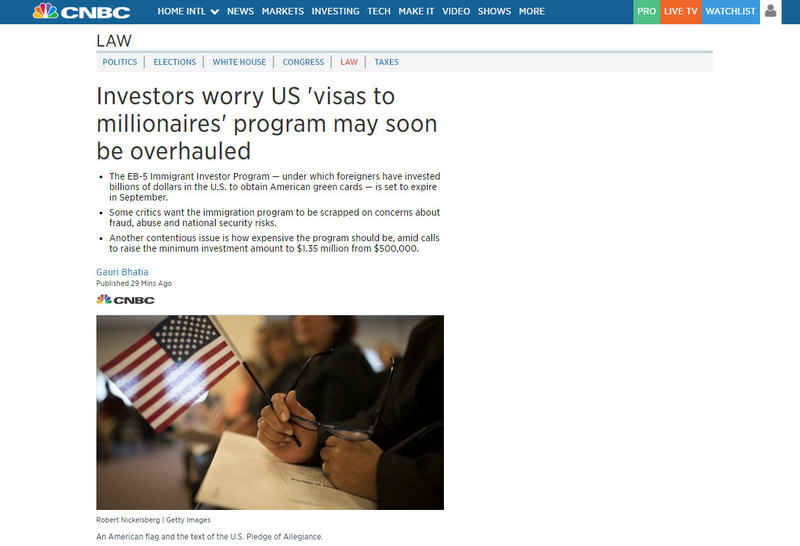 The EB-5 Immigrant Investor Program — under which foreigners have invested billions of dollars in the U.S. to obtain American green cards — is set to expire in September.

Some critics want the immigration program to be scrapped on concerns about fraud, abuse and national security risks.

Another contentious issue is how expensive the program should be, amid calls to raise the minimum investment amount to $1.35 million from $500,000.

An American flag and the text of the U.S. Pledge of Allegiance.

A popular, yet controversial U.S. immigration program that grants "visas to millionaires" is feeling the heat, weeks before it is up for renewal.

On Sept. 30, the EB-5 Immigrant Investor Program — under which foreigners have invested billions of dollars in the U.S. to obtain permanent resident status in the country — is set to expire. It has helped tens of thousands realize their American dream, but it is facing sharp criticism over misuse as politicians and government officials call for radical reforms and have even suggested scrapping the 28-year-old program.

U.S. Sen. Chuck Grassley wrote a letter to President Donald Trump in June saying that the EB-5 program has become riddled with fraud, while Lee Francis Cissna, director of U.S. Citizenship and Immigration Services has asked Congress to allow the program to lapse, as there have been concerns about fraud, abuse and national security risks.

One of the key criticisms about the program is that it was created to direct investment into rural and high-unemployment areas that struggle to get capital and create jobs. Instead, according to Grassley, “big moneyed Manhattan interests” have abused the program.

“The original intent of the EB-5 program was not to develop five-star hotels in Manhattan,” said Brandon Meyer, a partner at Fakhoury Global Immigration. “It was intended for the manufacturing sector, but has instead become the source of funds for real estate developers.”

The EB-5 program works through regional centers that are authorized by the government to raise money from foreigners and direct it to projects that fulfill the criteria of employing at least 10 people. If investments go to "targeted employment areas" — those American neighborhoods that are rural or have high levels of unemployment — then they need only amount to $500,000. If they are in other parts of the country and still fulfill the employment criteria, then investments need to total at least $1 million to be eligible for a green card.

“There are lot of ways for developers to work within the law, which is what they are doing to figure out places within New York City, Los Angeles, and San Francisco that qualify as targeted employment areas,” said Vivek Tandon, founder and CEO of EB5 BRICS, an advisory firm specializing in EB-5 visas.

“We are funding two projects in Manhattan, a Marriott hotel and a commercial office tower, both are half-a-million-dollar investments only," he added. In other words, investors are paying for a new hotel in the heart of America's financial capital while reaping the benefits of investing in a "high-unemployment" area.

One businessman involved in wooing EB-5 investors, Vikram Kumar of AVG America Investments, said that the scheme would be less appealing if it did not allow for funds to go to major cities and were instead relegated to rural areas. "A hotel in Alabama is less likely to succeed than a hotel in Miami," he said.

“You do not want to give Jeff Bezos a seven-year head start.”

Hear what else Buffett has to say

Another problem is fraud. Unscrupulous lawyers, fly-by-night consultants and project developers who either run away with their clients' money or use it for personal use have stained the program, experts on EB-5 visas told CNBC.

Meyer, however, dismissed those concerns, saying: “A lot of the talk about fraud is, though, overblown. There is no more fraud in EB-5 than on Wall Street."

The price may skyrocket

Another contentious issue is how expensive the program should be. There is a call to raise the minimum investment amount of $500,000 to $1.35 million and the $1 million to $1.8 million as there has been no change in the price since the program began in 1990. Those increases account for inflation over the past 28 years, experts said.

The fear that the minimum amount will more than double has led to a mad rush to get people — especially those in places like India and Vietnam — to sign up before the Sept. 30 deadline. “I have spent five of the last six months in India. The run is going to be there for now. India will cross 500 applications easily until Sept. 30,” said Tandon.

Each country is allowed up to 7 percent of the 10,000 visas, issued under this scheme every year, but when other countries do not use their allotted amount, they are given to applicants in other nations who are waiting in line. That is usually China.

India has never used the 700 visas reserved each year for Indian immigrants. Today, the waiting list for a Chinese applicant to get his or her conditional green card is 10 years — up from just two years in 2015 — while for Indian applicants it is still 18 to 24 months, experts told CNBC.

That is why there is a mad rush to tap the Indian rich.

Shan Chopra, managing partner at The Chopras Group — an Indian consultancy for those considering studies abroad — said he got into the EB-5 space only about seven months ago as he saw a huge interest in the scheme among students looking to study in the U.S. “We hope to raise up to $100 million until March 2019 from India via EB-5,” Shan told CNBC.

However, the potential of the Indian market could be clipped if the minimum investment amount is increased because there are various regulatory hurdles for transferring more than a million dollars outside the country, experts said.

There is also hope that, come September, the EB-5 scheme will be extended temporarily without changes as has been done in the past, according to U.S.-based immigration lawyers and consultants. They argued that the U.S. Congress is currently embroiled in a more serious immigration debate involving other types of visas and the EB-5 program may not be on lawmakers' agendas right now. “At the end of the day, EB-5 is just a program that gives visas to millionaires,” Meyer said.

Too good to let go

Another reason for optimism about the program's continued existence is that the EB-5 visa is "pro-business," as it helps match investors with projects, said Ignacio Donoso, an immigration lawyer who has worked in the EB-5 program for a decade.

The White House, he added, was unlikely to take a stand against a program seen as helping businesses.

Trump’s son-in-law, Jared Kushner, whose family runs a real estate firm, has sourced EB-5 funds in the past. For example, the 88 Kushner-Kabr project — a luxury mixed-use complex in New Jersey also known as "Trump Bay Street" — was constructed in partnership with the U.S. Immigration Fund. When contacted, the USIF declined to comment, but the project is listed on its website.

Tandon said he thought it unlikely that Trump would oppose the EB-5 program. "If you think about it, what were President Trump’s promises when he got elected? … He wants jobs being created in the U.S., he wants people to invest in the U.S., that is exactly what EB-5 accomplishes," he said.