EB-5 Visas: Will We Ever Discuss Merit-Based Immigration? 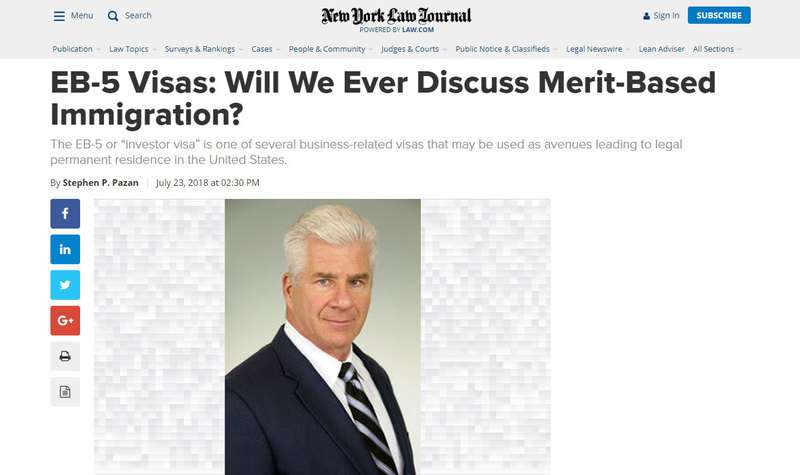 The EB-5 or “investor visa” is one of several business-related visas that may be used as avenues leading to legal permanent residence in the United States.

Lost amidst the controversy regarding the separation of families at the border and calls to abolish ICE are the earlier promises by President Trump to shift towards merit-based rather than family-based immigration.

For many people, merit-based immigration is most closely associated with the polemic H1-B visa program.There is another proven job creating merit-based program, however, that’s received little attention of late, save an embarrassing and possibly misunderstood spate of negative attention back in May 2017, when Jared Kushner’s sister, Nicole Meyer, reportedly was heard to be making promises she couldn’t (or shouldn’t) keep to investors in China, according to the New York Times and other published reports.

The EB-5 or “investor visa” is one of several business-related visas that may be used as avenues leading to legal permanent residence in the United States. It is perhaps the purest expression of merit-based immigration. While it is criticized as citizenship for sale by some, and lauded as a job growth and economic development tool by others,the EB-5 trade group—Invest In the USA (IIUSA)—estimates that the program has resulted in $22 billion foreign direct investment in the U.S. since 2008, and has created 276,000 jobs.

Created in 1990 to Combat Recession

Congress created the EB-5 classification in 1990  to combat unemployment and recession in the United States. USCIS’s Immigrant Investor Program Office (IPO) administers the program. Generally speaking, the law requires that an investor commit $1.0 million to a “new commercial enterprise” (NCE) in the U.S., which NCE must create a minimum of 10 permanent jobs per investor. If the investment occurs in a Targeted Employment Area” (TEA), the investor may invest as little as $500,000. In exchange for his/her investment, the investor receives first a conditional green card, and then, two years later, should the job creation be sustained, a permanent green card, with possible citizenship down the road.

At first, the program was underused, but in 1992 USCIS was authorized to begin the “Pilot Program” whereby approved “Regional Centers” could aggregate investment into larger projects that got a preference in adjudication. The program was discovered by real estate developers, who then figured out how to combine hundreds of individual investments under the program to obtain cheap financing for projects often worth hundreds of millions of dollars. Regional Centers combined the private immigrant investment with bank loans and owner equity. The program is now threatened by its own success, and by congressional dithering on both sides of the aisle, and (perhaps) presidential distraction.

The popularity of the Regional Center model lead to an “oversubscription” of the EB-5 program, whereby the limitation of 10,000 visas per year was exhausted beginning in Fiscal Year 2014. Keen Chinese interest in immigration to the U.S. and the existence of a class of “migration agents” in China also created a situation where about 80 percent of all EB-5 applicants were Chinese. The popularity of the program was such that USCIS reported that over 14,000 petitions were filed in Fiscal Year 2016 for 10,000 available visas.

A Long Wait, Getting Longer

The growing popularity of the program would have lead to a waiting list even if nobody other than Chinese had been interested, but Indians, Vietnamese, Brazilians and others have discovered the program over recent years and have demanded their 700 visas per year.

As a result, the long wait for the Chinese has gotten longer, as the addition to the queue of approved petitions by other nationalities has pushed the Chinese “priority date” further back in time. This visa retrogression means that, according to remarks made by Charles Oppenheim, the U.S. Department of State (DOS) representative responsible for managing the “priority list” for visas and creating DOS’s Visa Bulletin, at the IIUSA’s April 2018 conference in Washington D.C., for many Chinese applicants holding an already approved petition, an EB-5 visa may not be available for 8-10 years.

Vietnamese applicants recently joined the long queue as retrogression has hit that market, too. Indians are not far behind, according to DOS’s Oppenheim. While it may be argued that the popularity of the program should not be viewed as a negative, the IIUSA believes it a blow to the credibility of the program in general, and a lost opportunity for the U.S. economy, that so many interested investors are frustrated.

The IIUSA is also concerned with mismanagement and structural problems plaguing the Investor Visa Office. On June 13, 2008 they issued a 26-page letter to USCIS (Re: Major Issues Facing the EB-5 Industry), discussing the problems perceived in the leadership and organization of the IPO that squanders what IIUSA considers a valuable job-creating opportunity for the U.S. The first concern raised in the letter was the backlog in adjudications at all stages. In fact, as the IIUSA pointed out, the delay in deciding an initial petition filed via an I-526 form is two years. That is an interminable period of time for an investor to leave his or her money “at risk” before s/he finds out if s/he is even superficially eligible.

The continuation of the Regional Center Pilot Program itself is in doubt. It has been renewed in stages with each successive budget crisis, but never truly grappled with in all its complexity. On March 23, 2018, the President signed Public Law 115-141 extending the Regional Center Program through Sep. 30, 2018, when it will expire unless something is done to save it.

There was a distinctly funereal atmosphere at the April 2018 IIUSA conference in Washington DC, as panels of lawyers and developers in this specialized slice of immigration law discussed the growing dysfunction at the IPO and the threats to the EB-5 industry. DOS’s Oppenheim killed the buzz that normally attends such feel-good industry conferences with his Cassandra-like predictions of ever-lengthening waits for Chinese, and also for Vietnamese and Indian investors.

The EB-5 industry is gearing up for its next big get together – the EB Investors Magazine conference July 23 & 24 in Los Angeles. With the end of the pilot program looming, the industry has no choice but to trudge onward, in the hope that someday the politicians in Washington will pay attention to the EB-5 job engine. Furthermore, in recognition of the as-yet-unfulfilled promise of more merit-based immigration, the conference itinerary reflects the industry shift toward non-Chinese sources of investors.

The U.S. economy may be at or near full employment right now, but history has proven that it won’t always be so. In the meantime, the EB-5 industry struggles to find new markets in Latin America, predominantly Brazil, and expects a flurry of last chance petitions prior to the September sunset of the program.

Stephen P. Pazan leads the immigration practice at Barket Epstein & Kearon, LLP in Garden City, NY . In addition, he is currently under contract, advising Baker Tilly Capital, LLC on their EB-5 visa service to the industry; and was an adjudicator of EB-5 petitions in the Immigrant Investor Program Office of USCIS, and a Consular Officer with the Department of State.