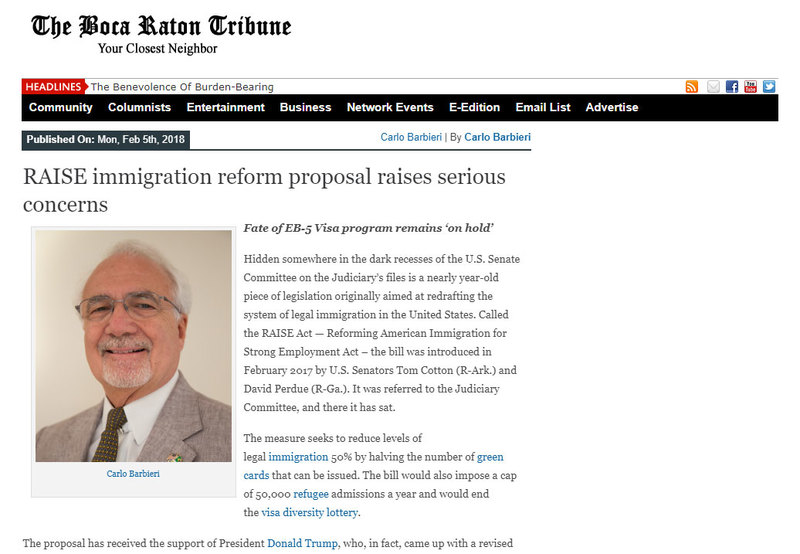 Hidden somewhere in the dark recesses of the U.S. Senate Committee on the Judiciary’s files is a nearly year-old piece of legislation originally aimed at redrafting the system of legal immigration in the United States. Called the RAISE Act — Reforming American Immigration for Strong Employment Act – the bill was introduced in February 2017 by U.S. Senators Tom Cotton (R-Ark.) and David Perdue (R-Ga.). It was referred to the Judiciary Committee, and there it has sat.

The measure seeks to reduce levels of legal immigration 50% by halving the number of green cards that can be issued. The bill would also impose a cap of 50,000 refugee admissions a year and would end the visa diversity lottery.

The proposal has received the support of President Donald Trump, who, in fact, came up with a revised version of the bill last August, one that has been vehemently opposed by Democrats, immigrant rights groups and some Republicans.

Resolution of immigration troubles seems to be on the front burner as the 2018 legislative year moves along, so decisions are bound to happen soon.

Another glitch has occurred in the immigration package. The fate of the EB-5 Investor Visa Program remains unknown. Originally adopted in 1990, it was designed to create jobs and spur national economic development by incentivizing foreign investment in commercial enterprises in return for a Green Card.

Efforts have been made in Congress to revise the bill, and backers hope it becomes permanent as a result. But legislators continue to “kick it down the road.”  On Sept. 30, 2017, Congress yet again delayed EB-5’s expiration to Dec. 8, and on that date, it was postponed again until the finalization of President Trump’s budget, sometime later this month. As a result, local and national experts are unsure what’s up next for the program.

To participate in EB-5, foreign financiers must have a minimum investment of $1 million, or $500,000 for areas with high levels of unemployment – at least 150% above the national unemployment average.

The future of the program is uncertain, as Congress has had trouble passing a long-term extension, and continue pushing back the expiration date. “It’s a huge toss-up in Congress,” said Mikki Canton, managing director of the city of Miami’s EB-5 Regional Center, the only municipally run regional center in the nation.

“We have been waiting on it, extension after extension, and there is a sense of exhaustion and inevitability,” Canton said. “The Senate and the House will most likely incorporate the extension of the program into whichever appropriations bill is happening at the time,” said David North, a senior fellow at the Center for Immigration Studies, a Washington think-tank.

Critics of the program say there needs to be additional transparency, a higher investment requirement and more regulations. Uncertainty also reins at RAISE. In promoting the legislation, Trump administration officials contend that the measure will increase economic growth and hike wages. This contention has been challenged by economists, who overwhelmingly predict that cuts in immigration would have a negative impact on GDP growth.

In April 2017, a group of more than 1,400 economists, with views spanning the political spectrum, sent an open letter to Trump noting the “near universal agreement” on “the broad economic benefit that immigrants to this country bring” and urging him not to seek immigration cuts.

In his recent State of the Union message, the president seemed to hedge a bit on his tough immigration stand, saying he’d allow 1.8 million people from outside the U.S. to enter.  Democrats – who were obviously and visibly upset at the SOTU – are hell bent on fighting the president – in particular, his demand for money to build a wall along sections of the southern border.

The Penn Wharton Budget Model projects that the RAISE Act would increase per-capita GDP by 0.02 percent in the first decade, before falling in the long run by 2040. Cato Institute immigration policy analyst Alex Nowrasteh said that the legislation “would do nothing to boost skilled immigration and it will only increase the proportion of employment-based green cards by cutting other green cards. Saying otherwise is grossly deceptive marketing.”

The only evidence that the administration has cited as justifying its proposals is the work of economist George Borjas, who has defended the bill, arguing that it “makes sense” and that “low-skill immigration, which would likely suffer the largest cuts in the proposed bill, imposes costs on taxpayers and it imposes costs on low-skill workers already here.”

The bill and Trump’s support for it was hailed by groups favoring restrictive immigration policies, such as NumbersUSA and the Federation for American Immigration Reform. Democratic National Committee chairman Tom Perez, Democratic Senator Richard Blumenthal, Republican Senator Lindsey Graham and Florida Republican Senator Marco Rubio all oppose it, largely because of the “arbitrary cap” it sets on immigration numbers.

At the moment, Republicans in Congress are also said to be working with Trump on a solution for the so-called “Dreamers,” those now protected from deportation under former President Barack Obama’s Deferred Action for Childhood Arrivals (DACA) program. Many have argued that those brought to the United States illegally as children shouldn’t be penalized for adults’ decisions.

So, with all these things in their hopper, senators, congressmen, Trump and his colleagues have lots to deal with as the calendar rolls into February – and beyond.

They cannot be allowed to sit on their hands. But at the same time, neither can we.