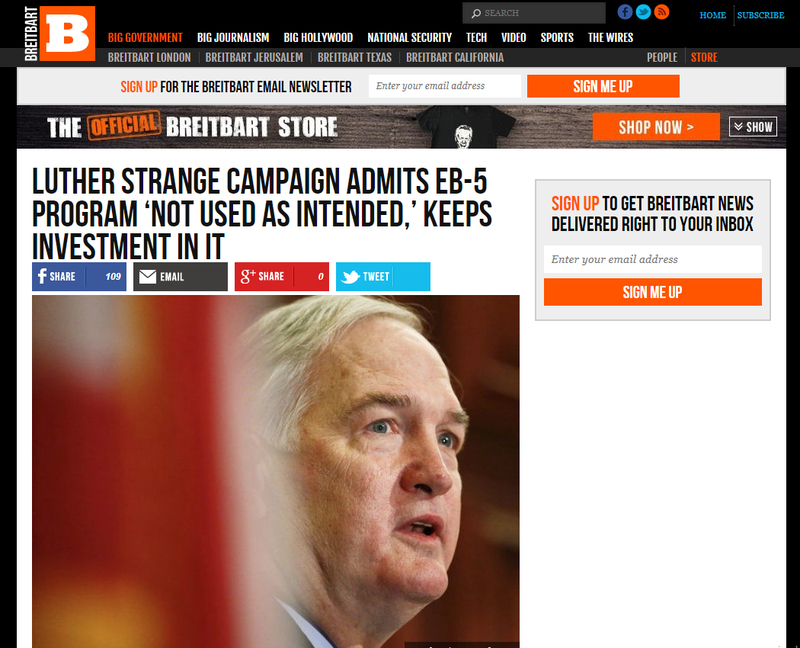 Sen. Luther Strange’s (R-AL) effort to paint himself as the true immigration hawk in the GOP primary campaign for a full term as the Yellowhammer State’s U.S. senator continued to flounder Wednesday in the face of reports Strange is a major stakeholder in a firm that profits from the issuance of visas to rich, mostly Chinese, foreign investors.

Reports rolled in Tuesday of Strange’s one-sixth ownership in Sunbelt EB-5 Regional Center, LLC, a firm that solicits big money foreign investors to put $500,000 to $1 million dollars into projects in the American Southeast in exchange for “golden visas” for themselves and their families. Huntsville, Alabama, CBS affiliate WHNT later reported that Strange profited to the tune of $150,000 from a single EB-5-funded hospital expansion project in Birmingham, AL.

The Strange campaign has been reluctant to address these revelations, declining to answer questions from Breitbart News as to whether the former Alabama attorney general who was appointed in the interim to serve in Jeff Sessions’ U.S. Senate seat would divest from Sunbelt EB-5. “Luther agrees with the Trump administration that there are serious concerns over the EB-5 visa program, which is not being used as originally intended. It’s time for Congress to get to work on these issues,” was the campaign”s response to WHNT Tuesday night.

Despite these “serious concerns,” Strange has made no indication he is seeking to sell his ownership of the Sunbelt EB-5 firm. Strange’s campaign did not respond to repeated questions from Breitbart News as to the appropriateness of keeping a stake in the company and the profits it made off a program he admits is not being used as intended.

The concerns over the EB-5 program that Strange’s team referenced in their statement are widely shared. Sen. Chuck Grassley (R-IA) and Sen. Dianne Feinstein (D-CA), the chairman and ranking Democrat, respectively, of the Senate Judiciary Committee, for example, introduced legislation shortly before Strange took office to entirely eliminate the EB-5 visa.

At the time, Sen. Grassley justified the end of the EB-5 program, saying:

The EB-5 program has been rife with fraud and national security weaknesses. It has also strayed from Congress’ original intent to spur economic development in rural and depressed areas. For years, I’ve worked with bipartisan colleagues in good faith to reform it. Unfortunately, despite its many flaws, EB-5 proponents are apparently content with the status quo, and that’s unacceptable. I was hoping that it would not come to this point, but absent serious efforts to bring about reforms, we need to take the necessary steps to wind down the program and completely mitigate fraud, abuse and threats to our security.

The campaign and allies of former Alabama Chief Justice Roy Moore, Strange’s primary opponent, have stoked up the heat on Strange for his financial ties to what detractors consider the sale of American visas.

Moore himself tweeted Grassley’s quote about the program on Wednesday:

Strange is hiding his ownership in a company that sells EB-5 visas to foreign nationals. Strange says he is for a new tough immigration system that puts America first but profits off the broken system that takes much-needed jobs and business opportunities from Americans.

Alabama State auditor Jim Zeigler issued a statement Tuesday, stating, “Luther Strange is making big money off wealthy foreigners, enabling them and their families to come to America, get legal, and compete against American businesses. This is exactly the type of self-serving that we do not need in Washington.”

Zeigler later told WHNT, “You’ve heard of a green card? Well, this is called a golden card because it takes a half-million dollars, or $1 million dollars, depending on where they’re going,” an apparent reference to the term “golden visa” used by White House adviser Jared Kushner’s former family business while it solicited investments from Chinese businessmen touting Jared’s role in the administration.

Strange also referenced the RAISE Act, the first serious attempt to reform America’s eccentric “family reunification” immigration priority and half of the approximately 1.1 million legal immigrants allowed in each year under the 1965 Immigration Act. “[Strange] looks forward to working hand-in-hand with the White House on legislation like the RAISE Act which would overhaul the program,” the campaign told WHNT.

Strange, who did not co-sponsor the RAISE Act when Sens. Tom Cotton (R-AR) and David Perdue (R-GA) introduced it in August, refused to publicly endorse the bill as recently as two weeks ago when he secured the open-borders Chamber of Commerce’s endorsement on September 7. Moore, by contrast, enthusiastically did so two days earlier.

Despite his apparent shift on the RAISE Act, Strange’s campaign did not reply to Breitbart News’s inquiry as to whether he was now prepared to co-sponsor the RAISE act nor what his earlier objections to the bill may have been.