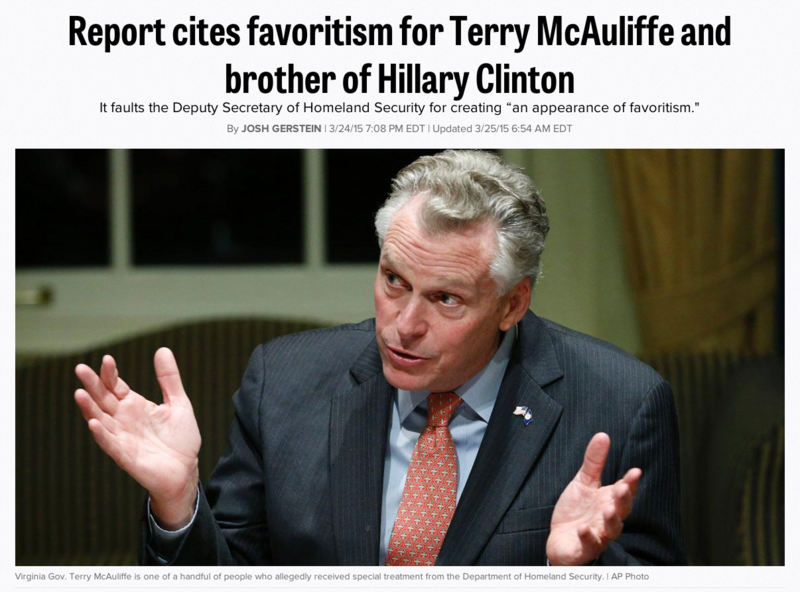 A Department of Homeland Security watchdog report issued Tuesday blasted the agency’s No. 2 official for repeatedly intervening on behalf of well-connected participants in an investor-visa program, including Gov. Terry McAuliffe (D-Va.) and Tony Rodham, a brother of former Secretary of State Hillary Clinton.

The inspector general report faults Deputy Secretary of Homeland Security Alejandro Mayorkas for creating “an appearance of favoritism and special access” as a result of highly unusual steps he took while serving as director of U.S. Citizenship and Immigration Services, which oversaw the investment-based program known as EB-5.

“Mayorkas communicated with stakeholders on substantive issues, outside of the normal adjudicatory process and intervened with the career USCIS staff in ways that benefited the stakeholders,” Inspector General John Roth wrote. “In … three instances, but for Mr. Mayorkas’s intervention, the matter would have been decided differently.”

In a 32-page written statement made public along with the 65-page report, Mayorkas adamantly denied wrongdoing. “I respectfully submit that a complete and total repudiation of the allegations against me is the only correct and just conclusion,” he told investigators in January.

However, a press statement Mayorkas released Tuesday was slightly more conciliatory. “While I disagree with the Inspector General’s report, I will certainly learn from it and from this process,” he said. “As the leader of U.S. Citizenship and Immigrations Services, I had the responsibility to ensure that cases, including the three that are the focus of the report, were decided as the law required and that agency errors were corrected.”

Homeland Security Secretary Jeh Johnson said Tuesday that he has “full confidence” in Mayorkas, but that Mayorkas and others need to be cautious about intervening in specific cases.

“Each of us in leadership must be mindful that, when we become involved in individual matters that happen to reach our desk, we risk the appearance of preferential treatment and the suspicion of our subordinates. As public servants, we must maintain the trust and confidence of all those around us, and be above reproach,” Johnson said in a statement. “I have discussed this with Deputy Secretary Mayorkas and I am confident he understands this.”

Mayorkas’s involvement in a McAuliffe-backed effort to win funds for a fledgling electric car company called GreenTech Automotive became an issue of contention when McAuliffe mounted a successful bid for the Virginia governorship in 2013. The inspector general report cites that as one case in which USCIS employees believed political influence was at work.

“Mayorkas intervened in an administrative appeal related to the denial of a regional center’s application to receive EB-5 funding to manufacture electric cars through investments in a company in which Terry McAuliffe was the board chairman,” the IG report said. “The intervention was unprecedented and, because of the political prominence of the individuals involved, was well as USCIS’s traditional deference to its administrative appeals process, staff perceived it as politically motivated.”

The report also draws attention to the role played by Rodham, who ran an EB-5 visa investment known as Gulf Coast Funds Management, which directed funds to GreenTech. Rodham’s sister was secretary of state during much of the time that Gulf Coast and GreenTech were pressing USCIS for approvals to accept investments that could lead to green cards for foreigners willing to front up more than $550,000 in principal and fees.

Rodham wrote directly to Mayorkas in January 2013 about approval delays, the report said, and Mayorkas forwarded the email to other staffers “with a ‘high importance’ designation.”

The report explores possible discrepancies in accounts of a February 2011 meeting involving Mayorkas and McAuliffe. Mayorkas told investigators he was in a “listen-only mode” at the meeting, but four months after the meeting McAuliffe emailed another DHS official complaining: “We were promised by the Director that our application would receive an expedited review.”

The report said one employee at the meeting wrote in an email after a July 2011 meeting that Mayorkas “noted several times that these cases are affiliated with ‘people of influence’ and ‘people with money’ and he has several more of these on his radar.”

Mayorkas told investigators in an interview that he didn’t remember making such statements, that they sounded “absurd,” and that he was “impervious to pressure.” He argued more broadly that the EB-5 program, aimed at awarding green cards to foreign investors who invest $500,000 in a rural or impoverished area while creating at least 10 jobs, was badly managed and that those involved at the immigration service were making inconsistent decisions on applications.

A spokesman for McAuliffe did not respond to a request for comment Tuesday. The report says investigators “were unsuccessful in [their] attempts to interview McAuliffe.” He dropped his investment and role in GreenTech in 2012 before launching his gubernatorial bid.

Email messages and phone messages to Rodham on Tuesday through the Virginia office of Gulf Coast were not immediately returned.

The report says Reid and Mayorkas spoke about a Las Vegas casino-and-hotel development effort in January 2013. Mayorkas said he promised nothing beyond a “fresh look” at the issue. However, USCIS staffers say they were told that the director had agreed to provide weekly updates to Reid’s staff on the status of the petitions.

Reid spokeswoman Kristen Orthman said Reid was proud of his advocacy for the casino project, known as SLS.

“Senator Reid’s work helped get SLS built and created thousands of Nevada jobs. SLS Las Vegas has revitalized the North end of the Las Vegas Strip and with the coming addition of the Genting Resort the area will continue to grow. … Senator Reid considers it part of his basic responsibility as Nevada’s senator to ensure that projects that benefit Nevada get fair and timely consideration from the federal government,” Orthman said. “Senator Reid will always put Nevada first and fight for Nevada jobs.”

The report claims Mayorkas spoke with Rendell in 2011 and 2012 as USCIS worked on applications related to efforts to obtain investor visas through financing of movies.

Mayorkas said he initially spoke to Rendell at the request of the office of then-DHS Secretary Janet Napolitano and that Rendell complained that USCIS’s mishandling of applications was “costing Pennsylvania the investment of funds and the creation of jobs.”

Mayorkas said that after the first call he looked into the matter with his staff. He could not recall the second call with Rendell, the report said.

Rendell did not immediately respond to email messages seeking comment on the report.

House Homeland Security Committee Chairman Mike McCaul (R-Texas) issued a statement Tuesday calling the report “extremely concerning” and announcing that he will hold a hearing Thursday to explore the issue.

“Digging into the report and reading about specific cases, you can see just how questionable Mr. Mayorkas’ ethics and judgment were. And, just as bad, is the blind eye that the Obama administration turned when elevating this individual to the number two slot at the Department of Homeland Security,” Grassley said. “The sheer number of whistleblowers who came forward is a darn good indication as to how bad things were at the agency.”