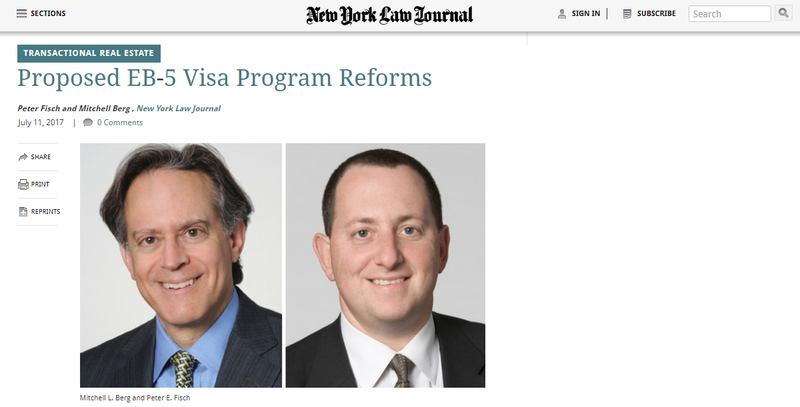 The EB-5 visa program has become a major source of real estate financing nationwide, and in particular for large real estate development projects in New York City such as Hudson Yards in Manhattan, the New York Wheel on Staten Island, and the Pacific Park development in Brooklyn. The EB-5 program provides lawful permanent residence status to immigrants in exchange for an investment of at least $500,000 in a U.S. business venture that creates at least ten permanent jobs. While the real estate industry has to date been the primary beneficiary of investment dollars generated by the EB-5 program, proposed changes to the program's rules could imperil what has been a reliable source of funding for new development projects. With the primary component of EB-5 expiring in September, many stakeholders expect at least some structural changes to be adopted by Congress as part of any effort to reauthorize the program under the Trump administration.

The use of EB-5 capital as a source of financing for ground-up development projects is widespread. With the interest rate attached to EB-5 capital as low as 2.75 percent, the cost of the financing is very appealing to developers. For foreign investors, the program provides a pathway to invest capital in high profile real estate projects while also providing each investor, and his or her family, a visa and the opportunity to live and work in the United States. Some critics, however, have called for eliminating the EB-5 program entirely, and others have proposed reforms that could have a significant impact on the ability of real estate developers to use the program for future projects. While proposals vary, many of the reforms would increase the current investment thresholds, which have not changed in decades, and enhance federal oversight of so-called regional centers (which pool EB-5 dollars and source most real estate EB-5 investments). Certain proposals would significantly revamp the program's scheme for determining which geographic areas qualify for the most favorable treatment under the program's rules, which could raise the cost of EB-5 financing for developers in the New York metropolitan area.

In order to assess the potential impact of reform proposals on the local real estate market, it is important to understand the role of regional centers and the designation of targeted employment areas (TEAs) in the program's structure. Regional centers, which were created to allow participation by passive investors, pool EB-5 dollars from various investors to finance projects in a specific geographic area. The designation of a project as within a TEA lowers the investment requirement for program participants from $1 million to $500,000. As a result of these features, the overwhelming majority of EB-5 projects are financed through a regional center and are located in an area designated as a TEA. In 2014, 97 percent of all EB-5 visas issued relied on such investments.

Funding a project through a regional center also helps investors meet the job-creation threshold of the EB-5 program by removing the onerous requirement, which would otherwise apply, that the immigrant investor directly manage the job-creating business. In addition, projects financed through a regional center are able to meet the program's job creation requirements by counting jobs created indirectly through the economic activity of the project—for example, counting any jobs created by a supplier to a construction site. This feature allows investors to count jobs created through the broader economic impact of a particular project, and makes it easier to meet the program's job creation requirements than would otherwise be the case if the investor could only count workers directly employed by the enterprise in which the investment has been made.

While some local real estate developers have obtained EB-5 financing through independent regional centers, others have created their own in-house center, such as the organization created by Related Companies to manage the $600 million in EB-5 capital that it used to help finance the construction of Hudson Yards.

The majority of investments through the EB-5 program are dedicated to projects in TEAs.7 States can designate TEAs by identifying a specific geographic area suffering from high unemployment (at least 150 percent of the national average rate). States enjoy wide latitude in identifying TEAs, and the United States Citizenship and Immigration Services (USCIS), which administers the program, has generally deferred to states in drawing TEA zones.8 For instance, some states have combined separate census tracts, with varying unemployment rates, to create a single TEA designation.

Some critics characterize this practice as a form of gerrymandering. They argue that designating a TEA that combines high-unemployment areas with nearby low unemployment areas—thereby enabling states to channel EB-5 capital to affluent metropolitan areas—is contrary to the purpose of the program. Because only a limited number of EB-5 visas are made available to investors each year, regions of the country that suffer from chronic underinvestment and high unemployment may not be able to compete for EB-5 financing with projects in large urban centers where the benefits of the program are arguably less necessary. For example, the International Gem Tower, a mixed condo and office tower in the Diamond District completed in 2014, qualified for EB-5 financing under a TEA designation, as have the multi-billion-dollar developments of Pacific Park in Brooklyn and Hudson Yards on the west side of Manhattan. In the case of Hudson Yards, the project qualified using a geographic designation that linked census tracts starting in Chelsea, then cutting across Manhattan, and finally moving north of Central Park to neighborhoods with higher unemployment rates.

Critics of the program also point to EB-5 funded projects that have involved allegations of fraud. Last year, the executives of a Vermont ski resort were accused by state and federal officials of fraud involving EB-5-financed development projects at the Jay Peak and Burke Mountain ski resorts. Investors were told that EB-5 funding would be used to finance the construction of a ski resort, but money was allegedly used to fund deficits from earlier projects or cover personal expenses of the company's owners. Between February 2013 an December 2015, the Securities and Exchange Commission filed 19 cases involving EB-5 offerings, half of which involved allegations of fraud.

While Senators Charles Grassley of Iowa and Dianne Feinstein of California have jointly introduced legislation in the past to terminate the EB-5 program entirely, most reform efforts focus on raising the minimum investment threshold for participants in the program, revising the metrics that are used to measure job creation, and changing the method used to determine TEA designation. Perhaps the most serious threats to the continued use of the EB-5 program in New York City are proposals to change the criteria that may be used to designate a TEA. Some proposals would require the use of statistics regarding the poverty rate and median family income of a given census tract to determine whether a geographic area should qualify as a TEA.

Other proposals would prevent the combination of separate census tracts that are not adjacent to the proposed development site. Such an approach could have prevented projects like Hudson Yards, which relied on a string of contiguous census tracts stretching from Midtown through Harlem, from qualifying as a TEA. Invest In The USA, a business lobby, recently conducted a study on a variety of proposed reform options for TEA criteria and found the various proposals would each disqualify between 60 and 90 percent of New York City real estate projects that have used EB-5 capital.

In response to the concern that the program has not been used to attract new investment to areas of the country with high unemployment rates, industry figures have proposed reforms that would preserve the current method of designating TEAs but would set aside a specific number of visas for immigrants investing in rural areas, a move Senators Grassley and Patrick Leahy of Vermont supported in a proposed EB-5 reform bill they introduced in 2015.

Other congressional reform proposals would raise the minimum investment thresholds, which have not changed since the 1990s. USCIS under the Obama administration proposed new regulations which would, among other changes, increase the investment minimum from $500,000 to $1.35 million for projects in TEAs and from $1 million to $1.8 million for projects outside of a TEA designation. Some real estate industry stakeholders have publicly supported raising the minimum investment thresholds, but by amounts well below the Obama administration figures. Representatives of regional centers have long insisted that raising the investment threshold would drive investors to other countries, including to Germany or the United Kingdom, which have similar programs.

A final set of reforms would affect the way regional centers operate by changing the manner in which the program measures job creation. Senators Grassley and Leahy, along with Representatives Bob Goodlatte of Virginia and John Conyers, Jr. of Michigan, submitted a public comment in response to the proposed USCIS rulemaking advising the agency to limit the ability of EB-5 investors to claim jobs attributable to non-EB-5 investment. Under the proposal, in addition to receiving credit for the ratable shares of jobs based on the proportion of the total investment made by EB-5 investors, EB-5 investors may only claim up to 30 percent of jobs attributable to non-EB-5 capital sources. This is a departure from the current practice of attributing all jobs created by a project to EB-5 investment, regardless of the proportion of EB-5 to non-EB-5 capital sources.

Such a proposal would have a direct impact on the real estate industry, where EB-5 capital has often been layered on top of more traditional sources of funding and construction lending. In addition, while developers have not commonly relied on meeting the program's job creation requirement by counting jobs created by prospective building tenants, the proposal would prohibit using such a model to meet the EB-5 job count. These reforms would seriously impede the ability of foreign investors to use economic models that include indirect job creation in order to meet the program's job-creation requirement.

Even strong supporters of the EB-5 program, such as New York Senator Charles Schumer, recognize that certain reforms may be necessary to address waste, fraud, and abuse to ensure the program is reauthorized beyond the end of September.20 As industry groups continue to monitor the legislative process in Congress, participants in the New York City real estate market should remain aware of how some of the proposed reforms could increase the cost of financing new construction or delay the start of construction for new projects.