Seven of the Biggest Urban Projects Under Development Across US 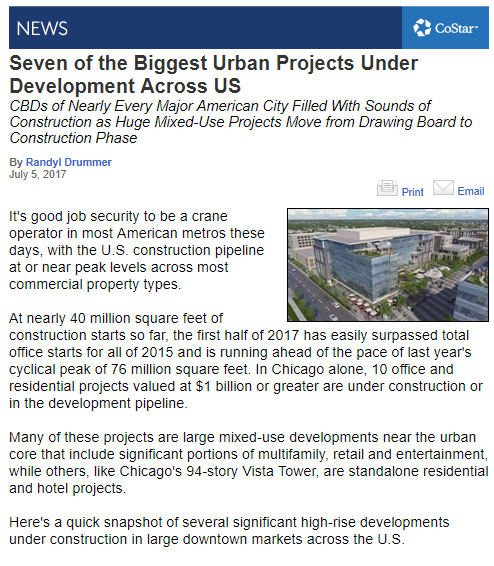 It's good job security to be a crane operator in most American metros these days, with the U.S. construction pipeline at or near peak levels across most commercial property types.

At nearly 40 million square feet of construction starts so far, the first half of 2017 has easily surpassed total office starts for all of 2015 and is running ahead of the pace of last year's cyclical peak of 76 million square feet. In Chicago alone, 10 office and residential projects valued at $1 billion or greater are under construction or in the development pipeline.

Many of these projects are large mixed-use developments near the urban core that include significant portions of multifamily, retail and entertainment, while others, like Chicago's 94-story Vista Tower, are standalone residential and hotel projects.

Here's a quick snapshot of several significant high-rise developments under construction in large downtown markets across the U.S. 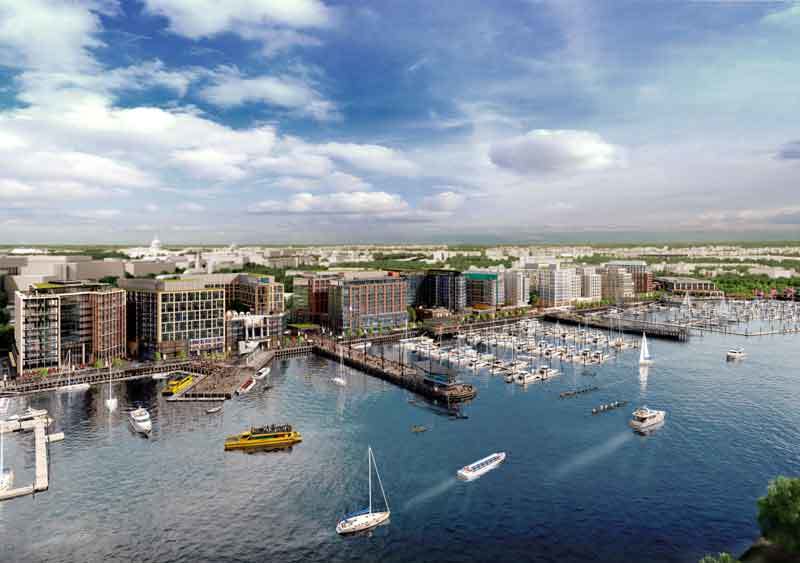 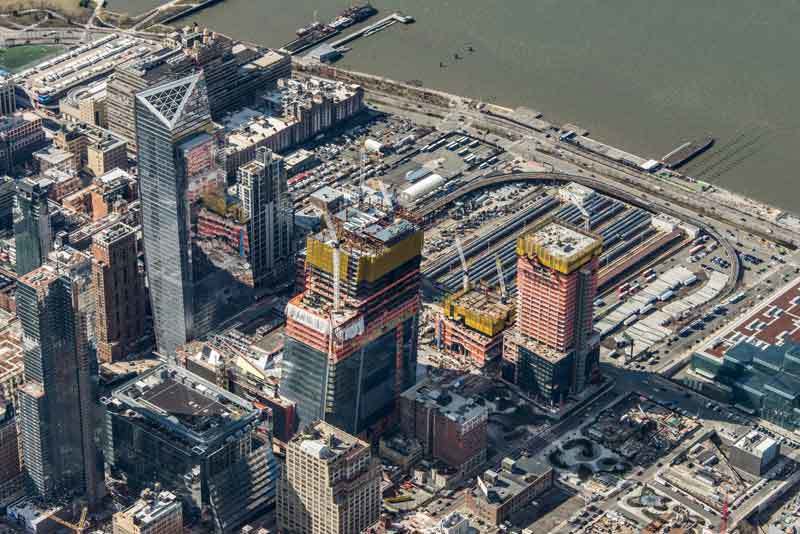 At around $20 billion, Related Cos. Hudson Yards project may be the most expensive master development under construction in the U.S., if not the world. As construction

Related Companies and Oxford Properties Group are looking to raise a fresh $380 million from EB-5-investors to fund new buildings in their Hudson Yards mega development. According to an advertisement from Chinese migration agency Wailian Group, the latest financing would help pay for the 1.1 million-square-foot mixed-use tower 35 Hudson Yards, the 1.7 million-square-foot office building; 55 Hudson Yards and for a platform over the rail yards.

Oxford and Related have reportedly already raised $600 million in EB-5 funds for other buildings in the complex. Hedge fund Third Point is said to be close to completing a lease for 75,000 square feet at Related’s 55 Hudson Yards.

Related and Oxford secured a $1.2 billion construction loan from U.K.-based Children’s Investment Fund for 35 Hudson Yards last year. The tower will include apartments, office space, a spa and an Equinox-branded hotel. The first project in the development, 10 Hudson Yards, opened in May of last year. The tower at 55 Hudson Yards, now under construction, has landed such tenants as hedge funds Third Point Management and Point72 Asset Management as well as law firms Boies, Schiller & Flexner and Milbank, Tweed, Hadley & McCloy.

Related and Oxford have also begun sales for the 285 units at 15 Hudson Yards, while Hudson Yards, home to Boies, Schiller & Flexner; Milbank, Tweed, Hadley & McCloy LLP; Point72; and MarketAxess, will open next year. The 1-million-square-foot Shops and Restaurants at Hudson Yards and the five-acre Public Square and Gardens will open in late 2018, followed in 2019 by 30 Hudson Yards, where KKR, Wells Fargo Securities, Time Warner, CNN, HBO, Turner Broadcasting, Warner Bros., and DNB Bank have signed leases, and the site’s mixed-use tower, and 35 Hudson Yards.

Almost everyone has heard of San Francisco's tallest building, Salesforce Tower, scheduled to open in July. However, work quietly got underway in April on Oceanwide Center at First and Mission Streets, which is expected to include the city's second-tallest tower when completed in 2021.

The $1.3 billion mixed-use complex, actually comprised of two towers, the 910-foot-tall, 61-story First Street Tower and the 625-foot-tall, 54-story Mission Street Tower, is being developed for China-based Oceanwide Holdings by a joint venture of general contractors Swinerton and Webcor. The towers were designed by London-based Foster + Partners and architect Jeff Heller of locally based Heller Manus.

The larger building is a steel exoskeleton-covered tower topped by a crown that will include 265 condominiums and 1 million square feet of office space. The shorter structure will include a 171-room Waldorf Astoria hotel. The development includes several public plazas and green space tying together nearby walkways and alleys. 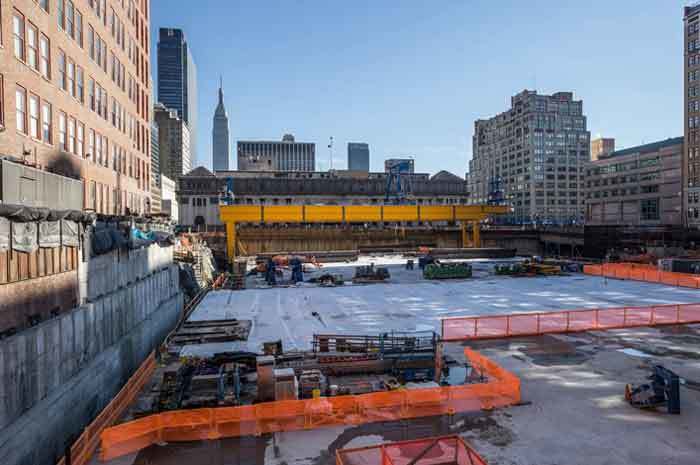 Brookfield earlier this year began leasing of The Eugene, the first for-rent building to complete construction in the eight-acre development. Also in March, Brookfield announced a 60,000-square-foot Whole Foods store that will serve as a "major culinary anchor" for the development.

The grocery store will be located in Five Manhattan West, a 16-story tower under construction at 10th Avenue and 31st Street. Brookfield has also signed leases with law firm Skadden Arps and the National Hockey League at Manhattan West. The 2.1 million-square-foot, 67-story One Manhattan West is slated for deliver in the second half of 2019, with other buildings at various stages of development.

The towers will be built on a platform over Penn Station storage tracks along Ninth Avenue adjacent to the future Moynihan Station, with the west tower reaching 995 feet, becoming one of the tallest buildings in New York City and the world. Pfizer is in talks with Brookfield for 600,000 square feet, with the pharma giants planning to sell its East 42nd Street headquarters buildings where it occupies 1 million square feet. 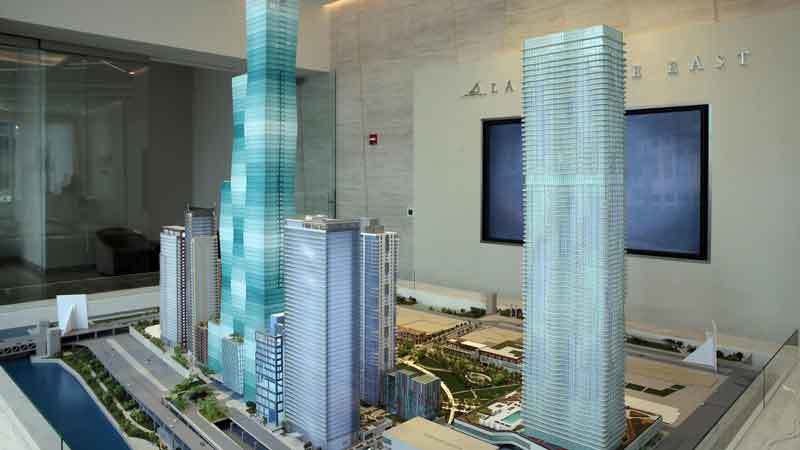 Of the 43 high-rise projects under development in Chicago, including 10 valued at $1 billion or more, none is taller than Vista Tower, a 94-story skyscraper on East Wacker Drive expected to be the Windy City's third-tallest tower when it opens in 2020.

Second-floor concrete was recently poured for project, which will include 406 condo units and 190 hotel rooms.

And Chicago-based developer Magellan Development Group isn't stopping there. Magellan is expected to provide details soon on three more towers and a hotel and residential project on Lake Shore Drive in the vicinity of Studio Gang-designed Vista Tower, which broke ground nine months ago.

Magellan and Dalian Wanda Group, its China-based investment partner, recently took out a $700 million construction loan, one of the largest on record in Chicago, from Ping An Bank, a subsidiary of Chinese conglomerate Ping An Insurance. 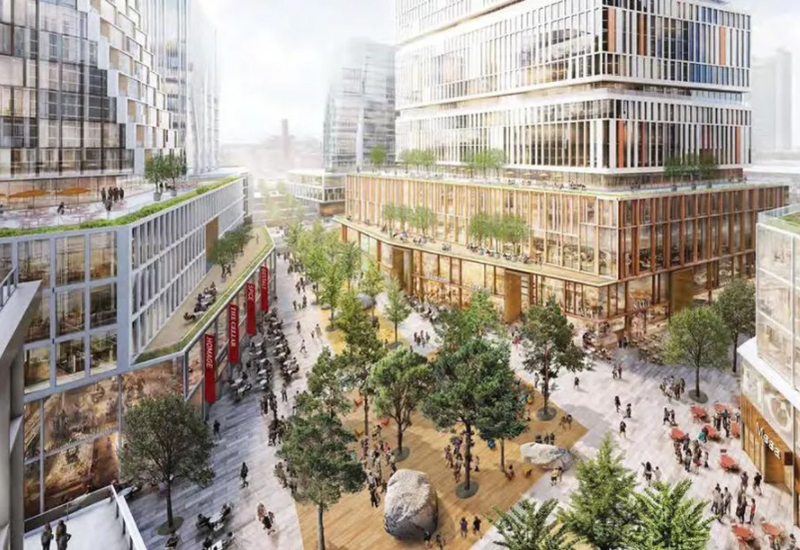 Near BGI's project, developer Cottonwood Management officially broke ground on June 13 on a $900 million, 1.33 million-square-foot Seaport District development dubbed Echelon Seaport. The three-building project is set to have 733 apartments and condos, with the 448 spread over two towers. A third tower will have 285 apartments. The buildings could stretch as high as 21 floors.

Echelon Seaport will include a 19,000-square-foot landscaped plaza accessible to the public and 125,000 square feet of restaurants and retail over two levels. There will also be several hundred parking spaces as well. All totaled, it will unfold over 3.5 acres of very, very valuable land at B Street and Seaport Boulevard.

Los Angeles-based Cottonwood hopes to wrap construction in 2020, and to open a sales office for the condos before the end of the year. 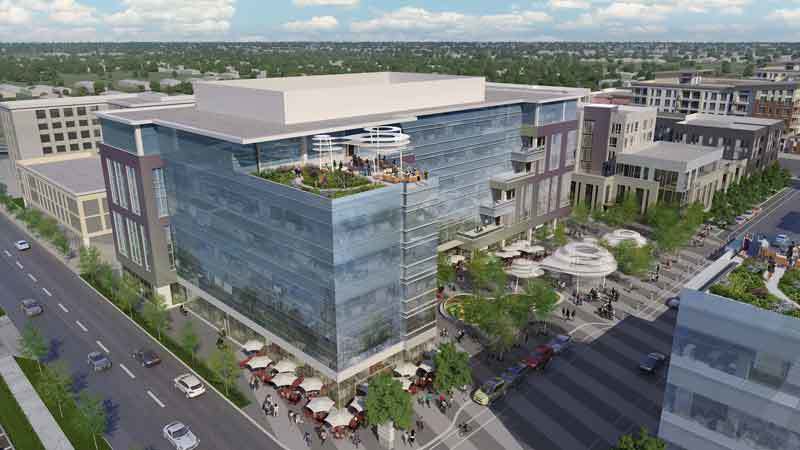 This 35-acre transit-oriented development in the Stapleton neighborhood around LoDo’s Union Station has been in the planning stages for years, but an agreement with developer D.H. Friedman Properties for a 120-unit condominium building allowed master developer Forest City to announce the project's first phase earlier this month.

Initial construction of Central Park Station One will also include a 190,000-square-foot office building, 300 apartment units and 60,000 square feet of retail south of the Regional Transportation District’s Central Park transit station. Newmark Knight Frank is handling leasing duties for the project, expected to break ground early next year, with delivery project for mid-2019.