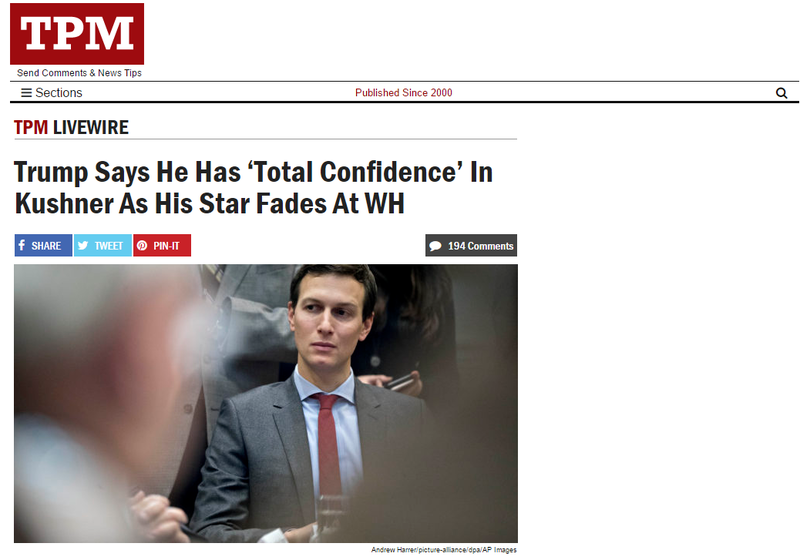 President Donald Trump defended his son-in-law Jared Kushner on Sunday as reports on Kushner’s contacts with Russian officials piled up and his clout in the White House reportedly began to fade.

“Jared is doing a great job for the country,” Trump said in a statement to the New York Times. “I have total confidence in him. He is respected by virtually everyone and is working on programs that will save our country billions of dollars. In addition to that, and perhaps more importantly, he is a very good person.”

Yet despite Trump’s public display of support for Kushner, the President has become increasingly unhappy with Kushner, according to the New York Times. Trump was not pleased when Kushner’s sister pitched EB-5 visas to potential Chinese investors, the Times reported. And the President recently told Kushner to quit pushing for the ouster of Steve Bannon, another top advisor with whom Kushner has constantly butted heads, per the Times.

NBC News reported Monday morning that some in the White House have suggested Kushner “lay low” after a flood of reports on Kushner’s contacts with Russian officials before Trump took office. The Washington Post reported earlier in the weekend that some White House aides have discussed that Kushner should have a diminished role in the administration.

Over the past week, the White House has been hit with several news reports about Kushner’s contacts with Russian officials, as well as reports that Kushner is now a subject in the FBI’s Russia probe. Kushner reportedly asked the Russians to establish a secret communications channel with the Trump team through the Russian embassy.