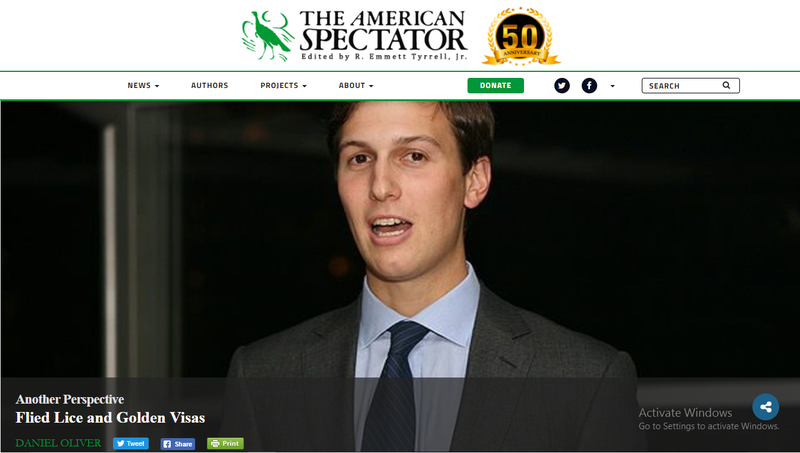 Poor Nicole Meyer, Jared Kushner’s sister: she’s had to pretzelize herself because she mentioned that she was… Jared Kushner’s sister when she was pitching a real estate deal to a group of Chinese businessmen. Denizens of the left-wing fever swamp, taking time out from incessant complaining about President Trump’s governing process, have spent the last week beating up on her and other Kushners because the sister was dangling EB-5 visas, known colloquially as “golden visas,” to Chinese businessmen if they invested the EB-5 statutory minimum requirement of $500,000 in a U.S. project.

For the Left there were, apparently, two scandals: the EB-5 program and Jared Kushner’s sister. She actually mentioned that President Trump’s son-in-law and advisor, Jared Kushner, was of the same Kushner family that was pushing the real estate deal.

It is worth pausing a moment to compare China with Russia. Russia is a backward country: it’s had a major recession, and without even a high level to recess from. Its gross domestic product fell during 2015-16 by more than 4 percent. Real incomes declined by 10 percent. Its population is declining, and its annual GDP is on par with far smaller and less populated Italy, which, as a wit remarked years ago, isn’t really a country — it’s just a geographical location.

China, on the other hand, is, relatively speaking, booming. According to the World Bank: “Since… 1978, China has… experienced rapid economic and social development. GDP growth has averaged nearly 10 percent a year — the fastest sustained expansion by a major economy in history.” The Chinese aren’t just making pretty paper parasols anymore, and they’re not having flied lice for lunch either — unless that’s what you’re having, because it’s your lunch they’re eating.

Basically, the Russians are incompetent; the Chinese, super-competent. Yet the media have ascribed to the Russians the ability practically to manage the U.S. presidential election by remote control. But the Chinese, we are led to believe, weren’t even able to figure out that Nicole Kushner Meyer, who was making the pitch in Beijing, was Jared Kushner’s sister.

Somehow that just seems… improbable. A stretch, for the purpose of venting anti-Trump frustration.

Second: what’s wrong with Mrs. Meyer’s discussing the EB-5 visa program with the investors? Critics say the program is just a way for rich people to buy their way into the U.S. But that’s not correct. The program is also, or at least in theory is also, a way to create jobs in this country by encouraging rich people to invest serious money here.

If an application is approved, the investor and “derivative family members” will be granted conditional permanent residence for a two-year period. The investment must be either $1,000,000, or $500,000 if it is to a “Targeted Investment Area.”

There must be evidence that the new commercial enterprise will create at least ten full-time positions and that the number of existing employees is being or will be maintained at no less than the pre-investment level for a period of at least two years.

Last year, 10,000 green cards, the statutory maximum, were granted under the EB-5 program, 9,128 of which went to people from China — where, incidentally, according to a former U.S. ambassador to China, there are more people who speak English than there are in the U.S.

Senator Chuck Grassley (R-IA) has said, “The EB-5 regional center program has been plagued by fraud and abuse,” and that “it poses significant national security risks.”

That may be, though Sen. Grassley voted for the provision in 1990 as did then Rep. Chuck Schumer (D-NY), now the Senate minority leader. And it may be a terrible program for other reasons not mentioned by Sen. Grassley. But as of now, which is when Mrs. Meyer was pitching to the Chinese, the EB-5 program is the law of the land. If it’s a bad law, that’s not her fault.

It is reasonably common for countries to grant citizenship to wealthy people who will invest in the country. Only on the American Left is there a sense that immigration should be restricted to the tired, the poor, and the huddled masses (whether or not they can learn to speak English, so long as they’ll vote for Democrats).

The whole attack on the Kushners has been nothing other than more resistance by the tired, poor, and huddled Democrats — the same people who were shocked that Donald Trump took all the deductions the law allowed on his income tax returns.

If Donald Trump sang, “Jose, can you see by the dawn’s early light?” the Resistance would accuse him of having cut off nighttime electricity to Mexican communities.

That may seem like good partisan politics to Democrats, but it’s not clear how their conduct helps the governing process — about which they complain, incessantly.