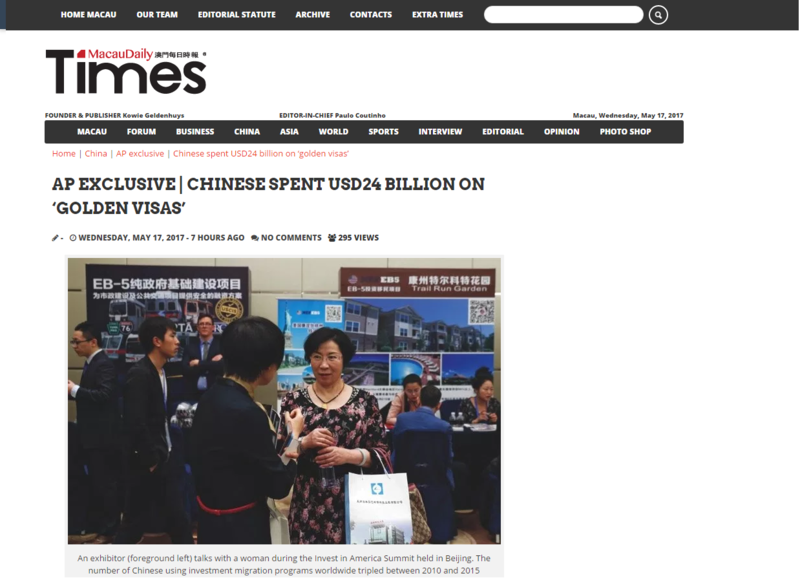 When the sister of President Donald Trump’s son-in-law Jared Kushner promoted investment in her family’s new skyscraper from a Beijing hotel ballroom stage earlier this month, she was pitching a controversial American visa program that’s proven irresistible to tens of thousands of Chinese.

More than 100,000 Chinese have poured at least USD24 billion in the last decade into “golden visa” programs across the world that offer residence in exchange for investment, an Associated Press analysis has found. Nowhere is Chinese demand greater than in the United States, which has taken in at least $7.7 billion and issued more than 40,000 visas to Chinese investors and their families in the past decade, the AP found.

The Chinese investors flocking to these programs are people like Jenny Liu, a doctoral student in the eastern city of Nanjing, who sold her apartment two years ago and moved in with her parents. She used the money from the sale to invest $500,000 in a hotel project in the United States. If the project creates enough jobs in two years, she’ll get a prized “green card” and a pathway for a less stressful education for her 9-year-old son.

“My son has a lot of homework to do every day, but I don’t think he has learned a lot from school,” Liu said. “I hope he can actually pick up some useful knowledge or skills rather than only learn how to pass tests.”

The flood of investors reflects how China’s rise has catapulted tens of millions of families into the middle class. But at the same time, it shows how these families are increasingly becoming restless as cities remain choked by smog, home prices multiply and schools impose ever-greater pressure on children. They also feel insecure about being able to protect their property and savings.

Their money goes toward government bonds, businesses, mountain ski resorts, new schools and real estate projects, including a Trump branded tower in New Jersey built by the Kushner Companies, once run by Jared Kushner, now a White House senior adviser. But the industry is murky, loosely regulated and sometimes fraud-ridden — in the U.S., federal regulators have linked the EB-5 visa program to fraud cases involving more than $1 billion in investment in the last four years.

The EB-5 program and many others like it market heavily in China.

China’s “golden visa” investors are part of a wave characterized not by poverty, persecution or war, but by people with steady jobs and homes who are pursuing happiness that’s eluded them in their homeland.

Key to their spending power is China’s real estate boom. Real estate prices in China’s largest cities have more than tripled in the last decade, with prices in Beijing rising by an average of 25 percent a year during that time. Since late 2015 alone, Beijing’s home prices have jumped 63 percent, making a 1,300 square-foot (120 square-meter) apartment worth more than $1 million.

A family that gained ownership of an ordinary apartment more than a decade ago can now sell it for the price of a “golden visa.” And as their dissatisfaction with China’s problems grows, more families are choosing to do so.

The AP obtained data from officials in 13 countries on how many Chinese have used their investor programs since 2007. To estimate money spent, the AP multiplied the numbers of Chinese investors in each country by the minimum investment required, making the AP’s figures for each country an undercount.

The market leader is the United States’ EB-5 program, which gives green cards to anyone who invests $500,000 in a business that creates or saves at least 10 jobs. But Portugal has drawn $1.7 billion over four years from Chinese investors willing to buy property to support its faltering real estate market. Spain and Greece offer similar programs. Chinese have bought the most visas in all three countries.

The EB-5 program has been heavily criticized by government watchdogs and targeted by lawmakers of both parties in Congress, who say it promotes fraud and helps developers building megaprojects more than struggling communities. Defenders of EB-5 say it creates jobs and provides vital funding for projects across the United States, from massive developments in New York to hotels, restaurants and small businesses in the Midwest and on the West Coast.

Nicole Meyer, Kushner’s sister, appeared this month at events in Beijing and Shanghai to promote One Journal Square, a New Jersey tower project planned by the Kushner family that would be partially funded through EB-5 investment. The presentation included a photo of Trump and vague promises that the project had “government support” and was “founded by celebrity developers.”

The company later apologized for any implication that her brother was supporting the project, and Meyer pulled out of a scheduled presentation in China this past weekend. The White House said Kushner would follow conflict of interest policies and that Trump and Congress would review “all the various visa programs” in due course.

Many Chinese are well aware of the risks involved, but invest anyway.

Du Juan attended a seminar in Beijing held by an investment group pitching ski resorts and other projects. Her primary focus is getting her 10-year-old daughter enrolled soon in an American school.