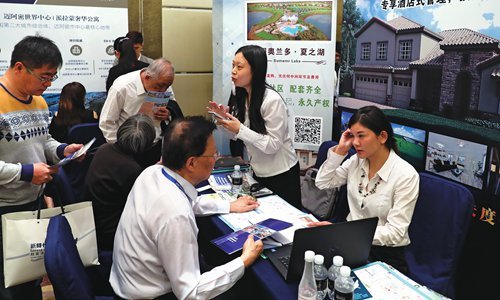 Visitors seek information about the US government's EB-5 visa program at the exhibitor booths at Invest in America Summit on May 7 in Beijing. Photo: IC

Wealthy Chinese investors are mixed on pouring millions of dollars into a property development project linked to the family of Jared Kushner, US President Donald Trump's son-in-law, in exchange for permanent US residency.

Around 250 mostly middle-aged Chinese investors, some of whom brought their children, attended presentations over the weekend for a two-tower luxury apartment project called Kushner 1 or One Journal Square in New Jersey. The events were held in Shenzhen and Guangzhou, South China's Guangdong Province.

Some of the investors had flown in from Hong Kong and India, representatives from the event organizer immigration agency Qiaowai said at the roadshow.

Investors were told that the EB-5 immigration investment program calls for an investment of $500,000 each to fast-track a US green card. The EB-5 visa is an immigration program that allows foreigners to invest in US projects that create jobs in exchange for permanent US residency.

Potential investors were required to reserve in advance to participate in the presentation, several participants told the Global Times on Saturday.

"I made a call to Qiaowai on Tuesday, and the salesperson asked me if I have around 4 million yuan ($57,995) in cash in the bank," a potential investor said, noting that when he said yes, the salesperson also asked him whether or not he could prove his money had been legitimately acquired.

A 40-year-old investor from Chengdu, capital of Southwest China's Sichuan Province, said she was flying to Shenzhen on Saturday morning after seeing media reports about the event. "I have three children, one of whom was born in the US. I was considering applying for the EB-5 immigration visa for my two other children," she told the Global Times on Saturday.

When asked about the risks involved with the project jointly developed by Kushner Companies and KABR Group, she said that both she and her husband believed that the project is "reliable" because Trump is involved, and it therefore has government backing.

"That's why I made the trip," she said after talking with a salesperson from Qiaowai.

"I'm hesitating because I was told that I need to wait for at least five years to submit the application," a 29-year-old investor surnamed Li told the Global Times on Sunday.

Hao Junbo, a lawyer at Beijing-based Hao Law Firm, said the only thing that makes this project stands out is that for the many other projects, investors have no idea of who was behind them, but for this one they know it is the Kushner family doing it.

Commenting on investors' reactions, Hao said that they are natural.

"As this project has a well-known family  behind it, in investors' hearts there is an increased degree of trust, feeling this one might be more reliable. On the other hand, rationality will persuade investors that the US government won't in any way endorse the project, so both reactions are normal," Hao told the Global Times on Sunday.

At Sunday's roadshow, investors were urged to invest now because "the EB-5 visa policy will be changed sooner, not later," and probably with a longer waiting period, lower visa quota and higher investment standard, immigration lawyer Nneka Ukpai said at the presentation, adding that it is not a matter of "whether" but rather "when."

In May, Trump signed a budget deal that included an extension of the EB-5 visa's authorization till October.

One or two investors signed investment agreements with Qiaowai during the presentation on Sunday, according to a senior executive from the company.

At the roadshows in Guangdong, nobody from the Kushner Companies, including Kushner's sister Nicole Meyer, who appeared at the Beijing and Shanghai presentations last week, showed up in Shenzhen. The absence was due to "business reasons," Qiaowai's representative explained.

Hao suspected that the absence of Kushner's sister Nicole Meyer was due to media attention.

The need of her being present at the promotional event diminished after the media hype over this gave the event enough publicity, noted Hao.