What Does the Long-Term Future Look Like for EB-5? 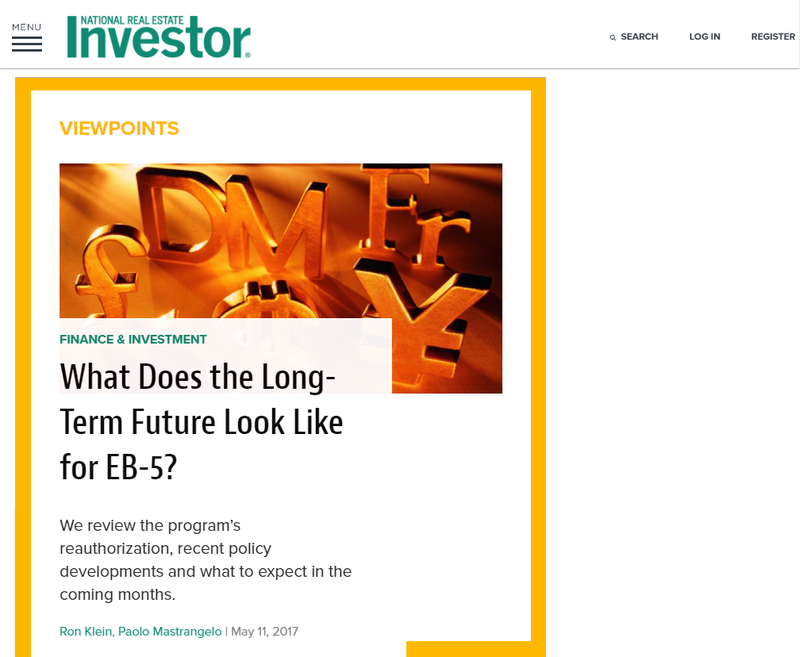 As we have seen in the initial months of President Donald Trump’s presidency, the 2016 elections ushered in a new era of policy deliberation over issues of importance to both the American and the global economy. This is of no surprise, since for 84 percent of voters in the U.S. the economy and jobs were the most important issues in the 2016 elections.

Larger debates are percolating over issues impacting real estate and commercial lending—from tax reform to infrastructure investment and to global trade negotiations. However, in addition to these big-ticket battles, the reform and long-term fate of less public but still critical programs like EB-5, which are often an essential piece of commercial real estate deals, are now in the crosshairs.

Below we review the program’s reauthorization, recent policy developments and what to expect in the coming months. In particular, we focus on four political elements impacting the program.

First, the EB-5 program was again reauthorized until September 30th, 2017, commensurate with the remainder of the federal fiscal budget for fiscal year 2017. This reauthorization ensures that the important job creation program will continue into 2017 and that investors will continue to have an opportunity to participate. No changes were made—all existing aspects of the program, including investment amounts, remain the same.

The “clean” reauthorization of EB-5 is, however, an important result, and not only for the continuation of numerous projects and investments underway. It also reflects the continued and broad support for the programs’ mission and positive economic results—even as legislators and policy makers have been deliberating reforms and changes. The Real Estate Roundtable and the U.S. Chamber of Commerce, for example, continue to signal important industry-wide support for the program.

Before the final reauthorization occurred, however, it should be noted that over the last few months a number of proposals to reform the EB-5 program were debated in Congress. It is generally believed that these diverse proposals will be the framework for the upcoming legislative debate over the EB-5 program. Some of these legislative proposals change the Targeted Employment Area, including definitions of urban and rural areas and minimum investment requirements. These changes could, if developed inconsistently, create challenges for commercial real estate deals and projects already underway. Other proposals seek to improve overall transparency in the program, to strengthen investor protections, and to decrease visa backlogs. Many of these changes would serve to increase the program’s effectiveness and free up more capital for projects.

Second, the Obama administration proposed changes to the EB-5 program at the end of 2016. These proposed rules, offered under the authority of the U.S. Customs and Immigration Services, are currently in play, until and unless they are derailed by a “delay” rule with substantive follow-up which changes or eliminates the rule. At this time, there has been no formal commitment by the Trump administration as to whether it will allow the rule to go into effect, or whether they will propose a rule reconsidering its terms. Many industry participants and organizations have submitted comments to USCIS discussing objections and proposed changes to the Obama Rule. Given the early stages of the Administration and internal political battles inside the White House, we do not yet know how the President and his advisors will respond to agency, congressional and stakeholder comments on the program. This is a critical political piece of the puzzle—the White House and USCIS need to formulate a clear policy on the program, which will then impact how Congress deals with the program.

Third, there is undeniable and mounting pressure on legislators to work with industry leaders and to find compromise on reforming the EB-5 program. The situation, however, is complex. Senator Chuck Grassley (R-IA)—a detractor—and Senator Pat Leahy (D-VT), a critic of the use of the program by urban developers, continue to draft and introduce comprehensive overhauls of the program, which garner both support and criticism. Several other Senators and House leaders continue to advocate for balanced reforms that will ensure the program can thrive. There are also some newly elected House and Senate members that have never been involved in the debate. Some of them represent communities that benefit from the EB-5 program. In sum, although this is not a partisan issue, the program continues to engender strong differences of opinion on policy. Given broad industry support, however, there will likely be pressure on legislators to work with industry leaders to find compromise. It is likely that legislative reform efforts, at a minimum, will focus on transparency measures to create accountability and integrity for the investor. Investment amounts will likely be increased, while TEA’s may be defined differently in order to incentivize investments in new areas of the U.S. (in addition to current areas). At the same time, reauthorization of the program may be lengthened from the usual one-year or less to a three- or five-year period of time, which will be an important boost for long-term participation and investor confidence.

Fourth and lastly, as with every nascent Presidential Administration, the key priority is to fill cabinet and agency appointments and to move on top-ticket policy items. On the latter, the Administration has moved fairly quickly at outlining priorities from healthcare to tax reform. But on the former, including making appointments (which then need Senate confirmations), the Administration has been slower. For instance the Department of Homeland Security’s U.S. Customs and Immigration Service (which oversees the EB-5 program), is without a Director. The administration recently nominated Lee Francis Cissna as Director of USCIS. In addition, former Senate staff who in the past have held unfavorable views of the program, are now in political positions inside USCIS. These appointments and staffing decisions are important because they represent a strong possibility that the interpretation, administration and enforcement of the EB-5 program will have a direct line to Senator Grassley and there is a high likelihood that many of their positions will be contrary to the interests of many industry stakeholders. As a result, any legislation or rule adopted needs to be constructed as clear and unambiguous as possible to avoid misdirected interpretation and administration of the program.

Given the complex policy deliberations and political steps needed to properly reform the EB-5 program, we are not surprised that Congress cleanly extend the program until the end of 2017 with no change, giving legislators and industry stakeholders the remainder of the year to enact reforms.

However, an increasing public and Congressional drumbeat for reform create uncertainty in potential agency action and staffing under President Trump. Nevertheless, we believe that any efforts will also be driven and shaped by stakeholders who understand the nuances of the program, want to see it succeed and want to continue creating U.S. jobs.