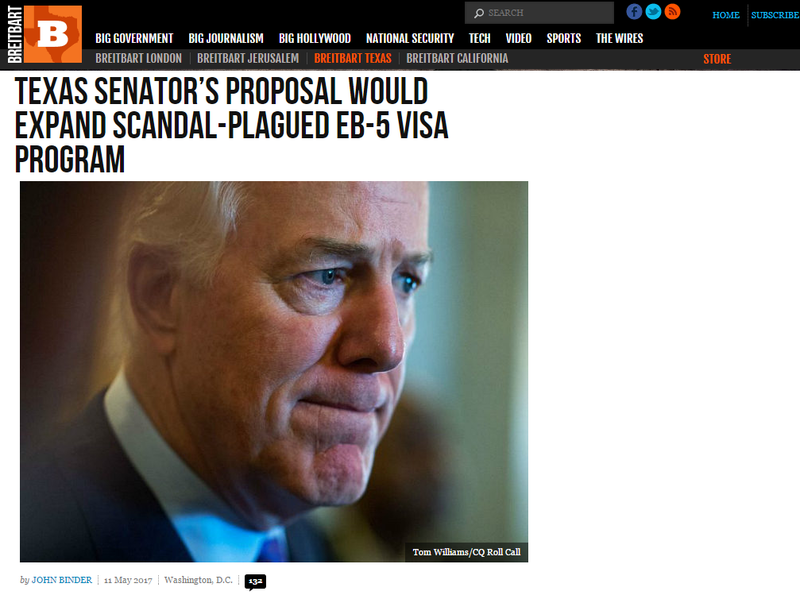 Senator John Cornyn (R-TX) is looking to expand the number of wealthy foreign nationals who can pay their way to permanent legal residency in the U.S. under the EB-5 visa.

Cornyn is floating draft legislation that would essentially erase the current cap for EB-5 visas, which is set at 10,000 a year. Under the EB-5 visa, foreign nationals can claim that they will invest $500,000 and thus receive Green Cards for their family for at least two years, with pathways to citizenship available as well. The only requirement is that the EB-5 holder create 10 U.S. jobs.

Currently, the family and children of those foreign investors are included in the 10,000 EB-5 visa cap, but under Cornyn’s legislation, that would not longer be the case.

A fellow with the Center for Immigration Studies (CIS), David North, who recently testified before Congress on the EB-5 visa, told Breitbart Texas that raising the cap would potentially triple the number of foreign nationals entering the U.S. through the visa every year.

“That means tripling the number of people,” North said. “The thing is, Congress has, for something like 90 years, been putting numerical limits on migration and … the limit is 10,000 visas so that we don’t get any more people than that.”

North said that for the current 10,000 visas cap, roughly 4,000 investors enter the U.S. every year, not including their families. With Cornyn’s proposed increase, though, North told Breitbart Texas there could be 10,000 investors, alone, with approximately 25,000 foreign nationals altogether entering the U.S. every year under the program.

CIS Director Mark Krikorian called the proposed expansion of the EB-5 visa, which has been riddled with fraud and corruption since its conception, “outrageous.”

“The point of exempting family members is to give out massive amounts of visas,” Krikorian told Breitbart Texas.

North told Breitbart Texas that Cornyn’s proposal to dramatically raise the cap could be a bargaining tool designed to ultimately keep the EB-5 visa program intact.

An extension of the EB-5 visa was slipped into a recent spending bill passed by the House, as Breitbart Texas reported. EB-5 immigrant visa-holders primarily come to the U.S. from China. The program has endured public embarrassment for years, as more fraud cases involving the program come to light.

Breitbart Texas requested comment from Sen. Cornyn but did not receive a response by press time.