Getting around H1B visa: Now, US firms target Indians with EB5 – the ‘Golden Visa’ 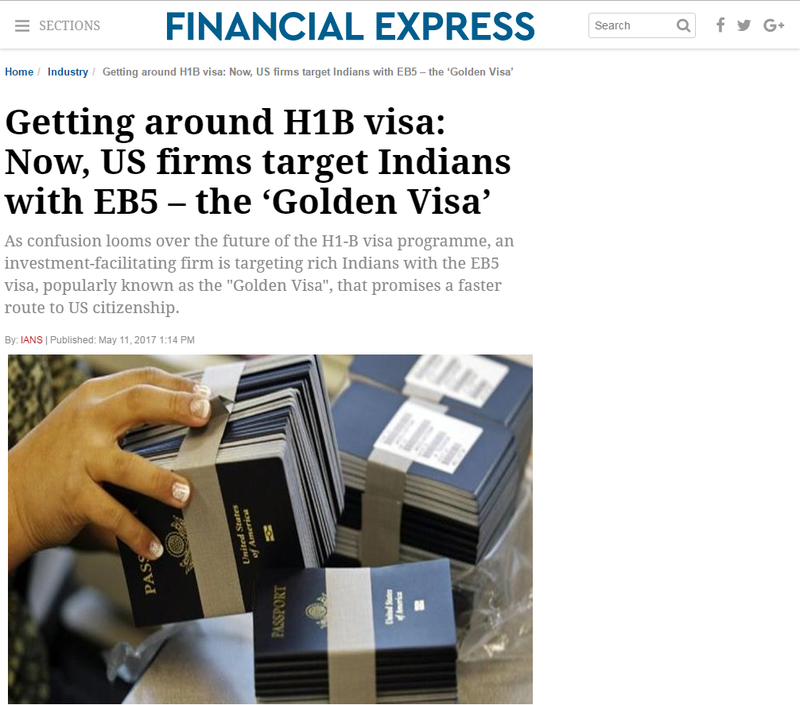 As confusion looms over the future of the H1-B visa programme, an investment-facilitating firm is targeting rich Indians with the EB5 visa, popularly known as the “Golden Visa”, that promises a faster route to US citizenship. The US Immigration Fund (USIF), which launched its Indian operations this year, is confident that affluent Indians who invest half a million dollars or more in a Targeted Employment Area (TEA) — creating 10 or more jobs — under the EB5 visa programme, will get US citizenship in a shorter time compared to the H1-B visa programme. US President Donald Trump has called for stricter norms for issuance of H1-B visas, largely availed of by Indian IT firms. A private member’s bill was also introduced earlier this year in the US Congress by Democrat Zoe Lofgren which seeks to increase the minimum salary of an H1-B visa holder to a whopping $130,000 from the current minimum of $60,000.

“With the H1-B environment becoming tougher and tougher, demand for EB5 has gone up,” Andrew Graves, USIF’s Director of Business Development in India, told IANS. “Indians are becoming more aware of the EB5 visa programme,” he said. Introduced by then US President Bill Clinton in 1990, the EB5 visa programme allows an individual to invest $500,000 in either of two TEAs — a high unemployment area in a US metropolis or a rural area outside of a metro — or $1 million in a non-TEA area that can create 10 or more jobs. Earlier this month, the US Congress extended the programme, which has seen much controversy over the merits of its applicants, till September 30 this year.

Graves explained that once an application is filed for an EB5 visa programme, the applicant has to fill in a I526 form under a US attorney after which he or she gets a temporary US Green Card for 16 months. Once the conditions are met, around two years later, the applicant has to fill in the I829 form which leads to lawful permanent residency in the US. “So, the EB5 offers a certain way for US citizenship within roughly five years,” Graves said. The USIF clams to have a proven track record of 100 per cent approval rating from the US Citizenship and Immigration Services (USCIS) on all adjudicated projects.

It has 24 projects in the real estate sector to its credit with $3.2 billion in EB5 capital that includes 6,400 investors. China is the largest beneficiary of the EB5 visa programme, accounting for 75.6 per cent or over 7,500 visas. India is sixth in the list with 149 visas after Vietnam (334), South Korea (260), Taiwan (205) and Brazil (130). But Graves feels that Indians can make it to the second spot after China. “We are 100 per cent sure that India will occupy a strong second place after China,” he said.

Given the uncertainty over the H1-B visa programme, more and more Indians graduating from US universities are opting for the EB5 visa for US citizenship. The advantage: If an H1-B visa holder is fired from his or her job, he or she will have to leave the US along with family whereas once permanent residency is attained, he or she is no longer dependent on others for staying in the US as long as the person is law-abiding and renews the Green Card on time.

But how can a fresh Indian graduate in the US afford to invest a minimum of $500,000 to apply for an EB5 visa? “It usually comes as a gift from the family (to ensure the son or daughter’s future),” Graves said, indicating that only the more affluent Indians can afford the “Golden Visa”.