Kushner family won't pitch for funds in China after criticism 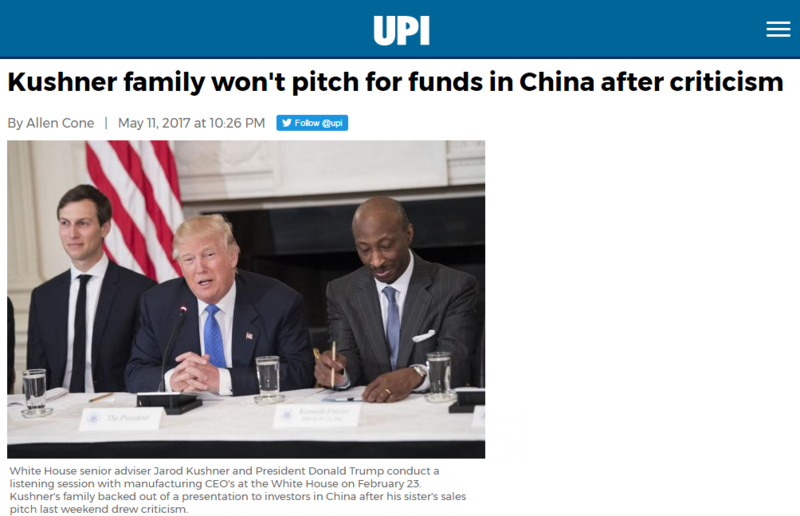 White House senior adviser Jared Kushner's family backed out of a presentation to investors in China after his sister's sales pitch last weekend drew criticism though he no longer is associated with the family business.

Nicole Kushner Meyer and other executives won't attend investor presentations in Shenzhen and Guangzhou on Saturday, a spokesman for Kushner Companies told CNN on Thursday.

James Yolles, a Kushner Company spokesman, declined to say to Bloomberg whether a third party would promote the project on its behalf.

Meyer mentioned her brother and his job as a top White House adviser during the sales pitch. Jared Kushner is married to President Donald Trump's daughter Ivanka.

Speaking in a Ritz Carlton ballroom, Meyer said the project "means a lot to me and my entire family."

EB-5 visas allow immigrants a path to a green card if they create jobs in the United States by investing more than $500,000 in a project.

Potential investors in the Kushner project were told they should act quickly because the EB-5 program might raise the required minimum investment. Trump has vowed to severely tighten the use of work visas.

The Kushner Companies are a diversified real estate organization headquartered in New York City with 20,000 multifamily apartments and 13 million square feet of office, industrial and retail space in New York, New Jersey, Pennsylvania, Maryland, Ohio and Illinois, according to the company website.

Kushner Companies, in an apology, said mentioning Jared Jushner wasn't intended to lure investors but rather to note that her brother had left the company to move into government.

Sen. Chuck Grassley, an Iowa Republican who earlier this year introduced bipartisan legislation to end the EB-5 program, criticized Meyer in an email Thursday to the Department of Homeland Security.

"As you know, EB-5 applicants ordinarily wait at least two years for a petition to be processed and for visas to become available," he wrote. "Ms. Meyer's statements, however, could seem to imply that foreign nationals who invest with the Kushner Company will receive special treatment and expedited approval.