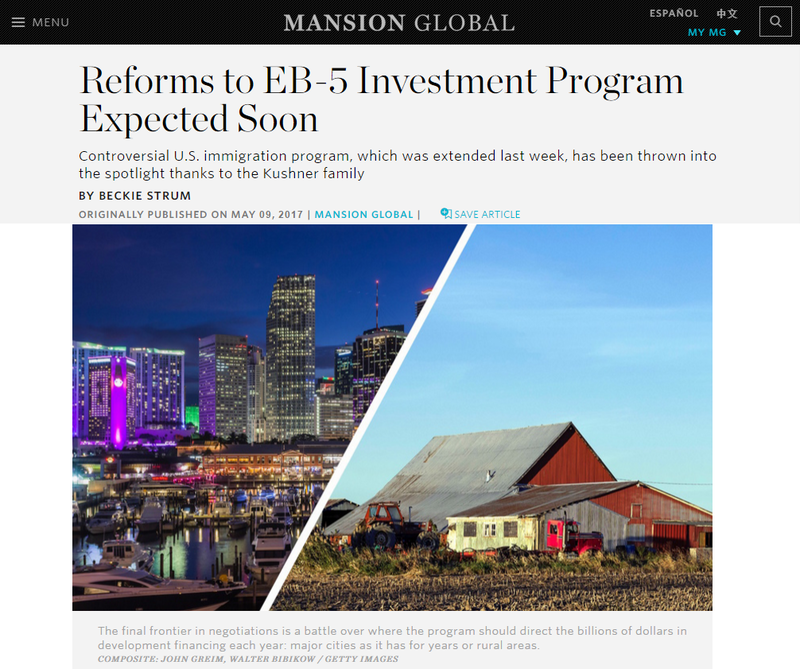 U.S. policy makers are expecting to overhaul EB-5 a lot sooner than its September expiration date. The controversial U.S. immigration program—a visa path for wealthy foreigners—is suddenly in the national spotlight thanks to the family of top presidential adviser Jared Kushner.

Mr. Kushner’s sister, Nicole Meyer, kicked up an ethics dilemma last week after promoting the company’s connection to President Donald Trump’s inner circle while meeting with EB-5 investors in China, where Kushner Companies is hoping to attract financing for a Jersey City housing development. The 27-year-old visa program, immensely popular among the Chinese, allows foreigners to obtain green cards by investing at least $500,000 in a U.S. project.

Lawmakers voted Thursday to extend EB-5 until Sept. 30 as part of a $1.2 trillion federal funding bill. But this latest short-term extension is different, insiders say, as they’re expecting to reach a deal on reforms within the next month or two.

“The reality is, unlike every other time they kicked it forward before, there are active negotiations,” said Ronnie Fieldstone, a Miami lawyer who leads the EB-5 Law Group at firm Arnstein & Lehr.

The final frontier in negotiations—and a major sticking point—is a battle over where the program should direct the billions of dollars in development financing each year. Some say EB-5 should do as it was originally intended when enacted in 1990: aid rural regions and distressed urban areas, rather than helping big developers fund luxury hotels and apartment buildings.

For instance, the mega development Hudson Yards, on the West Side of Manhattan, which includes multi-million-dollar condo units, offices and upscale retail space, raised at least $600 million for its first phase through EB-5 funding, according to New York University’s Center for Real Estate Finance Research.

A new luxury condo in Miami called Panorama City raised 6% of its financing from EB-5 investors, according to the NYU research center. Other high-end projects in wealthy cities include apartment building 67 Eleventh in Manhattan; upscale, mixed-use building Hollywood Park in Los Angeles; and the Pierce Boston/Birch Point offices and condos in Boston.

It has also directly benefited President Donald Trump and his top adviser and son-in-law Jared Kushner, who reportedly used EB-5 investors to finance Trump Bay Street, a luxury apartment complex in Jersey City, New Jersey, which they jointly developed and opened in November.

One camp comprised of urban lawmakers ranging from Sen. John Cornyn, a Republican from Texas, to Sen. Chuck Schumer, a Democrat from New York, are resisting major changes to the program that would redirect money away from places like Manhattan, Dallas, Miami and Los Angeles in favor of depressed areas.

Last week, Mr. Cornyn proposed greatly reducing the incentive to invest in needier districts, dubbed “target employment areas,” or TEAs. He wants to raise the minimum investment in a TEA to $800,000 (from $500,000), while lowering the minimum for non-TEAs to $925,000 (from $1 million), Mr. Fieldstone said, citing Mr. Cornyn’s draft legislation.