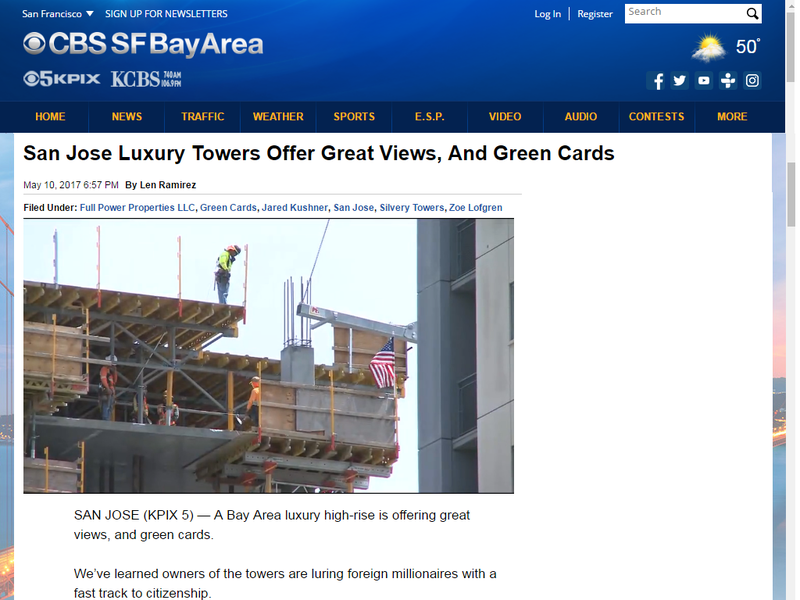 We’ve learned owners of the towers are luring foreign millionaires with a fast track to citizenship.

It’s billed as one of the most luxurious properties in downtown San Jose, but the upscale development is facing new scrutiny.

The owners are using a controversial visa program to attract foreign investors.

Foreign investors can get more than a return on their investment, they can get a clear pathway to U.S. residency.

Despite an American flag on the side of the building, the money behind the project is mostly coming from Chinese millionaires lured by a controversial immigrant visa program that promises them legal U.S. residency if they invest at least $500,000.

Some are calling it the buying and selling of Green Cards.

But with all this money flying around, local workers say they’re not getting a piece of the action.

Al Gonzalez, the President of Plumbers and Steamfitters Local 393 said, “I couldn’t believe that somebody could actually come in and buy what basically comes down to a Green Card.”

Gonzalez was shocked when he discovered a Chinese luxury real estate website advertising the Silvery Towers as San Jose’s most prosperous downtown residential project with 200 EB-5 vacancies waiting for investors and “your first choice to immigrate to the USA!”

This is hard for Gonzalez to swallow because he’s been fighting the project over its hiring of non-union workers from outside areas who make less money.

“They’re bringing in folks from other countries and not paying the workers, us, who live in the community, not pay us a family sustaining wage to be on that project,” Gonzalez said.

The EB-5 visa is almost 30 years old. It was designed to spur foreign investment in rural, depressed or high-unemployment regions. And it does offer foreign investors U.S. Residency for them and their families.

But Congresswoman Zoe Lofgren says the program has been abused.

“The way the investment for disadvantaged localities has been administered, has been outrageous,” Lofgren said.

The program got headlines recently when the sister of President Donald Trump’s son-in-law and advisor Jared Kushner used EB-5’s to court Chinese investors to a Kushner high-rise in New Jersey with views of Manhattan.

“There’s been fraud that needs to be stopped,” Lofgren said, adding that previous reform bills have gone nowhere.

She was not aware of the Silvery Towers use of the EB-5 visas to lure investors, but with Santa Clara County’s current 3.5 percent unemployment rate, she said San Jose would probably not qualify as a depressed area.

“So we’ve been picketing for the last few months, just trying to make people aware of what’s going on,” Gonzalez said.

KPIX 5 reached out to the developer listed on the worksite, Full Power Properties LLC, for comment but were told that no one was available.